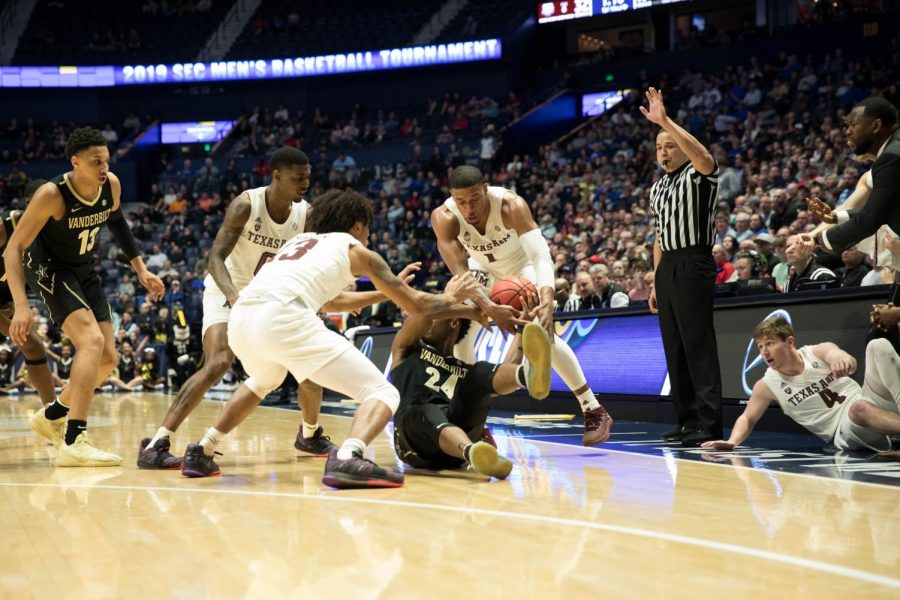 The nightmare of the 2018-2019 Vanderbilt Commodores men’s basketball season has finally reached its long awaited end.

Over the past few months, Vanderbilt has hopped, skipped, and jumped their way to not just the worst record in Commodore history, but the the worst record in SEC history. Their 0-18 in-conference record had never been matched in the modern-day era, and it solidified them the humiliating fourteenth seed in the SEC tournament. On Wednesday night, it became 0-19: they played the eleventh seeded Texas A&M Aggies in front of a large Bridgestone Arena crowd, and Vanderbilt went down swinging one last time by a score of 69-52.

Just as they’ve done so many times this season, the Commodores came out the gates with hope. Saben Lee was consistently finding his way to the basket with ease, and after a quick four points, he began to seek the help of his teammates. Four minutes later, with the game knotted up, Lee continued to drive through the lane–this time, facing a congested paint. He remained calm and collected, something the Commodores have struggled to do for a full forty minutes, and elegantly dumped the ball off to open teammates.

Slowly but surely, however, Vanderbilt began to slip.

Saben Lee’s calm demeanor quickly faded, and he served as just a microcosm of this team’s emotions. His free throw woes continued, missing three of four from the charity stripe in the ensuing two minutes. These misses, coupled with on-ball pressure from the Aggies, caused him to turn the ball over.

He panicked, and he wasn’t the only one.

Texas A&M continued to push the gas pedal, running a fast break offense early and often. They hoped to catch the nervous Commodores off-guard, and they did so with ease. The Aggies fast break approach proved no match for Vanderbilt’s transition defense; nearly every Aggie rebound was pushed onto a discombobulated Vanderbilt defense.

The Commodores were not out of this game, however, until roughly 8 minutes through the first half. The Aggies continued to hustle up and down the court, but this time, they buried Vanderbilt for the remainder of the game.

Texas A&M corralled a rebound and quickly advanced the ball, before lobbing a perfect alley-oop pass to the high-flying Savion Flagg. Flagg proceeded to hammer home a windmill jam that engaged the Aggie crowd and silenced the local Commodore fanbase for the remainder of the contest.

It’s hard to understand just how Texas A&M, a sub-.500 SEC opponent, was able to put the nail in the coffin just eight minutes through a forty minute game. Against the Commodores, who continued to make the correctable mistakes they’ve suffered from all season, it’s not just possible to bury them–for the Aggies, it was easy.

Vanderbilt constantly turned the ball over and couldn’t get in a rhythm, and the Aggies never once looked back.

“Our first half didn’t get off to a great start,” said Coach Drew. “We didn’t make many shots, and at halftime we really had a heart to heart talk: how do we want to play this second half out? How do we want things to go? I credit our guys; we talked about fight, we talked about heart, we talked about competing and I think we found a group out there that for the last 12 minutes really played with a lot of fight and a lot of togetherness.”

Even after they missed all ten first half three point attempts, they continued to shoot thirteen more in the second. Of those thirteen, they made just three– good for 21.4% from behind the arc on the night. Similarly, their abysmal 37.5% from the line in the first hardly improved. They ended the game shooting well below the league average at 64.7%.

Sadly, that 64.7% is better than the Commodores have shot from the stripe in over half of their in-conference games this season.

They let the Aggies sweep the offensive glass, another season-long struggle, without any challenge.

There was a four minute run during which the Commodores showed some sign of life, but even these signs would perish, along with their season.

With just ten minutes left in the game, Yanni Wetzell scored a quick four points, Lee hammered home a fast break dunk, and finally, on his sixth attempt, Aaron Nesmith got his first three pointer to fall. After Nesmith’s only three of the night, the Commodores narrowed the lead to just ten.

The game, and their season, took its final turn in the opposing direction.

Vanderbilt managed to score just nine points for the remainder of the game–letting up a whopping 16 to the Aggies–and just like that, their season-long suffering came to an end without a conference win.

“It hurts a lot,” said Yanni Wetzell, after his first season as a Commodore ended without a conference win. “We’re all fired up for next season already. It’s going to be a long offseason, but we’re all going to go at it because there’s going to be a sour taste in our mouths. We’re coming back better, for sure.”

Head Coach Bryce Drew avoided answering any questions about his job security, and instead, focused on his players’ outlook.

“My biggest concern is our players,” said Drew. “This has been an emotional ride for them. Adversity that none of us have faced before, and so my first priority is to them. I’m a basketball coach, but I’m also a mentor. I’m also a leader. I also tell their parents I will care for their hearts and their futures, so that’s my big concern. That’s my job; that’s what I do.”