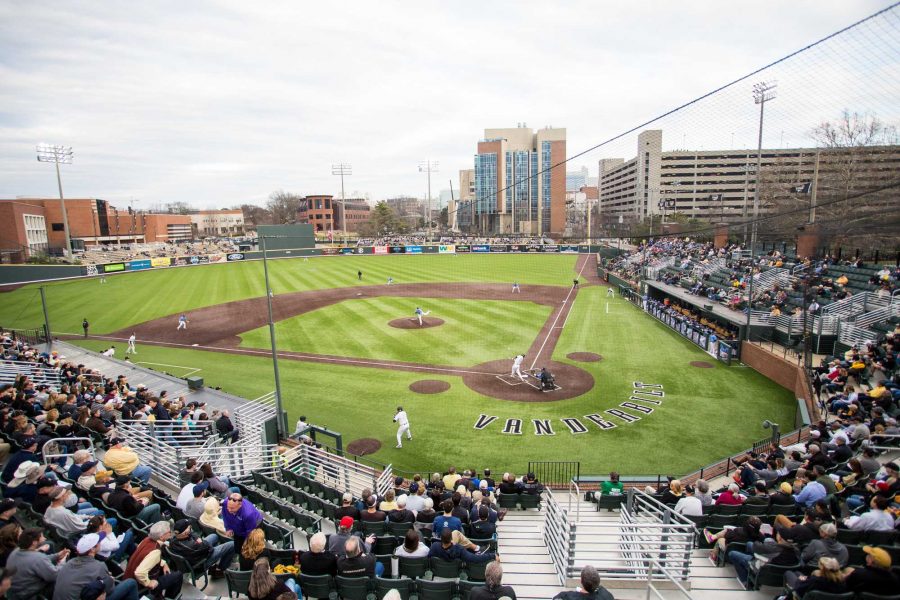 All Vanderbilt athletics will be suspended until March 30, per an email from Interim Chancellor Susan Wente.

The Commodores’ bats were hot early.

Austin Martin hit the second home run of his career, a solo shot over the towering left field wall in the bottom of the first inning. JJ Bleday and Stephen Scott singled before Pat DeMarco singled to center field to bring home Bleday. Ethan Paul followed up with a single to right field to score Scott. Jayson Gonzalez walked on a full count before designated hitter Harrison Ray struck out with bases loaded and two outs to end the inning.

Martin and Bleday extended their hitting streaks to 17 games each dating back to last season.

With a 3-0 lead, Vanderbilt did not let up in the bottom of the second. Cooper Davis led off the inning with a single up the middle. Davis has had a hit in all seven games this season. He finished the night with four hits, a career-high.

Bleday hit a booming two-run home run to right field on an inside fastball to extend the lead to 5-0.

Corbin said of the trio, “They ‘re giving us good at-bats with two strikes. Cooper continues to do a lot of different things offensively. He’s going to show you his game, whether it’s bunting or putting the ball in play with two strikes. JJ’s taking good at bats.”

Bleday said, “Cooper bunts a lot, and A-Mar is an all-around phenomenal hitter and bunter. I just think we use our tools really well.”

Philip Clarke and DeMarco each drew a walk before Paul grounded out.

“Offensively, we went to sleep a little bit after the second inning,” said Corbin.

The bats on both sides were quiet until the top of the fourth, when Southeast Missouri got their offense going with the help of two walks from Vanderbilt starter Zach King. King allowed three earned runs and struck out five in 3.2 innings.

King was hit on a line drive to the pitcher, but he shook it off before issuing his second walk of the inning to load the bases. He was relieved by freshman Ethan Smith.

Smith, making his third appearance of the year, walked the first batter he faced to bring in another run for the Redhawks. He would force a groundout to end the threat.

Corbin said, “The game flipped quick. It was a dogfight. It was 5-3 in the middle part of the game, and we really had to pitch our way out of it.”

In the top of the seventh, Southeast Missouri strung together a pair of singles to put the pressure on Vanderbilt’s two-run lead. With runners at first and second and one out, Corbin replaced Smith with sophomore Tyler Brown, who had not allowed a hit in his previous two appearances.

Brown got out of the jam with two strikeouts, both of them looking.

In the bottom of the seventh, freshman Justyn-Henry Malloy entered the game as a pinch hitter for Ty Duvall, who had pinch hit for Harrison Ray earlier in the game. Malloy’s line drive to left field hit Redhawks left fielder Andrew Keck’s glove before falling in the grass. Malloy would reach second base with the error, and Gonzalez scored from first after singling earlier in the inning.

In the top of the eighth, Brown got into a jam. With runners on first and second and two outs, Brown faced Keck, who was 0-for-2 on the day. Brown struck him out in three pitches.

Bleday responded with a single in the bottom half of the eighth inning. Clarke hit a single to right field, but Bleday slipped rounding second base and was not able to advance to third on the hit. Stephen Scott earned a four-pitch walk to load the bases with one out.

DeMarco came to the plate. He had a single earlier in the game, but he was still feeling the effects of an early-season slump. He struck out swinging on a full count.

Paul came up next and hit a grounder to second base, but Connor Basler bobbled the ball, and Paul was safe on the fielding error. Bleday scored on the play to extend the lead to 7-3.

Gonzalez came up to bat next. He hit a powerful grounder to shortstop, and Tyler Wilbur couldn’t handle the ball. Clarke scored the eighth run of the night for Vanderbilt.

Malloy walked with the bases loaded and two outs to stretch the lead to 9-3.

Vanderbilt had five walks, including a few with the bases loaded.

Corbin said, “In those situations, you can kind of open up your swing a little bit and try to recruit too much bat speed. The next thing you know, you pop the ball up or just miss the ball.” He continued, “When you get into those situations, you need to control yourself and contain adrenaline.”

Davis got his fourth hit of the night with a two-RBI single up the middle to push the lead to 11-3.

AJ Franklin pitched the final frame and earned the save.

Vanderbilt will take on Austin Peay on Wednesday afternoon.