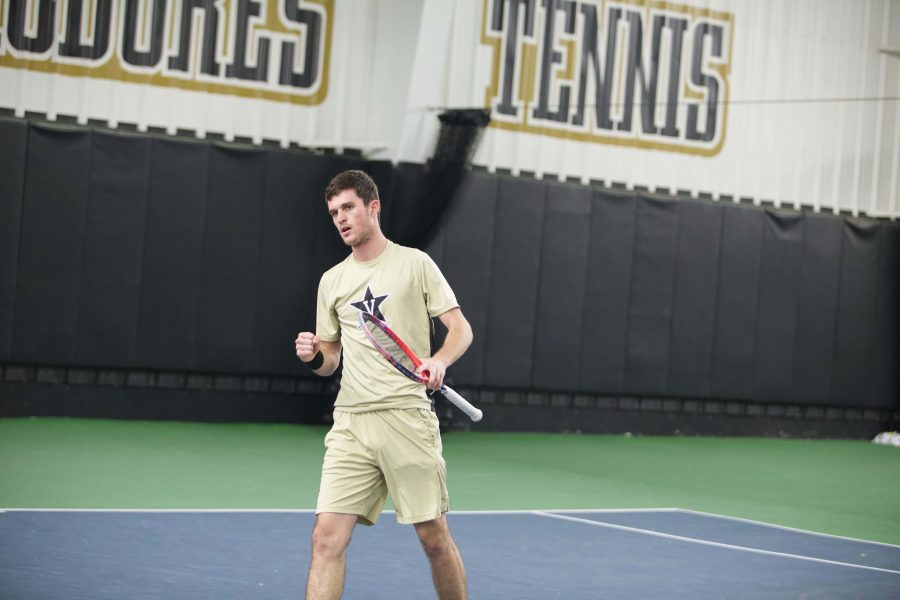 Vanderbilt Tennis competes against Northwestern on January 18th, 2019 (photos by Sophia She).

On Sunday, the Vanderbilt Men’s Tennis team swept their double header against Michigan State and Belmont in dominant fashion, winning 6-1 and 6-0, respectively.

Despite the dominant score
line, the Commodores first match of the day against Michigan State got off to
somewhat of a rocky start. After Vanderbilt and Michigan State split the first
two lines of doubles, Vanderbilt needed a tight 7-5 victory by George Harwell
and Billy Rowe over Michigan State’s John Carlin and Anthony Pero to secure the
doubles point.

“Doubles in the first match
against Michigan State was ragged, not very good, but we found a way to win”
said Vanderbilt head coach Ian Duvenhage.

After successfully
squeaking by in doubles, the Commodores’ nerves seemed to settle, and the team
rolled to three quick singles victories.

At line five, Rowe cruised
to a 6-1, 6-2 victory against Pero. Harwell swiftly defeated the Spartans’ John
Carlin 6-4, 6-1 on court two, and at line four, Vanderbilt freshman Macsem
Sisam clinched the victory with a 6-3, 6-3 win against Carson Gates.

Although Vanderbilt had
already officially won the match, Vanderbilt and Michigan State agreed to allow
the remaining courts to finish.

Shortly after their comfortable victory against the Spartans, the Commodores faced the Belmont Bruins.

Similar to their match
against Michigan State, Vanderbilt had to overcome some sloppy play to secure
the doubles point against the Bruins. After winning at line three, Vanderbilt’s
line two pair of Freeman and Sisam had to fight back from a 3-5 deficit to win
7-5 and to give the Commodores a 1-0 lead.

“It was long day,” said
Duvenhage. “You could see some of the nerves and the fatigue here in the second
match.”

Despite their seemingly
worn-out demeanor, the Commodores cruised in singles play, winning all lines
that were able to finish (all except line six, which ran out of time).

Rowe dominated Belmont’s
Vincent Sterkens 6-3, 6-3. Harwell emerged from a tight first set and routed
Joan Valy 7-5, 6-2, and yet again, Sisam secured the Commodores’ victory with a
6-3, 7-6 win against Zak Khan.

After Vanderbilt clinched,
Klinger and Ferreira finished their matches, each of whom won in a deciding
set.

Even though the Commodores
won both matches in dominant fashion, Duvenhage still believes that the team
needs to improve their composure going forward.

“We need a little more
control in handling our frustration,” said Duvenhage. “We still have to ride
the ups and downs of the match better.”

The Commodores are back in
action on Feb. 15 at the 2019 ITA National Team Indoors Championship in
Chicago, IL.