Essay: Abortion in the Vanderbubble 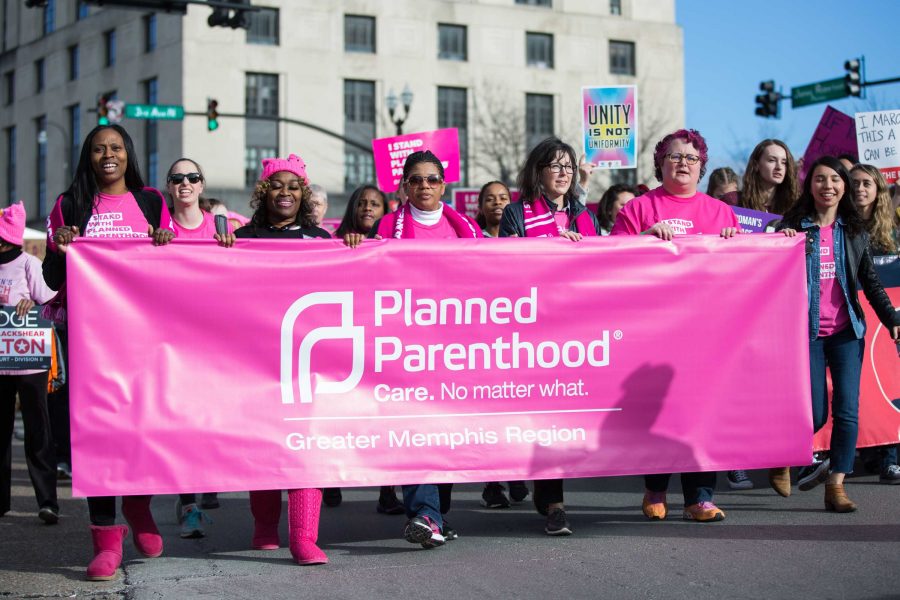 Protesters demonstrate in downtown Nashville as a part of the Women's March 2.0 on Saturday, January 20, 2018. Photo by Claire Barnett // The Vanderbilt Hustler

In moments, the fear is dormant; in others, it is painfully acute. But for many Americans, our ears adjusted a long time ago to the chorus of messages which warn that the bodies we live in do not, in fact, belong to us – that no matter how fiercely we resist, there will always be holes in our armor that mark us as available for public use. (These holes – they tell us – are cursed and privileged to be precisely, divinely dick-shaped.)

I have reason to speculate that another’s perceived right to be inside of my body might override my right to say no. Only one of these “rights” can be absolute.

Every recent conversation I’ve had with my Vanderbilt peers about abortion rights has circled around this same collective sensibility: thick, pulsating fear for our bodies.

We were afraid last December, when the Nashville Planned Parenthood suspended abortion services. The clinic has since announced plans to resume providing abortion services next month, but memories of anti-choice celebration still seem to mock our dreams of self-sovereignty.

Fear hung heavy throughout the arboretum last October, when President Donald Trump nominated federal judge Brett Kavanaugh to the Supreme Court. Kavanaugh’s record of assault allegations plainly suggested his personal disregard for the personhood of women. His record of supporting anti-choice legislation suggests professional disregard for the same. Indeed, an “alleged” sexual predator being chosen to define “justice” felt like a particularly terrifying farce at Vanderbilt, where survivors of sexual assault (and perpetrators) are disproportionately represented.

Some might argue we live in particularly scary times. Roe v. Wade, the landmark 1973 Supreme Court decision securing a person’s right to an abortion, has appeared to be on life support. One New York Times article blamed the president for “constructing the kind of authoritarian state that America was actually founded to overthrow”; or, as one of my professors put it, “democracy is on fire!”

Members of the student body who have only recently been jarred out of that delusion by fear must understand that we’re not trailblazers in the war for reproductive rights; we’re just fresh drafts.

“Some of us have been living in a post-Roe America for quite some time now,” explains Briana Perry, double Vanderbilt grad and co-director of Healthy and Free TN, a reproductive rights coalition.

Perry’s data shows that out of pocket costs for any abortion medication or procedure in Tennessee can start at around $800. For some Vanderbilt students, $800 might be the beer budget for spring break in Gulf Shores. For many, the flexibility of private insurance has always protected us from deciding between our health, our rent and our Natty Lite. But these costs can make obtaining an abortion effectively impossible for patients below a certain income bracket.

In the few weeks it might take to come up with that amount of money, costs can almost double. Abortions beyond 20 weeks gestation are currently (unconstitutionally) banned here; anyone who provides abortion services past that stage could be subject to over a decade in prison. However, Perry tells me, none of the remaining clinics in our state even have the capacity to perform abortions after around 15 weeks – before many people even realize they’re pregnant.

When it comes to abortion, an actively developing pregnancy ensures that time is legal precedent; time is money; and thus, time is luxury. Time holds the unstable balance of identities at stake – mother, incubator; clump of cells, child of God – and dictates which is rights-bearing.

Critically, due to the Hyde Amendment, folks on Medicaid legally cannot apply their insurance to abortion care. In Tennessee, state-funded insurance is also blocked for abortions. Additionally, Medicaid cannot be used for any procedure at a clinic that provides abortion services in Tennessee – even STI testing, pap smears and mammograms – incentivizing more and more clinics to bar patients from exercising their constitutional right to abortion. Scarcity of providers ensures that transportation, lodging and childcare costs trap more and more patients in forced pregnancy.

Democracy has always been on fire, whether we’ve felt the heat or not.

Those of us seeking abortion care in Tennessee are bound to state-mandated counseling wherein doctors are forced to advise patients with scientifically unverified (and sometimes downright false) information regarding the so-called “risks” of the procedure – which is statistically safer than childbirth, wisdom teeth removal, or a colonoscopy. Tennesseans are also required to take an additional 48 hour waiting period before the procedure. When it comes to these restrictions, Perry encourages students to think critically: “what are they really trying to legislate?” How many medical procedures are there in the country wherein patients are legally mandated to take time to… reconsider?

I am daily learning that the contours of “what if” that once cushioned and cooed my own sense of security were never reflective of the American reality. Fear of a “post-Roe apocalypse” highlights our own complicity in the truly barren landscape of bodily autonomy that, for many Americans, is as old as the Mayflower. As one person tweeted, “The Handmaid’s Tale is really a white woman imagining herself on the Underground Railroad.” Democracy has always been on fire, whether we’ve felt the heat or not.

In this moment, the Roe decision might still affirm the right to abortion, but the concentrated efforts of anti-choice agitators to undermine the constitution over the past decade have been wildly successful; Perry has found that, for innumerable Americans, this “right” exists in name only. Perhaps it is more accurate to say that Roe is in a vegetative state. And while some of us at Vanderbilt may not suffer directly under these restrictions, in Perry’s words, “we all are affected by laws that undermine our humanity.”

For some of us, the voices of dehumanization have seemed to mount an unprecedented crescendo over the last three years. And while Trumpian misogyny has been… loud, it hardly seems fair to call him the conductor; our deeper suspicion, perhaps, should be that the president is merely decoration for a well-oiled machine called “the land of the free” that has always and only been anti-freedom by design.

The last couple years have had even those of us with the shiniest of silver spoons – those of us most aloof to the necks being pressed on by the soles of our leather booties – trembling through the credits of The Handmaid’s Tale. The show, which depicts a dystopian society organized around forced childbirth, basically exploded in 2017. While marketed as fiction, the series seemed to strike an unusually personal and timely chord for the Netflix bingers of our campus.

But its not coincidental that the favorite face of this coming apocalypse is Elisabeth Moss. Maybe Jennifer Lawrence, Shailene Woodley, or Emilia Clarke. It seems there’s something jarring, thrilling – sexy, even – to American audiences, about the audacious surrealism of White Woman: Champion of the Slaves.

Hollywood, privilege and whitewashed education curricula make it easy to forget: the dystopia of The Handmaid’s Tale is only fiction because Elisabeth Moss looks like a Tri-Delt. Bodies marked by racial or economic oppression (among others) have always operated under the belief that self-determination is fought for, and freedom is, in fact, alienable.

The fear of our community is based in hypotheticals; our fear is a privilege. If we dare poke our heads outside the Vanderbubble, we might find that rage would be a more appropriate zeitgeist – in a war that is anything but new.

We have justice on our side, and I’ve chosen to believe in the moral arc’s clandestine bend

Fortunately, this also means that the resistance is expert. Seasoned. The resistance has been and will continue to be best guided by those who were born studying the intricacies of American oppression for their own survival. (This fight was never Elisabeth’s to lead, and it won’t be won at the #womensmarch.)

We have justice on our side, and I’ve chosen to believe in the moral arc’s clandestine bend. Our charge is simple: to “make America great”… for the very first time.

Michaela Wiebe is a senior in the College of Arts and Science with a double major in Women’s and Gender Studies and Communications. She works at the Margaret Cunningham Women’s Center, designing and teaching feminist educational programs. In her free time, Michaela enjoys true crime, walking her cat, and missing the ocean. She can be reached at [email protected]