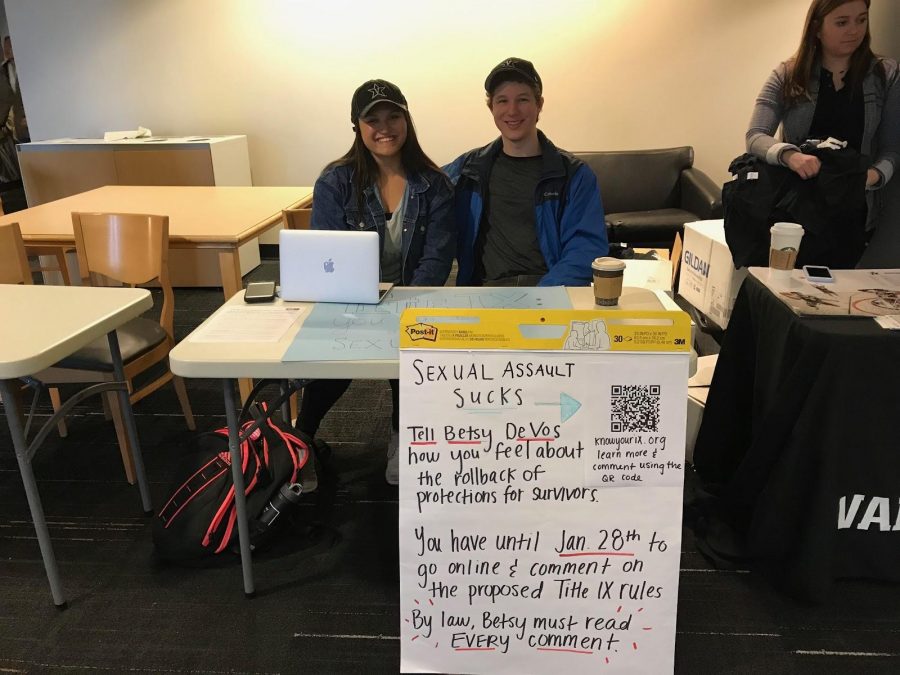 Education Secretary Betsy DeVos is suggesting an overhaul of Title IX regulations regarding how schools are required to deal with sexual misconduct. You can read the full text of the proposed rules here, but campus experts broke down what these changes could mean for Vanderbilt at a panel hosted by VSG’s Sexual Assault Awareness and Prevention Committee on January 16.

One of the points discussed was the proposed inclusion of live hearings for sexual assault accusations on college campuses. Live hearings would mean that both sides have the ability to bring in an attorney to cross-examine the opposing side. While legal representation might make this practice resemble a court of law, other aspects of Title IX investigations bear no semblance to a legal trial, according to Molly S. Zlock, Director of Title IX and Title IX Coordinator. For example, there is no judge in the room to hear objections, and the hearings would generally resemble a “free-for-all,” she said.

“My theory is that live hearings, the presumption of innocence and raising the standard of evidence [as proposed in the changes to Title IX] will have a chilling effect, if not a silencing effect, on survivors coming forward to report on our campus” said Cara Tuttle Bell, Director of Project Safe Center for Sexual Misconduct Prevention and Response.

The proposed changes include implementing the standard of presumption of innocence. This refers to assuming that the accused is innocent until proven guilty. Currently, schools use preponderance of the evidence as their standard in all student disciplinary proceedings, including cases of sexual assault. In preponderance of the evidence, investigations begin with equal likelihoods that each side is telling the truth, allowing for a decision to be made if the decision is “more probable than not” as opposed to beyond a reasonable doubt.

Presumption of innocence is usually employed in criminal cases, but as Tuttle Bell pointed out, preponderance of the evidence is common of civil cases. Civil cases usually handle private disputes regarding issues such as unemployment benefits or child support, while criminal cases normally handle crimes such as theft and murder.

“We’re not a criminal system. We’re not putting anyone in prison. We’re talking about a standard of conduct that you’re supposed to follow as a student” said Tuttle Bell. “The worst thing we can do is say ‘You can’t go to school here’ or ‘You can’t work here.’ If we have such a swift action that we can take for cheating, we should not be taking sexual assault less seriously.”

In response to concerns about false sexual assault allegations, the heads of Title IX and Project Safe stressed the confidence they have in Vanderbilt’s investigative process.

“Well-meaning humans who have chosen this as their profession try very hard to do their jobs the right way. It’s high stakes and they know that. I am very comfortable with the decisions I’m aware of. We have a very high level of proof” said Tuttle Bell. “Some expelled students have sued the university, and have not been found to have been wrongly expelled after being investigated again. We stand by our work.”

Moreover, Zlock said that she handles every Title IX investigation with the expectation that the accused could sue Vanderbilt to challenge the findings of the investigation.

“I would be the person sitting on the stand [if an accused student sued]” said Zlock. “And I am not going to allow an investigation to not proceed correctly, because I’ll have to defend that. I really do believe and protect the integrity of our process.”

To play a role in campus policies regarding sexual misconduct, students can submit comments on the proposed change in policy through January 28 here.

“The more people who comment, the stronger the message we can send that we believe in supporting survivors” said Télyse Masaoay, Chairperson of the Vanderbilt Student Government Sexual Assault Awareness and Prevention Committee and Vanderbilt senior.

In addition, Tuttle Bell urged students to complete the campus climate surveys that will be sent out on February 1st to help offices like Project Safe and Title IX do their jobs more effectively.

“[The proposed changes] are alarming, and I hope they change before they become law, or that they never become law,” Tuttle Bell said. “As a private school, we’re going to have some room to make some choices [about how we handle sexual misconduct] and we have no intentions of changing our process except in the ways that we have to.”