Feeling Right at Home: Brinae Alexander and Jordyn Cambridge want to build a winner in their backyard 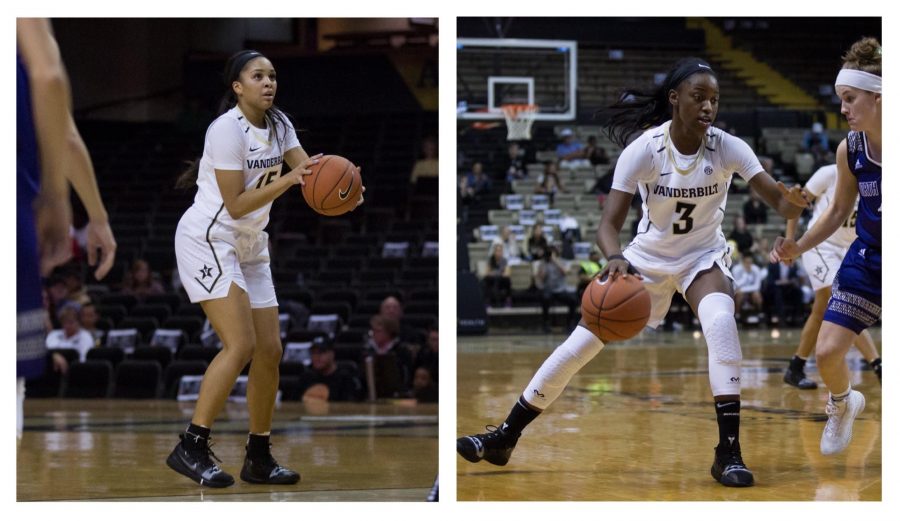 Each year, students around the country leave their friends and family behind to go to their dream college away from home.

But the story goes a little differently for freshman guards and Nashville natives Jordyn Cambridge and Brinae Alexander.

The two best friends committed to play basketball for Vanderbilt, their hometown school, in May 2017. They didn’t plan to go to college together, and didn’t expect that they would end up at Vanderbilt, either, but fate lead them both to West End

Coach Stephanie White emphasized that she and her staff never pressured the pair to commit together. Alexander and Cambridge were recruited separately as local talents, and she wanted both of the highly-touted prospects to join her class simply because of their individual talents.

Growing Up On The Court

Alexander and Cambridge played on the Tennessee Pride AAU team in fourth grade, and they continued to play together until Jordyn left the team for Tennessee Select during fifth and sixth grade.

The separation did not last long, though.

“We played them, and they beat us by like 40,” Cambridge said. “And then Brinae went to her mom after the game and she said ‘We have to get Jordyn off that purple team.’ The next week, I was at practice with Tennessee Pride.”

“Ever since then, we’ve played on Tennessee Pride, and then we went to Tennessee Flight, which is where we’ve been since seventh grade.”

The two attended different Nashville-area high schools, but they stayed close on and off the court. Jordyn played for Ensworth, while Brinae played for Riverdale High School.

Alexander said, “Jordyn is like my sister. We just know where the other is at all times. Jordyn and I have never been in a big fight. If someone happens on the court that makes me mad, it makes her mad, too.”

“We just work so well together,” Cambridge said. “I think the fact that we know each other so well, it carries over on the court. We’ll know when the other is about to do something, like I know when she’s about to cut.”

As they got older, college basketball recruiting started. Cambridge was contacted by Vanderbilt when she was in eighth grade.

“It was our sophomore year, and we were just joking around about going to school together,” Alexander said. “But we never really knew that we were going to [play together in college]. It was just a thing we joked about.”

Jordyn said, “We were like ‘we should go to school together to be an elite duo,’ but we were joking. We never thought that we actually would.”

Coach White said that the two were some of her staff’s first targets when she was hired as the head coach in May 2016.

White said, “Local kids take pride from their local communities. I was a local kid that went to my local college as well. We want to get the best players from Tennessee to come to Vanderbilt. Those two who are right in our backyard are really the first kids that we’ve been able to secure locally.”

Neither Cambridge nor Alexander had previously considered playing for their hometown team.

Cambridge grew up a Tennessee fan, and Alexander just never had Vanderbilt cross her mind.

After Cambridge injured her knee in her junior year of high school, she realized Vanderbilt was an ideal place for her. White’s staff stuck with her as she had to sit on the bench and rehab her knee while other colleges pulled their scholarship offers.

Cambridge decided to commit to Vanderbilt before her senior year of high school. She told Alexander of her plan, then waited to hear her reaction.

Alexander said, “When [Jordyn] called and told me [she was going to Vanderbilt], it just started making more sense.”

“One or two weeks later, she called me, and I thought she was going to tell me that she was committing somewhere else, so I was scared,” Cambridge said. “Then, she said ‘I’m going to Vanderbilt with you.’”

The two committed to the Commodores at the same time.

“We were on FaceTime, and we had our tweets ready on the count of three, said Cambridge.

Their families were also thrilled with the decision. As the two grew up playing on many of the same travel teams, their families became friends with each other as well.

Alexander said, “They’ve always been their own best friends, too, so they were excited to see us come to the same school.”

White said, “It wasn’t like for us that it needed to be a package deal. We would’ve taken either one, but taking both is a bonus.”

In their first season on campus, Alexander and Cambridge have carved out roles on a rebuilding squad.

Cambridge has played in eight games, averaging 15 minutes and three points per game as she works her way back from a torn ACL in high school. Alexander is averaging just under 10 points per game to go along with four rebounds.

Their chemistry on the court has been a joy for coaches to watch.

“They have this unspoken language with each other that helps them,” said White. “I think it also helps us.”

While this season has had its fair share of struggles, the two Nashville kids are still committed for the long haul.

“I’m looking forward to building a program,” Cambridge said. “We’ve had a rough couple of years, so I want to be part of the transition to a really strong program.”