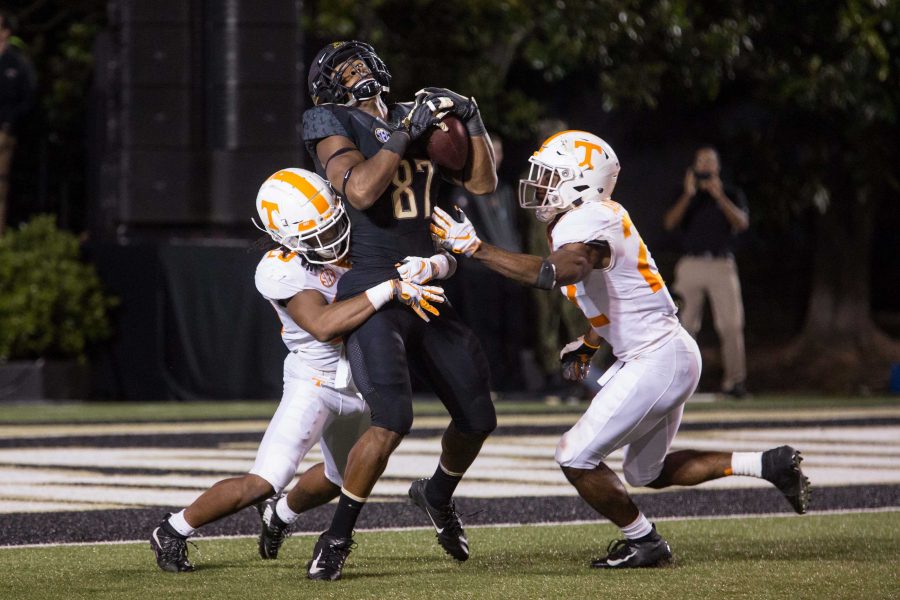 The Commodores defeat the Tennessee Volunteers in football for the third year in a row, ensuring Vanderbilt's bowl eligibilty. The final score was 38-13. (Photo by Claire Barnett)

After a crazy thirteen weeks of SEC football, the regular season has come to an end. The conference had another phenomenal year and eleven of the fourteen teams are bowl eligible.

Here are our final rankings of the SEC teams for the season.

Alabama has been the top team in our rankings all season, and no other team in the SEC or any other conference is all that close to them. Led by Heisman hopeful Tua Tagovailoa, the Crimson Tide have country’s second-ranked offense to go along with the sixth-ranked defense. It is hard to picture any team other than Nick Saban’s squad hoisting the championship trophy come January.

After suffering a beatdown against LSU in the middle of the season, the Bulldogs rebounded strongly with decisive wins against Florida, Kentucky, and Auburn. Jake Fromm has quietly had an outstanding season with 24 touchdown passes and just five interceptions. Georgia still has an opportunity to get into the playoffs if they can win the SEC championship but they are currently double-digit underdogs to Alabama.

Even with LSU losing a crazy seven overtime game to Texas A&M, the Tigers finished with a solid 9-3 record and are in contention for a New Year’s Six bowl. LSU rode their defense for much of the season and ranked top ten in the country in both turnover margin and defensive passing efficiency.

The Gators rebounded from a 4-7 2017 season with a 9-3 one this year under new coach Dan Mullen. While he had his up and downs, Feleipe Franks showed much improvement and finished the season with 23 touchdown passes and only six interceptions. The defense also forced 24 turnovers, good for twelfth in the nation. Florida finished out their season with a 41-14 win over rival Florida State and will probably end up in a New Year’s Six bowl.

The Aggies ended their season with a thrilling win in one of the craziest college football games to date, a 74-72 win against LSU in seven overtimes. They started off slow, thanks to playing both Alabama and Clemson in the first four games of the season, but finished the season strong at 8-4. This was coach Jimbo Fisher’s first year and as he and sophomore quarterback Kellen Mond get more comfortable, the Aggies will be a tough team to beat going forward.

The Wildcats were the biggest surprise of the SEC and maybe of the whole country. They finished with a 9-3 record, their first nine-win season since 1984. While the passing offense struggled for much of the year, Benny Snell Jr. led the Wildcats with 1,305 rushing touchdowns and fourteen touchdowns.

The Bulldogs and Nick Fitzgerald were up and down this season under first-year coach Joe Moorhead en route to a 8-4 record. Fitzgerald had over a thousand rushing yards but was too inconsistent as a passer and Mississippi State only won half of their conference games.

The Tigers shook off a slow start and won five of their last six games to finish 8-4 on the season. Drew Lock, a probable first round pick in the NFL draft, was fantastic and had his third season with over three thousand passing yards.

Auburn started the season ranked in the top ten with high expectations. After an impressive opening win against Washington, the Tigers offense looked incredibly out of sorts just a few weeks later and they fell to LSU, Mississippi State, and Tennessee. Auburn finished the regular season getting blown out by Alabama by a score of 52-21 and Gus Malzahn is definitely on the hot seat.

It was a frustrating season for Derek Mason and the Commodores. Losses against Notre Dame, Florida, Kentucky, and Missouri were all games that Vanderbilt could have won. However, the team overcame all of that to squeeze out an overtime victory against Ole Miss as well as a dominant performance against rival Tennessee to earn a trip to the bowl game for the second time in Mason’s five-year tenure.

The Gamecocks will play a make-up game against Akron this Sunday but currently sit at a 6-5 record with a 4-4 conference record. Jake Bentley finished the season with 2,754 passing yards including a 510-yard and five-score performance against Clemson.

The Rebels 5-7 season, their last one with a postseason ban, ended in the Egg Bowl with a blowout loss and a brawl.  Jordan Ta’amu was spectacular for all season, throwing for 3,918 yards which ranks third in the nation. The Rebel defense, however, was awful all year and finished the season ranked 121st overall in yards per game given up with 483.4.

The Volunteers were unable to make a bowl game in Jeremy Pruitt’s first year after they were dominated by Vanderbilt. The season featured big wins over Auburn and Kentucky but also beatdowns at home against Alabama, Florida, and Missouri. The offense struggled badly all season and finished 121st in the country in yards per game.

Expectations were very low coming into this year for Arkansas under first year coach Chad Morris but the season might have gone even worse than expected. The Razorbacks did not win a single SEC game and also had an embarrassing loss against Colorado State. Former Clemson quarterback Kelly Bryant visited Arkansas during the season, so Razorback fans will hope he chooses to play there to get their program back on track.