Nashville musicians to celebrate ‘The Last Waltz’ on Nov. 10 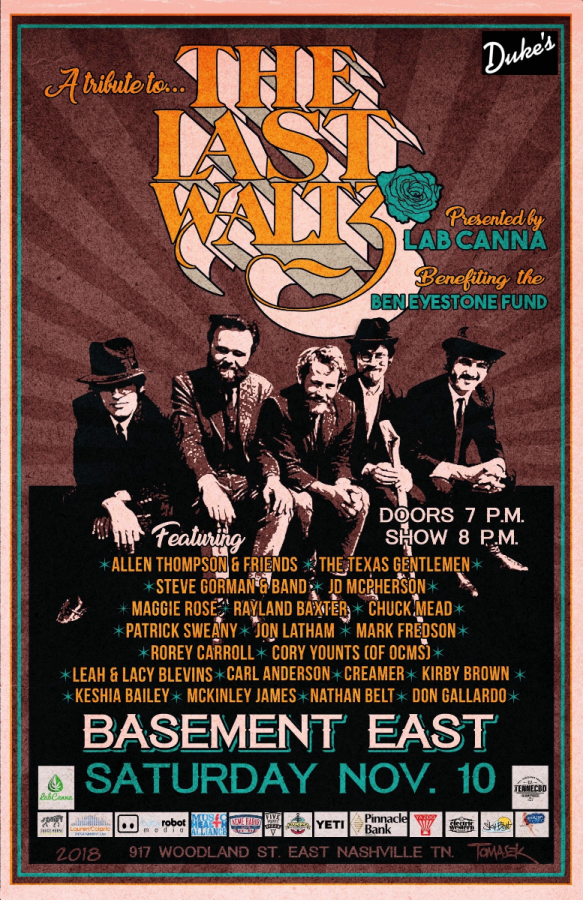 On Nov. 10 at the Basement East, the Nashville music community will be performing The Last Waltz, featuring Steve Gorman of the Black Crowes, Allen Thompson, the Texas Gentlemen and more will come together to perform the music of The Band as a benefit for The Ben Eyestone Fund.

Thanksgiving Day 1976 The Band performed “The Last Waltz,” their final show, at the Winterland Ballroom in San Francisco. Now, 42 years later, an all-star line up of Nashville musicians are gathering for an annual tradition to pay tribute to this moment in music history and Ben Eyestone, a 28-year-old drummer who passed away in July 2017 due to complications of colon cancer.

Ben suffered from a common ailment among musicians: a lack of health insurance. In January 2017, he began experiencing stomach pain. Without insurance, he was unable to receive healthcare, and in July of the same year, he passed of complications of colon cancer. The Nashville music community responded quickly to his death, establishing the fund to help prevent similar situations from occurring.

The fund, founded in partnership with the Music Health Alliance and Saint Thomas Health, assists under-insured musicians in the Nashville area that demonstrate obvious need.

Ben Eyestone was a well known figure in the Nashville music scene working with local artists such as Nikki Lane and Margo Price. Steve Gorman, another local Nashville musician and drummer for The Black Crowes, told us about his experience with Ben.

“He had this look in his eyes that said he was way smarter than he wanted you to think,” said Steve Gorman.

“The musicians revere the music so much that it’s almost spiritual,” said Gorman. “It’s truly a unique experience to have 40 musicians just come together and play a catalog that everyone can respect.” Gorman added, “The Ben Eyestone Fund adds an intent and focus to make it more special, every year has to be better than the last.”

When asked what made this concert immortal, Gorman said “there has never been a generation of musicians since that hasn’t gotten into The Band and said it’s great. It sounds like it could be from any era.”