Measuring Up: Finding the ceiling and floor for Vanderbilt Women’s Basketball 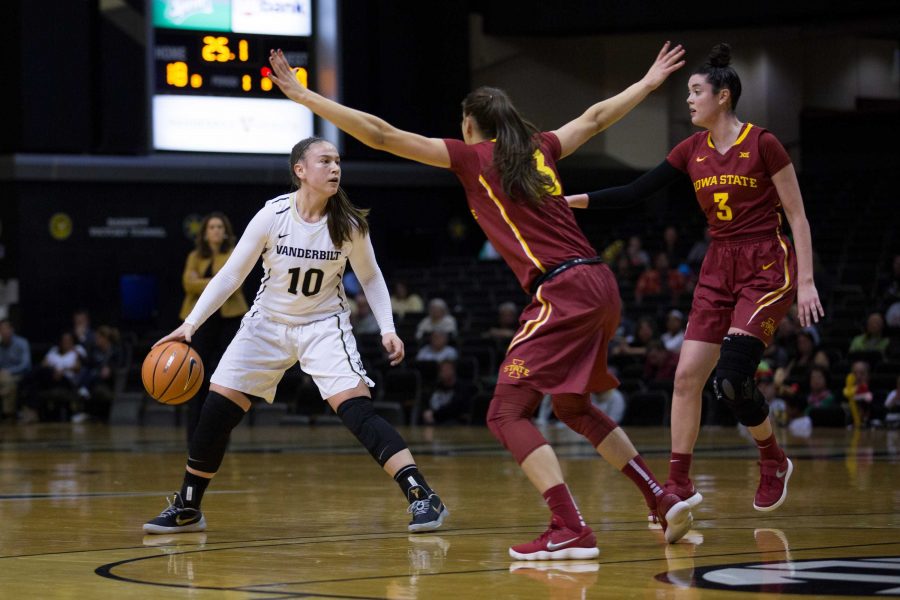 There’s been a lot of change for Vanderbilt Women’s Basketball.

With new coaches and lots of new faces on the floor, our staff broke down expectations for the team.

Here’s what the staff had to say about the team’s ceiling and floor.
Cutler Klein, sports editor
Ceiling: Despite a lot of changeover on the team, there are certainly plenty of talented players on this roster. Guard Chelsie Hall should be a stable presence at the guard position and be a vocal leader on the team. The impact of center Mariella Fasoula will be massive, as the Commodores need a presence on the blocks. Fasoula fits the bill perfectly, as she is an elite center in college basketball, having played for the Greek national team at the 2018 FIBA Women’s World Cup. If the team can get players like Bree Horrocks and Jordyn Cambridge back sooner rather than later, then this team could potentially finish in the top half of the SEC, make a bit of noise in the SEC Tournament and possibly sneak into some form of postseason play.

Floor: The Achilles heel for this team is just depth. There are only 10 players on the roster right now and two of them are hurt to start the season. Many of Vanderbilt’s players will have to play extended minutes throughout this season, which will take a toll. The deeper SEC competition could be able to take advantage of this and rack up points late in games and in the brief breaks for the starters. Without a lot of depth and with some lackluster performances by starters, the team could end up just marginally better than last year’s seven-win campaign.
Max Schneider, associate sports editor
Ceiling: Mariella Fasoula plays out of her mind all season, averaging 20-10 nightly and dominating opposing bigs.  The Greek Freak commands so much attention that she opens up kick outs for open threes, and Cierra Walker continues to drain them like she did last season.  Either Chelsie Hall or Kaleigh Clemons-Green improve to become better shooters, and Hall in particular takes a massive leap coming off a great freshmen campaign.  Vanderbilt is able to overcome the losses of Rachel Bell, Christa Reed, and Kayla Overbeck en route to a near .500 record, a big step up from a seven-win year.

Floor: It seems as if there’s nowhere to go but up after the Commodores finished last season with a single-digit win total, so the worst-case scenario for this team is a repeat of last year.  Fasoula plays well, but opposing teams are able to game plan for her, limiting her impact severely.  Vanderbilt is unable to rely on its extremely narrow bench, leaving Stephanie White’s group vulnerable in the thick of SEC play.  The Commodores get run over by Mississippi State, Kentucky, and the rest of the conference, leaving them in last place by the end of the season.
Betsy Goodfriend, senior writer
Ceiling: Mariella Fasoula averages a double-double and protects the rim on defense. She is a consistent presence in the paint on offense and gives guards an option down low. Guard Chelsie Hall is more vocal on the court and shoots above 35% from three-point range. Freshman forward Brinae Alexander makes the SEC All-Freshman team after averaging 15 points a game. The team only loses to UConn and NC State in non conference play and is around .500 in SEC games. Vanderbilt earns a spot in the Women’s NIT.

Floor: One or two major injuries derail the season. Center Bree Horrocks and guard Jordyn Cambridge will already miss the start of the season, and additional injuries would deplete the small roster. Autumn Newby had foul trouble last year, and fouls out of multiple games this season, straining depth even more. There is at least one game this season with only six players healthy or with fouls to give. Fasoula can’t carry the team through SEC play, where her size is less of an advantage than against mid-major teams. Vanderbilt wins 10 games and misses out on postseason competition.
Simon Gibbs, senior writer
Ceiling: This is a team with a very, very wide range of outcomes.Seven players from last year’s roster have moved on from the Commodores, whether through graduation or transfer. That is a massive overhaul; one that has both potential and uncertainty. But again, we’re talking about the good. Say the additions of Mariella Fasuola, Brinae Alexander, Jordyn Cambridge, and Isabella Paldrmic prove to play to their full potential. Say they can gel together. Say the new hiree, Hall of Fame coach turned director of offensive analytics Mickie DeMoss, can replace the inefficient offense the Commodores had last season. Now, you’re looking at a whole different team; one with a potential to compete for a top four seed in the SEC Tournament. There’s far too much uncertainty to put a number on just how good the Commodores can be, but they can certainly make a sizeable leap from their abysmal performance last season.

Floor: In January of 2018, less than halfway through the season, The Tennessean published an article titled, “What’s wrong with Vanderbilt women’s basketball?” Worst case scenario, they publish a similar article, only this time it’ll be quite clear what’s wrong: the young team is not much of an upgrade from last season and they must start a gradual rebuild through recruiting.
Alyssa Muir, sports reporter
Ceiling: NCAA Tournament Berth

So although Vanderbilt’s women basketball was picked by the media to finish second to last, they have the potential to make a run and sneak into the tournament. Chelsie Hall is one of the better guards in the SEC and Boston College transfer Mariella Fasoula will give the Commodores a much-needed paint presence. They also have two five-star freshmen and have an athletic guard in LeaLea Carter who should be on the floor much more after only playing 16 games last year due to concussion symptoms. This team just might surprise some people this year.

The Commodores gained some key players in Fasoula, Brinae Alexander, and Jordyn Cambridge but they also lost two 1,000 point scorers to graduation and had four other players transfer. It is going to be hard for this team to make up all that scoring especially because they only carry ten players. The team already has injury problems; Cambridge is still recovering from two knee surgeries and center Bree Horrocks missed their exhibition game with blood clots. The lack of depth could really end up hurting Vanderbilt once SEC play rolls around and if that happens it could be another year of uphill battles.
Justin Hershey, sports reporter
Ceiling: 500 Record

Coming off what was a difficult year for the Vanderbilt women’s team, there is room for big improvements from the team.  After sitting out last year as a transfer, Greek center Mariella Fasoula should be a dominant force inside for the commodores and after a fantastic freshman campaign. Chelsie Hall should be in store for another great season as a leader on this team.

If these two can create a dynamic guard and center combo for Vanderbilt, this team has the potential to win a lot of games. With only three freshmen on the roster, the team should also have some experience and know what it takes to face key SEC opponents such as Tennessee and Mississippi State.  Last year, the Commodores suffered some heartbreaking losses against teams like Alabama and Wisconsin. With those tight game experiences, this year’s group should be able to overcome and win some of those games. This year, the ceiling for this group would be a 500 record, splitting their games. The SEC is very difficult but if the ‘dores can accomplish this, the season would be a success.

Last year was difficult and although the team will add Mariella Fasoula, the SEC is still the dominant women’s basketball conference in America and Vandy has some other tough challenges as well.  They have games lined up with UConn, Miami, and NC State, all teams in the Top 25 of the preseason rankings in addition to Mississippi state, Tennessee, and Texas A&M.

Besides Fasoula, the Commodores do not have much height and when matching up with teams like these, the Commodores will struggle in the paint.  This will create tough matchups for Vanderbilt and likely will demand big minutes out of Fasoula. If the team cannot compensate for their lack of size and depth, bigger SEC opponents will come into Memorial and give the Commodores a tough time. If this happens, the record will look similar to last year with little improvement.
Jaime Perez, sports reporter
Ceiling: Possible postseason appearance; top 10 SEC finish

After finishing 12th in the SEC last year, this year’s Commodores are picked to finish 13th. Yet, if everything goes right, they could be a much better than expected.

Though not as lauded or publicized as the men’s team’s recruiting class, the women’s team also has an exceptional one that includes two five-star guards in Jordyn Cambridge and Brinae Alexander. The team also has last year’s top scorer, guard Chelsie Hall, returning for her sophomore year, likely improved after a year with the team and a summer to work on her game.

Despite all these stars, the player who should have fans most excited is Mariella Fasoula. The Greek native will play this year after sitting out last season after transferring from Boston College. Fasoula will be the team’s anchor, best big option and likely its most important player. If the team is able to figure out a lineup that can maximize Hall and Fasoula’s abilities and the star freshmen are able to acclimate to the squad, it can be a dangerous one.

Though the Commodores certainly have potential, the have underperformed the past two years. The team did lose two of its three top scorers to graduation, who, even with talented recruits and transfers, will be very hard to replace. It may also prove difficult for the team to start off on the right foot as Alexander wasn’t even on campus last year, Cambridge is recovering from a knee injury that ended her senior season of high school, and Fasoula hasn’t played an official game in over a year. Just like the men’s team, the women will face a difficult schedule as the SEC is loaded with six teams in the top 25. If conference plays proves too challenging and the newer players never fully gel, it could be another long year for the squad.
Ryan Sheehy, sports reporter
Ceiling: 13-17

Given all the losses sustained over the offseason by the Commodores, the upside is hard to see this season. With Rachel Bell graduating, the team loses a 1,000-point scorer, and she was just one of seven players to depart last season’s team. However, this means that last season’s team that finished 11th in the SEC is mostly gone, making Vanderbilt’s women much like the men’s team in that with so many new players, it is difficult to foresee exactly how this season will play out as we move into the new season.

This is the other realistic side of the “mostly new team” coin. Given that the women’s team does not have the hype of the men’s team, there’s less optimism about their ability to excel with an almost entirely new lineup. Additionally, the women’s team will be somewhat shorthanded with only 10 players lining their roster this season. As the season progresses, this lack of depth will become more and more apparent in the face of injuries and fatigue that will pile up come February and March.