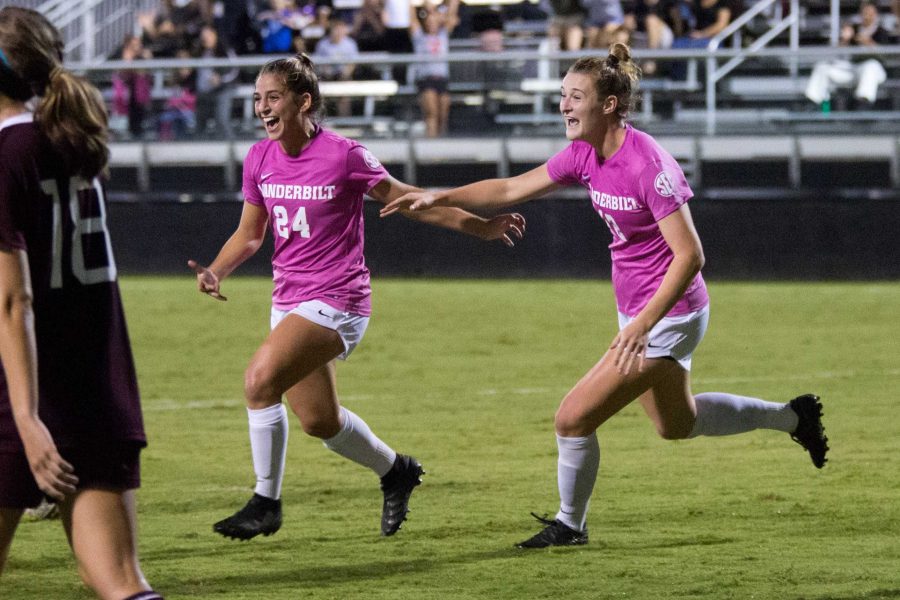 The #19 Vanderbilt Soccer team found a way to squeak past the #25 Mississippi State Bulldogs 1-0 on Thursday night at the Vanderbilt Soccer Complex and set the program record for longest win streak in the process.

Freshman Raegan Kelley played the hero with a late second-half header into the net on a deflected cross from Nia Dorsey to give Vanderbilt its 12th win in a row. The lone goal of the game proved to be the difference-maker, and showed Vanderbilt’s ability to win in all types of ways.

“I haven’t seen a team like this in a long time,” associate head coach Ken Masuhr said. “[Head coach] Darren [Ambrose] has been doing this considerably longer than I have, but when we first got into the program, we were adapting to teams and trying to figure out ways to win games. Now, it seems that teams might be adapting to what we’re trying to do.”

This was a hard-nosed, gritty affair from the start as Mississippi State tried to impose its rough-and-tumble style of play on the game, but Vanderbilt was able to settle down by the end of the relatively uneventful first half and own possession and the shot share. Vanderbilt held an 8-3 edge in shots in the first half and had the only three shots on goal.

In the second half, Vanderbilt got even more comfortable and pressured with possession. The Bulldogs looked dangerous in their brief moments of offense, however, and tried to counter-attack with some pace. A dangerous turnover midway through the second half led to a great Mississippi State shot into the net, but the play was ruled offside.

Vanderbilt owned the chances, but every time they moved the ball into the box, the Bulldog back line stood strong and cleared most chances out before they became dangerous.

“I think everyone just had to settle down and try and look for the right ball,” Kelley said. “It was kind of just playing the ball forward and hope for the best. I think once the first 15 minutes went by, everyone kind of settled down and looked for the right ball, the right play, and I think that really helped.”

Kelley finally found the breakthrough in the 76′ minute. Dorsey swam through defenders on the right wing, attempted a cross that got batted down but found the ball at her feet again. She sent another one in that got deflected off the heel of a Bulldog defender and came right to Kelley, who headed the ball home into the wide-open net.

For Kelley, this one was a long time coming.

“It feels amazing,” she said of the goal. “Especially coming back from a knee injury and just being able to come out here and play for my team, I couldn’t have done it without them. Everyone worked so hard every single day, the whole game. We didn’t have the greatest first half and everyone came out after halftime and just worked as hard as they could. We had so many chances so it really could have been anyone. But, just had to be there are the right time with the right ball.”

According to Masuhr, Kelley was always going to be a special player, and she has proved that both in game action and in training.

“We knew that Raegan was going to be a big time player for us down the road,” he said. “In training, the kid brings it every single time. For us, it’s an easy one. She’s very quick, she gets to loose balls, and in a game like that, it wasn’t about the first ball, it was about trying to get to the second one. In moments of chaos and craziness, you have to have one or two kids that settle us down and she’s one of them.”

Mississippi State desperately tried to find the equalizer, but nothing materialized. With a dangerous free kick looming in the final minutes, Vanderbilt ran a brilliant offside trap, running forward together from the back line as the kick was taken to catch all the Bulldog players offside.

The win was Vanderbilt’s 12th in a row, breaking the record for longest winning streak set back in 2005. In Ambrose’s fourth season as head coach, the team has already started making history.

“Especially coming in my first year, now it’s just going to feel normal to win this many games in a row,” Kelley said. “But, I definitely know how much it means for the older girls, especially going through the program, so it feels really good to do it for them.”

Now, Vanderbilt will travel to the east to take on the ninth-ranked Tennessee Volunteers in the second of three-straight games against ranked SEC opponents. Masuhr knows the team will be ready, just like it was for this one on Thursday.

“Kids come to play in an environment like this,” he said. “And we recruit kids that can handle playing on this type of stage. I’m just really proud of the effort and everything that they bring.”