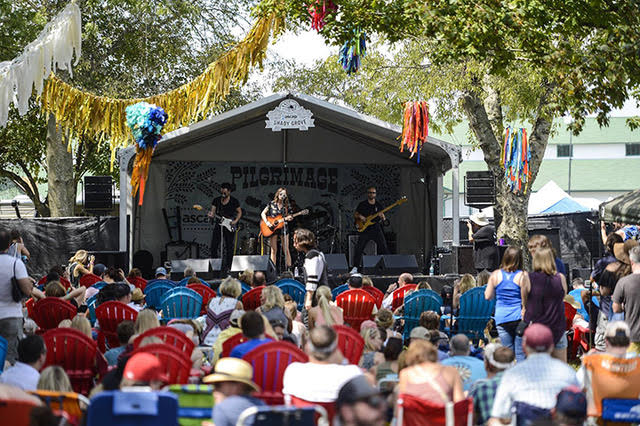 The 2018 Pilgrimage Music and Cultural Festival will take place this weekend, Sept. 22 and 23, from 10 a.m. to 8:30 p.m. at the Park at Harlinsdale Farm in Franklin, TN, about a thirty minute drive from campus. The festival highlights over sixty artists who represent a blend of genres, generally falling under the umbrella of Americana. Here is a schedule of some of the shows you won’t want to miss.

Day One:
Caitlyn Smith
When: 11:10 to 11:50 a.m.
If you’re looking for the perfect artist to kick off the weekend, look no further than singer/songwriter Caitlyn Smith at the Fender Premium Audio Midnight Sun Stage. Smith has co-written country and pop hits, including “Like I’m Gonna Lose You,” which was recorded by Meghan Trainor and John Legend. Check out her 2018 album Starfire to get a feel for Smith’s sound.

Jillian Jacqueline
When: 11:40 a.m. to 12:25 p.m.
Country artist Jillian Jacqueline released album Side A in 2017 and a subsequent EP “Side B” in 2018, with singles “Sad Girls” and “If I Were You” (featuring Keith Urban). Jacqueline was also featured on fellow festival performer Mat Kearney’s latest single, “Kings & Queens.” Due to the scheduling of the festival, you won’t be able to see all of her and Smith’s respective sets, but you should definitely make time to see Jacqueline at the Solo Cup Harpeth River Stage.

Tyminski
When: 12:55 to 1:45 p.m.
Stick around the Solo Cup Harpeth River Stage to hear Grammy Award-winning Tyminski, a bluegrass-country artist with a storied career. Listen to his 2017 album Southern Gothic to hear his dynamic sound.

Wild Rivers
When: 2:10 to 3:00 p.m.
Wild Rivers is a band whose music blends rock, folk and country. Check out their 2018 EP “Eighty-Eight” and single “Howling” before catching them on the ASCAP Shady Grove Stage.

Elle King
When: 5:15 to 6:30 p.m.
Best known for her hit “Ex’s & Oh’s” off her 2015 album, Love Stuff, Elle King plays the Solo Cup Harpeth River Stage and is one of the day’s headliners. She won an award from the Country Music Association for Musical Event of the Year and received a Grammy nomination for “Different for Girls,” a duet with country artist Dierks Bentley. Her newest album, Shake the Spirit, can be pre-ordered now.

Lionel Richie
When: 5:45 to 7:05 p.m.
Headliner Lionel Richie’s show on the Gold Record Road stage overlaps with three other headliners (Hozier, Elle King and Jack White), but any R&B or pop fan should definitely make it for some of the “Hello” and “All Night Long (All Night)” singer’s show. His 2012 album Tuskegee is a collection of collaborations with country artists, such as Willie Nelson and Tim McGraw, on some of his greatest hits.

Jack White
When: 7:00 to 8:30 p.m.
The final show of the night is alternative-rock artist Jack White, performing on the Fender Premium Audio Midnight Sun stage. In addition to being a solo artists, White was the lead singer of the duo The White Stripes and produced Loretta Lynn’s album Van Lear Rose. White’s latest album is his Boarding House Reach, released earlier this year.

Day Two:
Jamie Kent
When: 10:15 to 11:00
Artist Jamie Kent is the first artist of day two to play the ASCAP Shady Grove stage. Check out his 2016 country album, All American Man, which incorporates pop and rock elements from earlier albums.

Liz Longley
When: 11:40 to 12:25 p.m.
Singer/songwriter Liz Longley is the recipient of many prestigious songwriting competitions, including the BMI John Lennon Songwriting Scholarship Competition. Longley has released seven albums since 2007, her latest being Weightless, in 2016. You can find her playing the ASCAP Shady Grove stage.

Lilly Hiatt
When: 3:35 to 4:25 p.m.
Singer/songwriter Lilly Hiatt was nominated for the Americana Music Honors and Awards’ Emerging Artist of the Year Award. Hiatt has released three albums. Her latest album, Trinity Lane, is about her personal fights and growth and the house in East Nashville on Trinity Lane that helped her find her place. Check out Hiatt’s powerful rock-based album and don’t miss her on the ASCAP Shady Grove Stage.

Chris Stapleton
When: 7:00 to 8:30 p.m.
Country artist Chris Stapleton’s fame has skyrocketed since his Country Music Association Awards Show debut in 2015, where he and Justin Timberlake performed “Tennessee Whiskey” and “Drink You Away.” The duo teamed up again at the 2017 Pilgrimage Festival with Stapleton’s wife, Morgane, performing “Tennessee Whiskey,” “Fire Away” and “Sometimes I Cry.” Stapleton’s latest album is From A Room, Volume 2, which is nominated for a CMA Award for 2018 Album of the Year. Stapleton is also nominated for Entertainer of the Year, Male Artist of the Year, and Song and Single of the Year, both for “Broken Halos.” Stapleton is performing on the Fender Premium Audio Midnight Sun Stage.

All photos courtesy the Pilgrimage Music and Cultural Festival website unless otherwise stated.