‘A Greater Society’ aims to inspire a new generation of activists 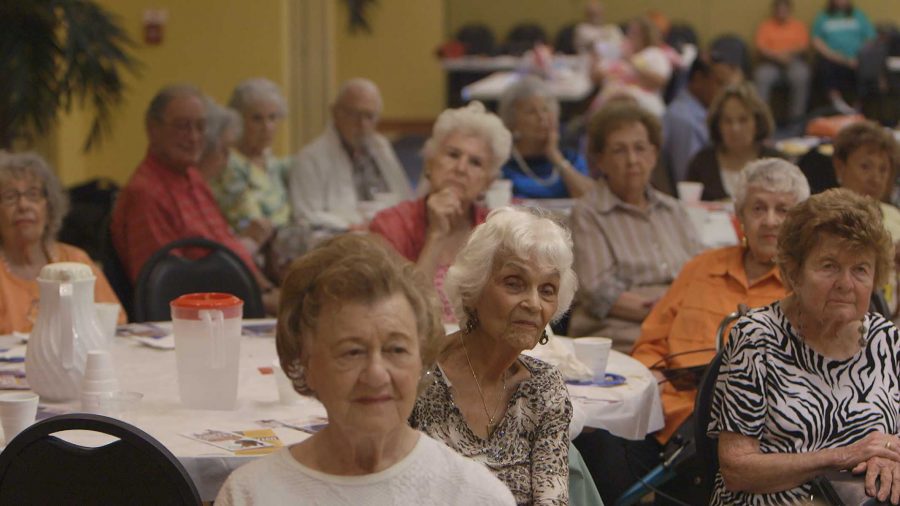 Stacy Goldate (‘94) is no stranger to Wynmoor, a retirement community in South Florida where she regularly visited her grandmother growing up. While she always knew the community was politically active, she never grasped its political significance until 2012, when she heard on a radio broadcast that then Vice President Joe Biden was making a special campaign visit to Wynmoor only two months before the 2012 presidential election. Newly enlightened to the extent of political power held by Wynmoor, co-directors and co-producers Goldate and her husband Craig A. Colton decided to film A Greater Society in order to inspire others to get out and vote. Its depiction of an active retiree community volunteering at phone banks, holding political panels, and supervoting truly inspires the patriot in each viewer while also highlighting the heartwarming relationships among residents. The film’s title references President Lyndon B. Johnson’s Great Society, a set of initiatives including Medicare and Medicaid, designed to alleviate poverty and inequality, for which Wynmoor residents fight to keep in place.

Following and filming a cast of active senior citizens turned out to be quite the challenge, especially given that Goldate and Colton shot the grand majority of the film without assistance. Cast member Jack was up at 5 a.m. for his religious sunrise ritual, while Fred insisted on keeping a West Coast time zone, meaning he was up at 2 a.m. Lonnie, Minerva and Jack, as active now as they were in their youth, were always dashing from meeting to meeting. These busy schedules meant that Goldate and Colton usually woke up at 4:30 in the morning, and didn’t rest  until 2:30 at night. As demanding as the project was, Goldate and Colton kept the film’s vision of encouraging people to vote in sight.

“If a 98-year-old woman can get up to get a walker and get in her car to go out and vote, an 18-year-old should be able to do that,” said Colton. “The problem is that a lot of younger people don’t understand what exactly they are voting for because protecting social security and Medicare don’t really affect them. Older people do; they understand the battles they had to fight to get these programs through. These people are doing everything they can to protect these programs for us, for our generation.”

After four months of filming, A Greater Society went into post-production, which typically takes three to five years, for four years before it was finally completed. The film premiered at the 2018 Florida Film Festival in Orlando, which the stars of the film and Wynmoor leaders attended.

“All of them loved it,” Goldate said. “They cried, came up and hugged us. Fred hugged me so hard I couldn’t breath. Jack and his wife, Miriam, loved it and laugh everytime they see it. The response from the people who mean most to us was fantastic.”

While most films follow a traditional route from the film festival circuit to a distributor, then releasing on-demand, the unique timing of A Greater Society mandated an unconventional approach. The film was completed right before the upcoming 2018 midterm elections, presenting an opportunity to use the film as a platform to encourage people to vote. Thus, Goldate and Craig reached out to various nonprofit organizations that could use the fim as a voter engagement tool.  A Greater Society will also be screened at Vanderbilt University at the same time as a live stream screening on Constitution Day. Goldate stresses that the film is especially significant to Vanderbilt students.

“One of the reasons I’m so excited to come to Vanderbilt is that the country is going to be looking at Tennessee’s Senate race,” said Goldate. “Tennessee is such an important Senate race because it is a red, red state and a lot of times, when people live in a state that’s really red or really blue, lots of people don’t think it’s as important to vote because the majority is going to win no matter what. But in Tennessee this year, for the first time in 10 years, that Senate race could swing blue.”

The Vanderbilt screening of A Greater Society, which is free and open to the public, will occur in the Commons Multiple Purpose Room 235 on Monday, Sept. 17 from 5 to 7:30 p.m.