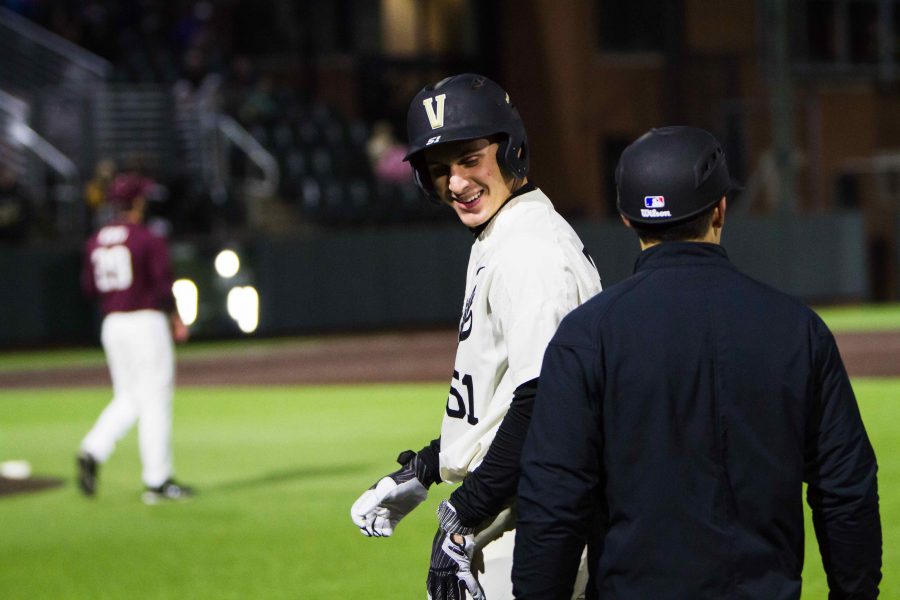 As a sluggish night at the plate for the Vanderbilt Commodores turned into a late 3-1 deficit against the Mississippi State Bulldogs, a colleague in the press box said “This just doesn’t feel like Vanderbilt’s night.”

A few innings later, JJ Bleday made it Vanderbilt’s night with a walk-off home run to straightaway center to send the Nashville Super Regional to a Game Three.

So, how does a team that left 10 runners on base and had their starter give up six hits and three earned runs in four innings come out with a 4-3 walk-off win?

For that answer, we must turn to none other than Nashville Predators head coach Peter Laviolette.

They saw Mississippi State walk off on Friday night in their own ballpark.

Yet, here they are. They’re still alive.

“I think it’s the fibers of the kids,” head coach Tim Corbin said. “I think it is. You see it on their side, you see it on our side. You’ve got a lot of tough kids that are playing. When it’s playoff baseball, no one wants to give in. Third out’s tough to get. It really is. It was tough for us to get last night and it was tough for them tonight. That’s what happens when you get two tough teams that play one another and have really been beaten up during the year.”

Tough players find ways to win. Vanderbilt’s players have been able to do that all season long. In mid-April, Ole Miss looked poised to score late in a game when Austin Martin executed a hidden ball trick to score an out from thin air. Vanderbilt went on to secure a huge series win.

Cornelius would be proud. #Hustlin' pic.twitter.com/snByVV7KEU

In the second game of the Clemson Regional, Vanderbilt found themselves down 3-0 after two innings. It took Ethan Paul being hit by a pitch but controversially not being granted a base, then hitting a two-run home run moments later to get the Commodores back in that game. A Connor Kaiser RBI single a few innings later helped to secure the win.

As with everything at this school, people find a way to get it done. It’s been that way since 1873.

“We’re a tough team,” Bleday said. “It’s not over till that last out. We figured that out early on and we’ve had some ups and downs, but we’ve been able to be tough enough to stick it out.”

It was determination and toughness, plus a little of that Vanderbilt intelligence, that allowed Bleday to have the chance to become a hero. In the eighth inning, Harrison Ray, who had struck out twice in the game to that point, roped a ball into the gap in left field. For most other players, that’s just a double.

Not for him. Not for a Commodore. Ray turned it into a triple, allowing Paul to bring him home on a single in the ensuing at-bat.

“Out of the box, I was thinking two,” Ray said. “But once I got to first and I saw where Mangum was, I was ‘I’m getting to third.'”

Nothing comes easily at Vanderbilt. That’s the case from Founder’s Walk to graduation. There’s no easy road to even get admitted to the school. When you take the hard road that many times, you get some scars.

Perhaps Vanderbilt pulled it out because it wears its scars on its chest rather than its heart on its sleeve.

Game Three is Sunday night at 5 PM CT and will be televised on ESPN2.