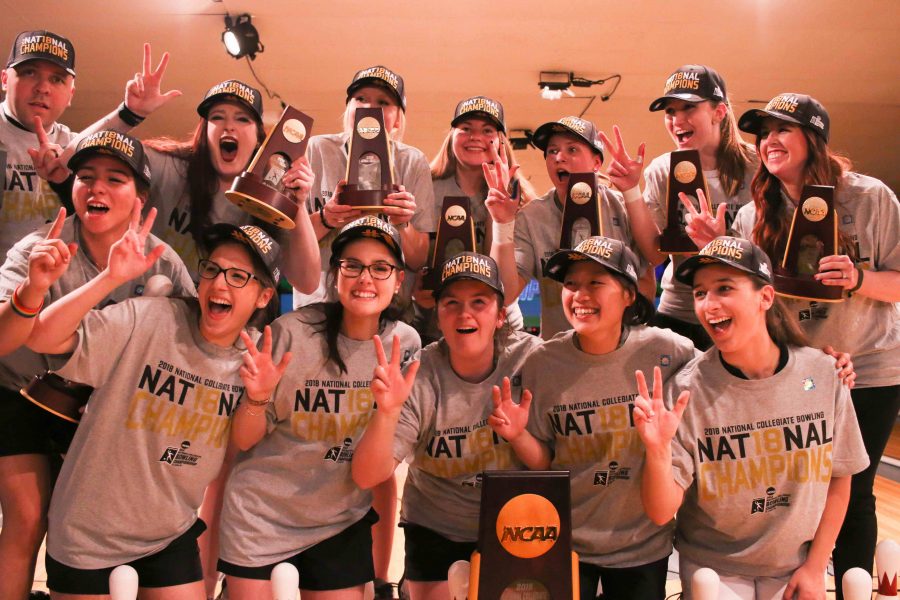 When John Williamson helped found the Vanderbilt Bowling team in 2004, a moment like Saturday’s NCAA Championship match was something that only existed in his head.

He was an assistant on Vanderbilt baseball coach Tim Corbin’s staff before he was tapped to run the startup program. Within three years, he had already made school history by winning the first-ever NCAA title for Vanderbilt in 2007.

It took 11 long years of near-misses and heartbreak, but Williamson and his team reached the pinnacle again when they won the second NCAA title in program history and fourth title in school history on Saturday in a thrilling seven-game victory over McKendree.

“Being a young program that hadn’t done anything, I didn’t necessarily think that we would be the first,” Williamson said after throwing out the first pitch at Vanderbilt Baseball’s game on Sunday afternoon. “But, we sort of struck gold in 2007 and at that time, I thought that they were easy to win because it was only our third year. It turned out that it wasn’t that easy. We’ve had some chances to win it, but it took 11 to get the second one. I’m hoping it won’t take 11 to get the third.”

This year’s championship team took after the first one in many regards, primarily in its team chemistry. According to Williamson, fielding a team as tightly-knit as this year’s squad was hard to find. The 2017-18 bowlers did not have the expectations that past teams have had, but they had the bond of champions that Williamson had only previously seen in his 2007 champions.

“We haven’t had the best season during the regular season, but I think this is probably the most fun I’ve had as an entire group,” said junior Kristin Quah. “We all just really got along as a team and I think that really helped.”

An elite-level bond wasn’t the only stereotypically Vanderbilt thing about this squad. Their road to the trophy was typical of a Commodore team in its convoluted nature. After cruising through the first two rounds of the tournament, Vanderbilt had to face Sam Houston State for the second time. In the double elimination format, the Bearkats won their Friday night match to force a decisive match on Saturday morning for a shot at the title.

With their backs against the wall, the Commodores never stopped fighting and won both the traditional match to force a decisive “Baker match” game to advance to the championship game later that day. It was the adversity of the moment that brought the Commodores together.

“I think, after the morning match, we had such a great match against Sam Houston in the Baker game that it actually helped our evening match,” Quah said. “We played fantastic, probably the best we played all season in that five-game Baker match against Sam Houston. It helped us settle down in a way. It could have been a blessing in disguise that we had to play that morning. I haven’t felt that great as a team all year.”

Of course, the road wouldn’t get easier in the traditional best-of-seven final. Vanderbilt found themselves down 3-2, but managed to claw their way back and force a seventh game thanks to a massive 10th frame from Maria Bulanova. Game seven was all Commodores, as they took the final game 220-191 to clinch the championship.

It was typical Vanderbilt: making it as hard as possible, but still pulling through as a cohesive, hard-nosed team.

“It’s kind of funny because we were joking about it that ‘Oh yeah, we’re Vanderbilt, of course we’re going to take it to seven,’” Quah said. “We seem to always do that. We’re always going to extend it as far as possible before we actually do something. I think it’s just a testament to how we will always push back. People can show their fight but we’re always going to try and give more.”

The road to the top was typical of a Vanderbilt team, and so was the team’s attitude. Commodore teams can never rest on their laurels. It always comes down to a mentality, and that’s exactly what the Commodores had: a winning attitude.

It’s the same attitude that has made Vanderbilt Bowling a premier program in the country.

“I give them all the credit in the world because the girls found something in themselves that just allowed them to believe,” Williamson said. “We have some messages and themes and things like that that we try to instill and give them sort of a roadmap on how we think to get to where we wanted to go, but when it’s all said and done, they’re driving the car. I’m so happy for them because they’ve put in a lot of work. They’ve sacrificed a lot and now they can reap some of the rewards.”

Now, Vanderbilt looks to the future with hope and confidence. Winning is only fun if you do it a lot, and Williamson thinks this title can have long-lasting effects.

“Every opportunity for our program to bowl for a national title helps our team three, four, five, six, even 10 years later because the little girls that are watching it that are bowling see Vanderbilt on TV,” Williamson said. “That just helps us continue to stay sort of in the forefront in the conscious of the youth bowling world and that’s where we want to be.”