Which Vandy Baseball player has the best walk-up song? 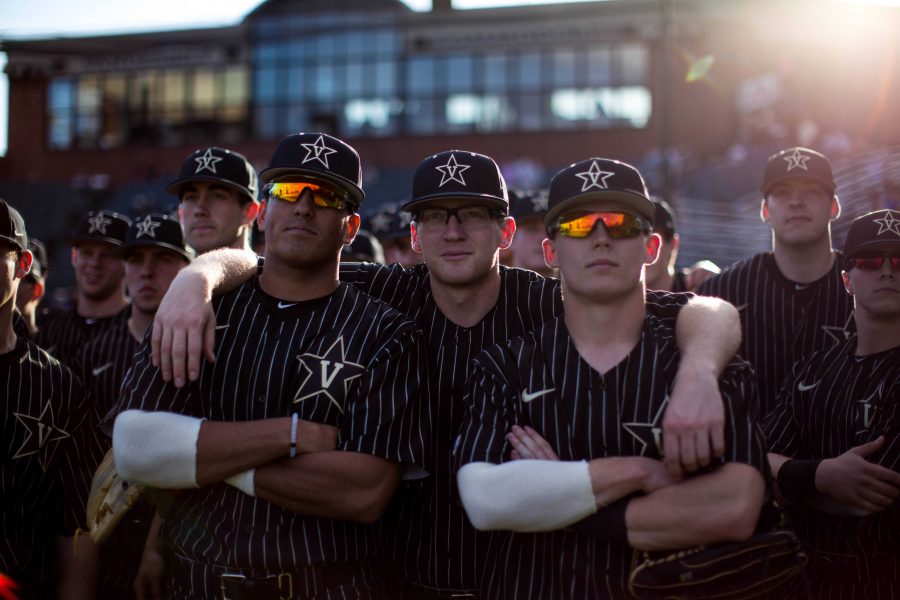 If you’ve been to a Vanderbilt game at Hawkins Field this year, you know that the Vandy Boys have a wide range of entrance music. Not only do the Commodores look poised for a great season on the baseball field, but they also keep the fans entertained with their brief clips of music that play across the stadium as they approach either the mound or the plate.

We attempted to rank the top nine walk-up songs for the 2018 Vanderbilt baseball roster. Our selections are based on the catchiness of the song and unique fit to the player.
1. Alonzo Jones Jr. (“Mr. Jones” by Mike Jones)
When this junior outfielder steps into the box, everybody in the crowd knows just who it is. Sporting a walk-up song with his own name in it, Jones defines the perfect use of a walk-up song. Not only does this song mention his own name, but it also partly describes one of the most unique facets of his game: stealing bases. Leading the team with a perfect seven stolen bases on as many attempts (as of March 9), you truly can’t catch Mr. Jones.
2. Ethan Paul (“Bigger Than Me” by Big Sean)
A key lyric in Paul’s walk-up song is “All I wanna do is make this city proud, yeah” and that is exactly what the junior infielder is doing in Nashville. Paul absolutely killed it early in the season, highlighted by a grand slam and seven RBIs in the Commodores’ rout of UMass-Lowell on February 24.
3. Philip Clarke (“Slow” by Matoma feat. Noah Cyrus)
When we hear this song, we can not help but get out of our seats and unleash a loud cry of support for Clarke. While this might not be your traditional, run-through-a-wall song, it definitely lifts everybody’s morale who is within ears’ reach. This song does a great job of uplifting vibes, and it obviously has worked so far for Clarke who is already hitting an impressive .273 with a .431 on-base percentage.
4. Julian Infante (“Miami” by Will Smith)
There isn’t much better than strutting up to the plate repping your hometown, and Infante does just that. Standing at 6’3”, this stud does an incredible job of being an intimidating factor in the batter’s box, all while playing it calm, cool, and collected. Infante’s choice of “Miami” by Will Smith allows him to put on his hometown flare for the Commodores here in Nashville. You better expect big things out of this Miami-bred future star.
5. Pat DeMarco (“Untouchable” by Pusha T)
DeMarco’s walk-up song is quite fitting as he has been simply “untouchable” in his freshman season. The New York City native was actually drafted by the Yankees in the 24th round of last year’s MLB draft, choosing to attend Vanderbilt instead. DeMarco started the year on a historic note, as his 12 hits and seven runs scored are the most by a freshman in the first five games of Vanderbilt’s past 10 seasons.
6. JJ Bleday (“Chain of Fools” by Aretha Franklin)
To the keen observer, JJ Bleday’s name is all over Hawkins Field. From his self-proclaimed “Bleday’s Bleachers” fan club out in right field, to the chant that fans yell when he gets to the plate, Bleday certainly has a large presence in the stadium. His walk-up song is in theme as the Queen of Soul seems to repeatedly yell “JJ” as he steps up to bat.
7. Drake Fellows (“God’s Plan” by Drake)
Is that…? No, couldn’t be… Sophomore pitcher Drake Fellows often gets confused with the Toronto based rapper, Drake, as he walks up to the mound. We like this entrance song because of the effectiveness of the namesake and because the pitcher does live out “God’s Plan” by striking out so many batters for the Commodores.
8. Jayson Gonzalez (“California Love” by Tupac)
Similar to Infante, this corner infielder has a certain swagger that allows his classic walk-up song to resonate in the ears of the crowd. Not only is California Love a truly classic song, but it perfectly fits Gonzalez’s silent killer mentality. Being one of the Commodores’ most touted recruits, Gonzalez is living up to the hype. Already sporting a .333 average along side a .537 slugging percentage, it looks like Gonzalez may be getting a little help from fellow California legend Tupac himself.
9. Connor Kaiser (“Butterfly Effect” by Travis Scott)
All rap lovers can appreciate this song. Travis Scott certainly belongs at almost any sporting event and we are glad that big-swinging junior Kaiser brought him to the Hawk. Maybe Travis Scott, his new baby, or his “Butterfly Effect” are the good luck charms behind Kaiser’s great form.
Honorable Mention: Walker Grisanti (“Imagine That” by Kevin Gates)
Kevin Gates always deserves some recognition. Bold prediction: Commodores go to Omaha and win the College World Series, imagine that.

It would be unfair to critique the walk-up songs of these players if we did not put our own music tastes up for scrutiny. If Davison played baseball, his walk-up song would be opening of “Hurricane” by Bob Dylan, and if William played college baseball, he’d have to go with the chorus of “Kings of Summer” by ayokay and Quinn XCII.

What would your walk-up song be?