CMA EDU Vanderbilt’s event “An Inside Look: Making It in Music Business” 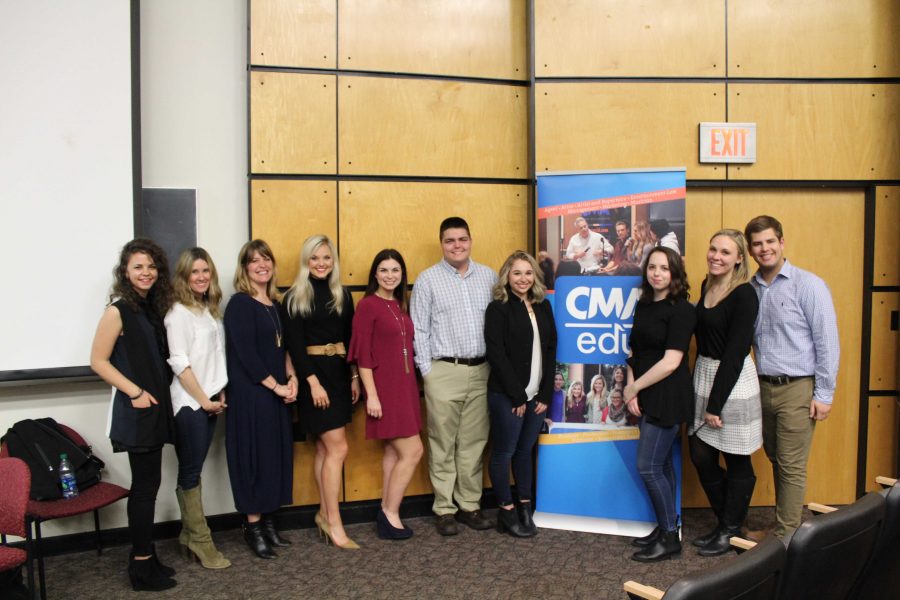 At CMA EDU Vanderbilt’s event “An Inside Look: Making It in Music Business,” some of Music Row’s most accomplished women came together to share their career paths and give students advice that would serve them well in any setting, but especially in the music industry.

CMA EDU’s goal is to connect students to industry insiders through networking events and others on campus who share their love of music. In terms of trying to launch a career in such a creative and competitive business, CMA EDU Vanderbilt President Michael Nelson acknowledges that students could not be in a better city to launch their careers.

“It’s just incredible to be here in Nashville and have all these resources right here at our fingertips,” Nelson said. “Nashville is really the epicenter of all these things going down in the music industry.”

Aiming to offer a diverse perspective into different aspects of the music business, the panelists included Cris Lacy, SVP and A&R at Warner Music in Nashville; Becky Gardenhire, Partner and Agent at the William Morris Endeavor; Brittany Schaffer, Head of Artist and Label Services at Spotify; Jennifer Turnbow, Senior Director of Operations and Co-Director of Tin Pan South, and a member of Nashville Songwriters Association International; and Shelby Yoder, who works with both Milk & Honey and My World Management and Third & Verse Music Publishing.

In case you missed the event, here are the best pieces of advice the panelists wish they knew when they were finding their professional footing.

“Have a point of view. Make it known. Nothing is worse than sitting in a meeting with someone who doesn’t have an opinion or doesn’t have any kind of perspective. So say whatever it is, even if it’s wrong. Bad ideas are still valuable because they push you to find the right ideas.,”Cris Lacy said.
“Go with what you want, and ask for it. Communicate well,” Shelby Yoder said.
When it comes to applying for jobs or changing disciplines, Yoder recognizes that she found exactly what she has always wanted to do within her current jobs, which allows her to work with singer songwriters on the creative side. When people ask how she landed her job, her response is simple: “I asked for it.”
“Sit at the table. Jump in. Figure out where you can help, and figure out where you’re valued, which sometimes may be just taking out the garbage. But if you take it out every day, someone’s like ‘Wow, that garbage is always out.’ They’re going to notice, and they’re going to be like she should be handling more than garbage,” Becky Gardenhire said.
“Feel and act like you deserve to sit at the table because you were sitting at that table with them,” Shelby Yoder said.
“Argue like you’re right, listen like you’re wrong,” Brittany Schaffer said.
“Have strong opinions loosely held,” Cris Lacy said.
Essentially, put in the work. When she was new to the business, Jennifer Turnbow was determined to hit the books, learn more than anyone else in the company and prove herself.
“I was going to be the first to raise my hand whenever someone comes up to be done, and just kind of dig it out,” Turnbow said. “Never be too good to take out the garbage or sit in the boardroom to give a presentation.”