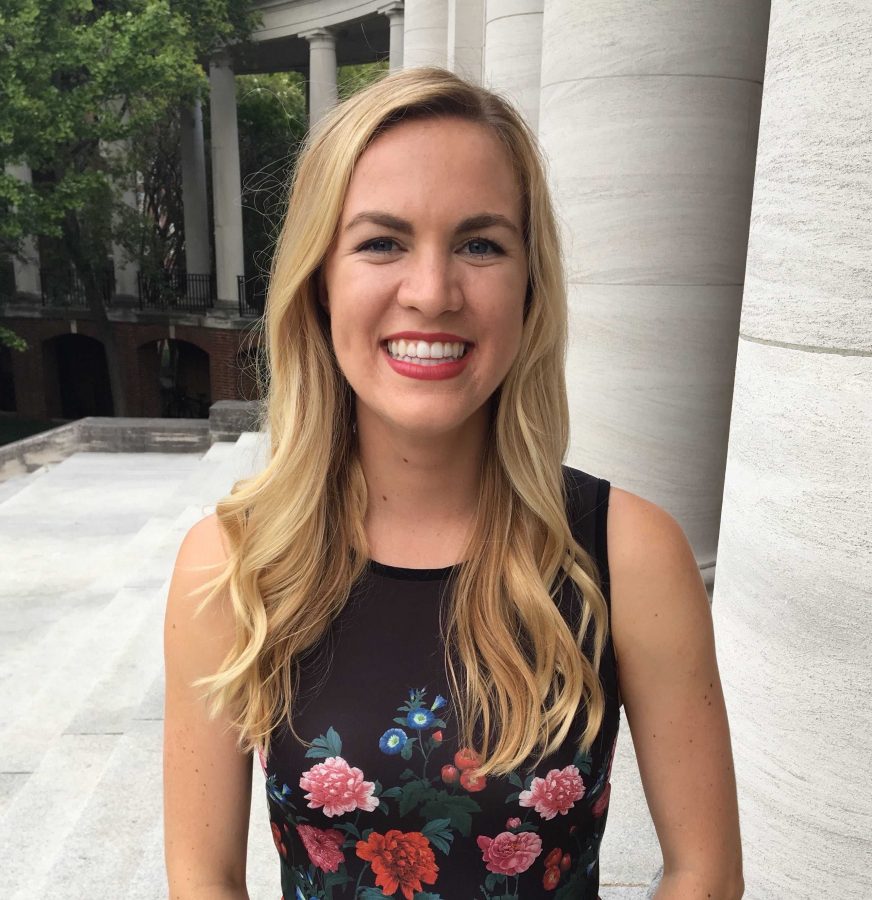 Calculated risk-taking has played a significant role in senior Alexis Cook’s postgraduate plans. Coming into Vanderbilt, Cook sought to pursue a career in poverty alleviation, a passion she had discovered while interning at five different nonprofits in five different countries during her gap year before college. Eventually, Cook began looking into different microfinance organizations in India that she hoped to work with after graduating with a degree in HOD and Economics.

Junior year, however, brought unexpected opportunities. Due to lyme disease, Cook took fall semester off and suddenly found herself with a lot of free time on her hands.

“I wasn’t here in the pressure cooker that is Vanderbilt,” she said.  “While all my friends were applying for internships and jobs, I was getting IV treatments, so that shifted my focus to doing something I really cared about and had the time and opportunity to do, which was hanging out with homeless people.”

She began walking around her hometown of Nashville and starting up conversations with homeless people. Having worked with the homeless population before, she finally had the chance to dive deeper into the problems they faced. Among the many complex issues contributing to poverty, the lack of a sustainable job stood out to Cook as a common factor.

“I kept thinking, ‘What if I could create a company that would specifically hire these people?’” Cook said. “I was just mulling that idea over and didn’t really know what the company would look like, but I really felt called to it.”

Once again, an unexpected turn of events would lead Cook in the right direction. Because she still resided in Nashville during her leave of absence, she was able to visit friends at Vanderbilt from time to time. On one such visit, she found herself locked out of her car, waiting on the curb for her mom to bring spare keys when Corbin Hooker, an acquaintance from freshman year, walked by and struck up a conversation.

“We started talking about what I was doing, why I was out of school,” Cook said. “I told him, ‘I really want to start a business to employ people who are transitioning out of homelessness.’ He replied, ‘You know what; I’ve been thinking a lot about that, too!’ And we just sat there, talking up business plans on the curb for 30 minutes.”

The curb conversation evolved into a plan of action as she and Hooker continued meeting once a week for the rest of the fall semester of her junior year. Cook’s health improved enough to allow her to return to school in the spring, during which she and Hooker entered and won a pitch contest on campus. Although they received some seed money as a result, they still needed more money to become an official LLC. Fortunately, they were able to receive funding from an unlikely source.

Ray, a Cuban immigrant who lived in Mercury Courts, a transitional center for the homeless where Cook volunteered, had become her unofficial grandfather over the course of their friendship. When he was diagnosed with cancer, Cook took over as his unofficial legal advisor. One day, he called her to tell her he was dying, and Cook immediately rushed to his side.

“We just talk about his life, what it meant to him, and all these beautiful things,” she said. “But near the end of the conversation, he called me in and said, ‘Alexis, I haven’t told you this before, but I have a storage unit, and in this storage unit I have duffel bags of money, and whenever I pass, I want you to have it all.”
It’s a weird, surreal experience because I’m just a student and I’m sitting here in class, but every now and then, I write checks for people
Although too devastated at the loss of her friend to immediately process the implications of this unlikely inheritance, 2 months later, Cook, Hooker and Ray’s friend, Chuck headed to the storage unit. True to his word, Ray had kept a duffel bag stuffed with just over $2,000 in cash. The generous donation of a homeless man thus allowed Cook and Hooker to file to become an LLC., purchase equipment, and hire their first employee, Libby.

Their business, Unlocked, is a for-profit venture that employs people transitioning out of homelessness to make and sell jewelry. They anticipate hiring additional employees in the following weeks and have been developing their company website.

“It’s wild,” Cook said. “Sometimes it’s a weird, surreal experience because I’m just a student and I’m sitting here in class, but every now and then, I write checks for people, and I’m just honored in a weird way that this is really happening.”

As her business began to take shape, Cook was still pondering her career plans upon graduation. She seriously considered working for a microfinance company in India, but the possibility of continuing with Unlocked stayed in the back of her mind, as she worried that the company would likely fizzle out if she left. Her faith served as a great source of assurance during the decision making process.

A literal answer to her prayers came in the form of a generous offer from Trevecca University. Unlocked was seeking a designated workspace, and after a meeting with a man at Trevecca University, they received an offer for completely free rent space were they could work full time, in addition to connections with the Trevecca alumni association.

“I just took it as a sign of, I’m just going to risk it and see if I can be self-employed right out of college,” Alexis said. “So that’s what Corbin and I are doing. We are both going to live in Nashville next year and try and make it work.”

While a lot of work remains to be done with the business, Cook said no longer having to balance being a full time student with being a business owner will serve as a great relief.

“As a student, you’re kind of taught this is your life, this is what’s important your exam grades but at the same time, I’m torn because there’s real world problems going on right now and these business meetings are more important because they affect not only my life but my employees’ lives,” Cook said. “That’s been interesting to balance, but I’m glad it’s coming to an end soon.”

In light of her unconventional career path, Cook encourages other Vanderbilt students to be willing to look beyond a conventionally prescribed path for success.

“Be willing to pursue your passions in a way that will improve the lives of others,” she said. “Had I not hung out with homeless people a lot, this would have never happened. I think there is already a lot of potential in Vandy students for this kind of work, but there would be even more if we were willing to really explore our passions.”