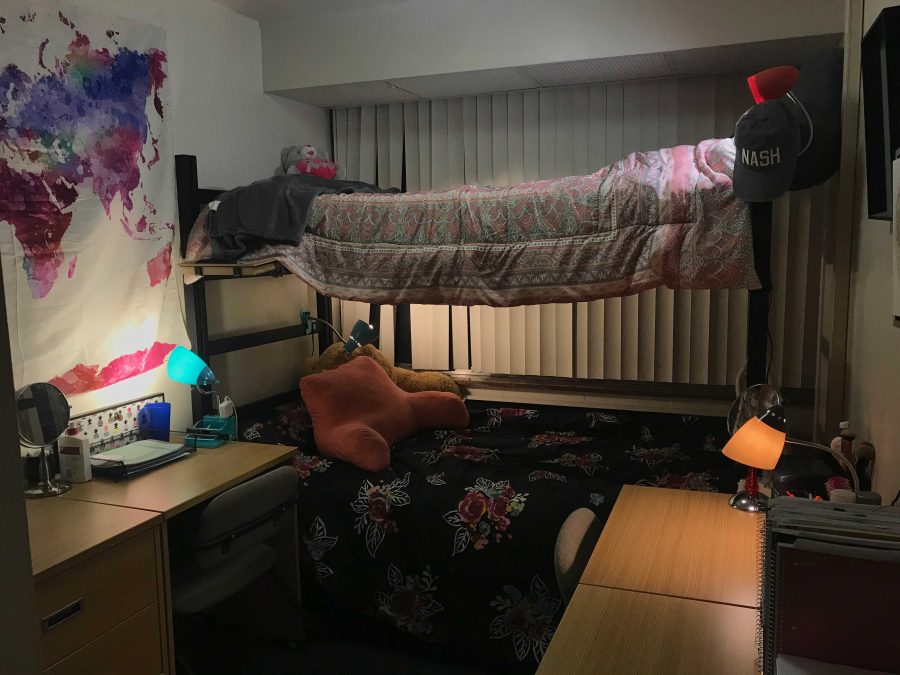 Morgan and Lewis single bedrooms were converted into doubles when construction increased the need for beds. photo by Eva Durchholz

Lewis and Morgan Houses opened in 1962 offering two-person and three-person suites. When Vanderbilt and Barnard Halls were demolished in May of 2016, Vanderbilt’s housing capacity was reduced by 240 beds. In response, Vanderbilt put an extra set of furniture into the single within the two-bedroom Morgan and Lewis suites for the 2016-2017 school year, effectively converting rooms that functioned as singles for over 40 years into rooms for two students.

Although E. Bronson Ingram will add roughly 340 beds this fall, Morgan and Lewis suites will continue to be a four-person housing option for the 2018-2019 school year.

“Our plan is to be able to offer [housing to] essentially the same number of students that we’re offering [housing to] right now and that we are having live in Vanderbilt-controlled properties” Provost Susan Wente said.
We feel that the residential college and the residential living experience is a key part of our overall academic experience
Given that there are 120 four-person suites total in Morgan and Lewis, converting these suites back into a triple occupancy housing option would still leave Vanderbilt with an estimated 220 more beds than last year, based on information from housing floor plans.

Wente said that Vanderbilt is not satisfied with the current number of beds on campus and wishes to increase the number of Vanderbilt-controlled beds.

“We feel that the residential college and the residential living experience is a key part of our overall academic experience,” Wente said. “We don’t want to be a place that says we can only give you housing for the first two years.”

The converted double bedroom in Morgan and Lewis suites measures approximately seven feet and ten inches wide by nine feet and one inch long. In addition to this space is a closet that measures 24.5 inches deep by 56 inches wide and a small hallway space just large enough to allow the door to open into the room.

“There isn’t even enough free floor space for two people to stand [in my room],” Vanderbilt junior Spencer Lea, who lives in a converted single, said.

Suites with a converted double bedrooms also contain another double bedroom, a bathroom, a walk-in closet, a kitchen area and a living room.

“The room is definitely cramped,” said Swapnil Pande, a sophomore who lives in a converted single room in Morgan. “However, I don’t mind it too much because I barely spend any time in the room.”

A small room isn’t an issue for students like Pande, who says he mostly uses his room for sleeping.

“I love having a kitchen and living room. [The suite] is a great place to relax and unwind with friends,” Pande said.

Other students aren’t as satisfied with the arrangement, however. Nancy Liu, a Vanderbilt sophomore who lives in the room pictured, said the room is unfit for two people to live in.

“There is no feasible way the furniture allotted for two students– 2 sets of drawers, a set of beds, and a set of desks– can all fit into this room,” Liu said.

Liu and her roommate keep their two sets of drawers elsewhere in the suite. Liu’s roommate, Sanjana Satish, who is also a sophomore, said that they have friends living in an identical room who solve the problem of limited space by having one of the roommates sleep on the couch in their common room.

Students have had mixed responses to Vanderbilt’s housing decisions, which include the debated decision not to increase the amount of off campus housing available to students.

“I understand Vandy’s commitment to having all students live on campus, but when the total number of dorms is reduced, the answer isn’t to shove people into singles and deny extra off-campus housing,” Lea said.

Similarly, Liu said that she thought Vanderbilt should have increased the number of students allowed to live off campus instead of turning the Morgan and Lewis suites into four-person suites.

“If Vanderbilt administration truly cared about students’ satisfaction with living arrangements, they would not have forced two students into a single of this dimension,” Liu said.

However, Pande supported the university’s decision to temporarily convert the three-person suites into four-person suites.

“I think making Morgan/Lewis [two-occupancy suites into] four-occupancy suites serves as a great stopgap,” Pande said. “However, since E. Bronson Ingram construction is finished, I think housing should change [the rooms] back to the intended occupancy.”

Vanderbilt Student Government passed a bill to return the Morgan and Lewis 4-person suites back into 3-person suites, and Vanderbilt students started a petition with more than 1,400 signatures requesting that administration allow more students to live off-campus, citing financial concerns.

Regardless of future plans, Morgan and Lewis rooms built to be singles will continue to house two students for the 2018-2019 school year.