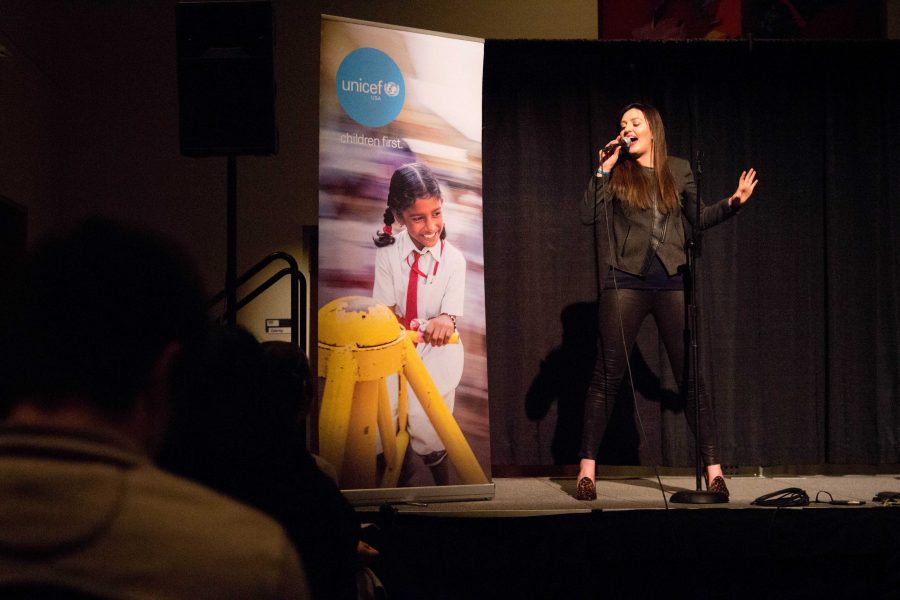 Vanderbilt UNICEF End Trafficking Week featured a performance by Megan Wilde on Friday, February 3, 2018 at the SLC. She shared a sneak peek to a new song she will be releasing that addresses the issue of human trafficking. (Photo by Emily Goncalves)

On Saturday, Feb. 3, Megan Wilde performed on campus for UNICEF’s week of programming. Wilde is a singer, songwriter and activist for human rights.

Vanderbilt Hustler: How did you come to work with UNICEF?
Megan Wilde: I became involved in anti sex trafficking initiatives close to a year ago.  I have been working with various organizations in Nashville, New York and Chicago and an associate forwarded the song I wrote, “Promise,” to a local Nashville representative for UNICEF.  We met up and bonded immediately. I’m passionate about using my gift of music to help women and children who are left without voices.

VH: What has your experience with UNICEF been like?
MW: Working with UNICEF so far has been great. I think everyone’s a bit surprised about how passionate I am for being a rock musician.  I’ve had to learn how to create PowerPoint presentations and deliver speeches, which has forced me to grow considerably. The music industry demands very different skill sets, qualifications and working environments. In my experience, humanitarian work (so far) has less sequins and smoke machines. UNICEF and other anti-trafficking organizations have allowed me to grow with them, which I believe is imperative for fostering a real community.

VH: Can you tell me about the song you wrote for anti-sex trafficking initiatives?
MW: Writing a song to bring awareness to child sex trafficking was by far the most difficult thing I’ve ever been asked to do. We’re in the music capital of the world, and when I told some songwriter colleagues who are currently charting what I was doing, they said it was impossible to write a song about child rape. When someone tells me something is impossible, I can’t help but view it as a dare. I had to get people talking about it openly first so I could gauge what the general consensus was.  Like most people working on anti-sex trafficking initiatives, I went through a period where I lost my faith in humanity.  The general public is so disconnected from the victims, and that’s why there is only a 1% rescue rate for child sex trafficking victims. I decided to write it from the viewpoint of an orphan girl named Annie. I told her story while focusing on innocence and sweetness, so it is palatable. The song I wrote I entitled “Promise” and it asks the community to promise to never look away from a child who is suffering.

VH: How did you come to write about this subject?
MW: Promise (Anne’s House) is the name of an anti-sex trafficking organization in Chicago. They reached out to me a year ago saying they had prayed for 10 years to have a song about child sex trafficking written, and I had prayed the night before asking God to use me to help heal the world in any way I could.  It was meant to be.

VH: What are you hoping to convey to Vanderbilt students in your upcoming performance on campus?
MW: You don’t have to be quiet about the things you care about, especially if it involves the welfare of children.  Be fearless and rock on.

VH: Where do you hope to see yourself in the next few years?
MW: I am releasing my debut album, “Taming The Wilde” in the next couple months – and it’s already leading me to places I never imagined like India, Bangladesh and Dubai. I just hope wherever I am in the next few years, I’ll be having an adventure and making music.