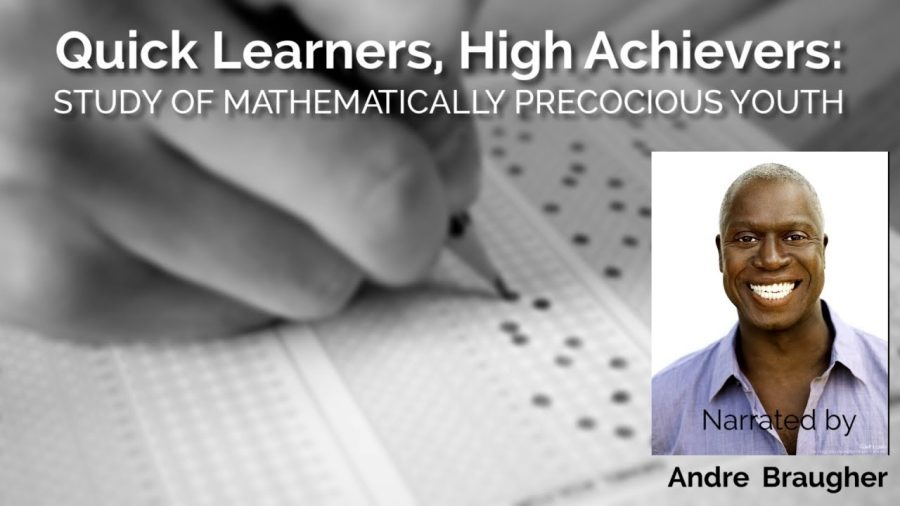 In 2014, researchers at Vanderbilt’s Peabody College published published their 45-year findings in the Study of Mathematically Precocious Youth (SMPY). This year, the study garnered attention with the release of a 14-minute mini-documentary written by Jack Isenhour, produced and edited by Lyle Jackson and narrated by actor Andre Braugher.

SMPY began at Johns-Hopkins University under Julian Stanley in 1971. The study was the first of its kind; no research of this scale had been performed regarding the gifted, and no study had sought to follow them for so long. Camila Benbow, now the Dean of Vanderbilt’s Peabody College, was Stanley’s last graduate student and adopted the project in 1990 upon Stanley’s retirement. She then brought it to Vanderbilt with co-director and psychology professor David Lubinski.

SMPY asked 13-year-olds to take the SAT and tracked individuals in top 3 percent to top .01 percent in quantitative or verbal reasoning ability through adulthood. Particularly, SMPY was interested in how individuals’ early academic skills relate to their educational level achieved, career choice and accomplishments such as patents won, studies published and books later in life.

The check in showed that many of the “precocious youth” had gone on to achieve high levels of education and achievement. For example, while two percent of the general population earns doctorate degrees, 46 percent of the males and 32 percent of the females in the group had earned doctorate degrees. The study also found that these gifted children had gone onto lucrative careers, with a median income of $139,000 for the men in the study and $79,000 for the women, both above the 2014 US median income of $52,000.

Overall, the study revealed that gifted individuals need specialized treatment to thrive. SMPY’s findings spurred the creation and augmentation of many of the gifted education programs in place today.
our philosophy has always been that every kid deserves to learn something new every day
“More and more, you have kids showing up to high school having already mastered all the high school math curriculum,” Lubinski said. “What are you going to do with these kids? They’re going to be bored to tears. You have to make adjustments, you have to meet their needs.”

Lubinski said he believes that curriculum should depend on ability rather than the age of a student. He advocates for treating early childhood education more like a university model, in which students are eligible for classes based on their demonstrated ability to handle those classes, rather than their age.

“What we need to do is extend the principles used at Vanderbilt to intellectually talented kids at all levels,” Lubinski said. “If you want take a class at Vanderbilt you can approach a professor, they’re never gonna ask you how old you are, they’re going to ask you – do you have the prerequisites? Have you mastered the curriculum that you need to take this class? That’s what we need to do for gifted kids, see if they have the prerequisites, have they mastered the curriculum they need to take this class. Start with them, at their level of development, and present the curriculum that matches that.”

Lubinski said the research team’s hope is that over time there will be more opportunities for gifted students to access educational opportunities at the breadth and depth they need to fully develop their potential.

“Even within major cities, there are huge individual differences in principles, in terms of how receptive they are to individuals who learn at precocious rates,” Lubinski said. “There are laws in place, thank goodness, in this country, so kids with developmental delays get their needs met. There are no laws for the gifted. And our philosophy has always been that every kid deserves to learn something new every day.”