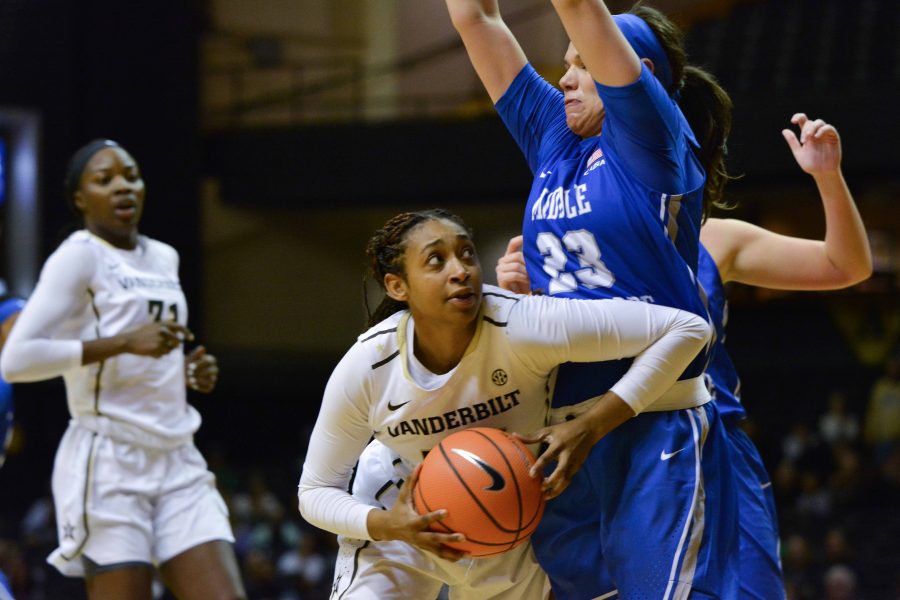 The Vanderbilt Commodores opened up year two of the Stephanie White era with a 65-54 loss to Middle Tennessee State on Friday at Memorial Gym.

Jess Louro led the Blue Raiders with 16 points, while Christa Reed led the Commodores with 14 points. This was a turnover-laden affair, with MTSU committing 17 turnovers and Vanderbilt committing 19. Vanderbilt also committed 29 fouls during the game, and saw their two leading scorers, Reed and Kayla Overbeck, foul out.

“They took advantage and did what they needed to do,” White said after the game. “We showed spurts, but we have to have more consistency in executing our details.”

The Commodores got off to a sloppy start in the first quarter. They found themselves down early, with passes not connecting and four turnovers to start the game. They did look pretty solid from beyond the arc, though, with Rachel Bell and Cierra Walker each connecting from downtown.

It looked as if they’d go into the first quarter break down by just five, but a sloppy turnover led to a Rebecca Reuter three-pointer at the buzzer to make it an eight-point Blue Raider lead.

“What MTSU did was play good position defense, and so they made it difficult for us to see,” White said. “We have to do a better job of not being robotic. Just because the play is drawn up for you to go to one area, if they take it away, we’ve got to go to a different area. We have to be able to start learning how to read defenses and capitalize on them and how they’re playing us.”

“They just came out and punched us in the mouth and we didn’t recover.”

A big issue for Vanderbilt in the first half was rebounding. MTSU was able to bring down seven offensive boards in the first two quarters, despite Vanderbilt bringing some size in the paint in Overbeck, Bree Horrocks and Blessing Ejiofor. Ejiofor made an immediate impact in her Commodore debut, grabbing a defensive rebound in her first moments in the game in the first quarter.

The second quarter was a much different story. With some of the mistakes cleaned up, the Commodores ran a sound offense, getting some support down low from Overbeck, as well as more threes from Bell. Vanderbilt traded leads with the Blue Raiders towards the end of the half, and found themselves down by five after 20 minutes. Overbeck and Bell finished the half as the team’s leading scorers with eight points each

The third quarter was all Blue Raiders, as MTSU dominated all facets of the game. Vanderbilt committed many of the same mistakes that plagued them in the first half. In addition, they got into some foul trouble, as their leading scorer to that point, Overbeck, fouled out midway through the third quarter. One of Vanderbilt’s other top rebounders, Ejiofor, had to sit for much of the half with four fouls.

“We were a little short on the post rotation anyways, so that certainly hurt,” White said. “She was very efficient for us when she was in there. She’s working her way back from injury and things too, so the more experience she can get on the floor and more of a rhythm is better for us. But, she’s got to be smarter. We had 29 fouls and I’ll bet at least half of them, maybe three quarters of them we’re unnecessary.”

A strong end to the quarter put the ‘Dores to within 10 going into the fourth. Strong play down the stretch from Christa Reed kept this one close, but a series of mistakes kept the Commodores from making it a real thriller. Vanderbilt went just four for 13 from the field in the fourth quarter, while some strong defense kept the margin to around six for much of the quarter.

Vanderbilt will take on CMU next on Tuesday, November 14 on the road.