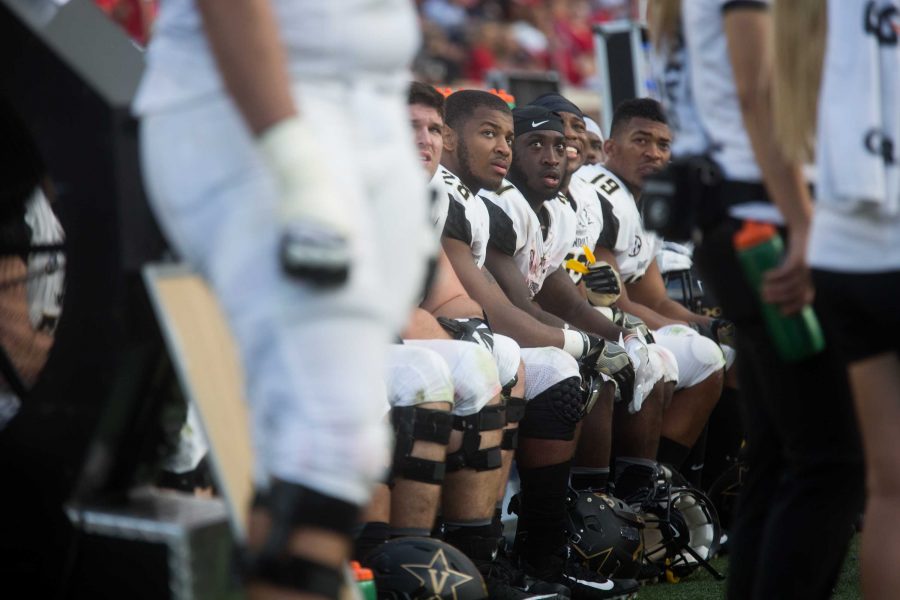 It’s Vanderbilt’s bye week, which means Commodore fans will be looking for games to watch this Saturday. What games should you keep on your radar this weekend?

Here are three games to watch this weekend:
#10 OKLAHOMA STATE @ TEXAS
This game may seem like an easy pick for some, but Texas under first year coach Tom Herman has shown marked improvement in the last few weeks. They come into this week at 3-3, but have shown they can easily play with the big dogs in both the Big 12 and the country. The Longhorns are a few weeks removed from taking USC to double overtime in Los Angeles, and just last weekend gave an Oklahoma team with something to prove everything it could handle in the Cotton Bowl.

Oklahoma State has looked impressive at many points during the season, but when they got their big test at home to Big 12 rival TCU, the Cowboys failed, losing 44-31. With the obvious exception of the Horned Frogs, Oklahoma State has played a very easy schedule, and an early game in Austin could prove to be a major trap against a Texas team looking for its first big win under Herman. Don’t be surprised to see this game be closer than its seven-point spread on Saturday, with the definite possibility of the Longhorns putting a big win under their belts.
#19 MICHIGAN @ #2 PENN STATE
Perhaps the most hyped game of the weekend features a Big Ten battle between Penn State and Michigan. The Nittany Lions have been incredibly impressive through seven weeks, boasting a 6-0 record behind the play of current Heisman Trophy frontrunner Saquon Barkley in the backfield.

Michigan has seen their season unravel over the past few weeks. They lost starting quarterback Wilton Speight to a back injury two weeks ago, and backup John O’Korn has failed to impress in a loss to Michigan State and an overtime win over middling Indiana last weekend. For Michigan to have any chance to win on what should be a raucous night in Happy Valley, they need to find some way to run the ball against a Penn State defense that has been incredibly stingy, giving up just over 100 yards per game on the ground.

Penn State is coming off a bye and has the sour taste of a 49-10 beatdown at the hands of the Wolverines last September, their most recent regular season loss. This game has both the potential to be a great one or one that Penn State runs away with, and judging by which way both teams are trending, I’m inclined to settle on the latter.
11 USC @ 13 NOTRE DAME
This game involves two historic rivals in desperate need of a signature win to get their seasons off the ground. Both came into the season with considerable hype, but have seen their seasons derailed slightly in the early going. USC lost on the road in Pullman to a very good Washington State team, while Notre Dame lost at home to a Georgia team that has turned out to be far and away the class of the SEC East.

USC quarterback Sam Darnold is projected as the top pick in the NFL draft in the spring, but has shown some trouble holding on to the football. He leads the nation in fumbles and has also tossed 9 interceptions to go along with his 15 touchdown passes.

The Irish are led by running back Josh Adams, whose 129.3 rushing yards per game ranks him at 7th in the country. The big matchup in this game will be between the USC defense, which has looked to be the strong point of the team throughout the season’s early weeks, against an Irish rushing attack that is averaging over 300 yards per game.

Whichever team loses is this game is essentially out of the playoff race, so expect this one to be hotly contested in all facets. Notre Dame being at home certainly gives it an edge, but many in the country are waiting for Darnold to show the country why he has earned so much hype. Could this be the week?