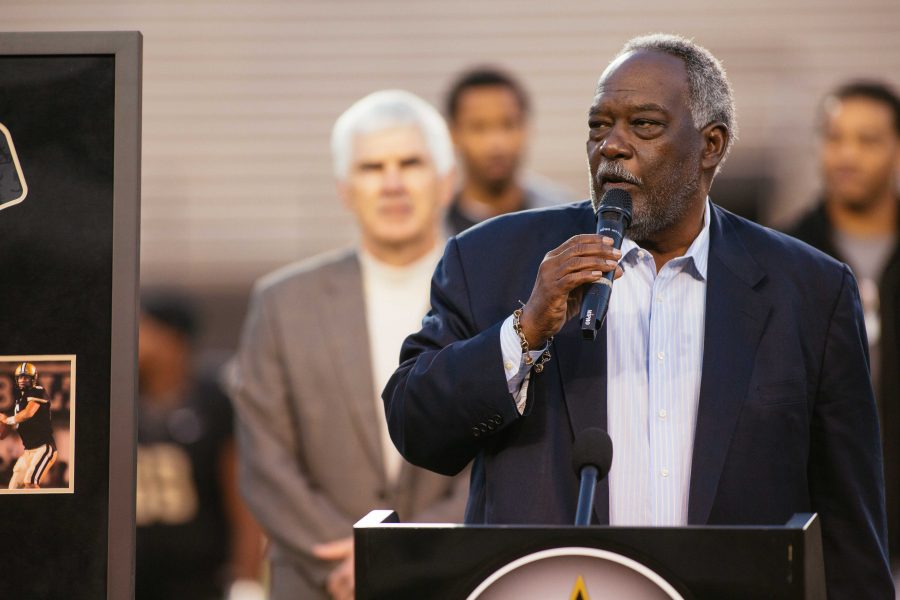 Vice Chancellor David Williams told the Vanderbilt Student Government Senate on Wednesday that the school could enter into a lease with a potential MLS stadium at the fairgrounds for “a minimum of two” events per year.

The Senate heard from Williams before passing a resolution opposing playing “a majority or all” of the school’s football home games.

The meeting was scheduled while students were under the impression that football games may be moved to the off-campus location. But earlier in the day, Vanderbilt officially announced it would not move Vanderbilt football home games to the proposed stadium, but would welcome having “one or two” events at the stadium per year.

According to Williams, the MLS2Nashville group and Vanderbilt had discussions within the Chancellor’s committee on the issue of playing games at the proposed stadium at the Fairgrounds, but the possibility of playing all of the home football games at that stadium was not feasible.

“I can’t say that there was never a discussion that was brought to us,” Williams told the Senate on if the possibility of completely moving the football team. “As I said before, if I was the ownership group, I would love that. I would be remiss to say that that would not have been something that they might have thought about and may have brought up.”

“We said in every statement we released ‘You get your plan and we will look at it. And we’ll look at it and see if it benefits Vanderbilt, its students, its fans, its faculty and staff, and then we will make a decision about what we do.’ Certainly, in that committee that was happening, we looked at all sorts of stuff. Did we look at, was it feasible to basically play football games down there? Certainly. We did our due diligence and we came back and said no.”

However, with the possibility of completely moving off-campus off the table, renovations to the current football stadium are not high on his list of priorities.

“It has to fit in its proper sequence, let me just put it that way,” Williams said. “In athletics, you’re asking a specific athletics question. In athletics, we pride ourselves on the fact that we don’t take money from the university to do any of our capital projects, because we don’t want to take money from you [the students]. So, we have to think about how we raise the money, either as fundraising or off our operations. And our operations, we’ve done well the last few years, but it’s tight.”

Williams cited other projects as ideas that would take precedent over a stadium facelift.

“I would say to do something in that stadium, the cost would be so high, that I think there are other things that are more important, and I’ll give you an example,” he said. “We just, last year, finished a brand-new training room. That training room helps every student-athlete that we have over there. I think that was 150 times more important than renovating the stadium that doesn’t help one student athlete in there.”

He understood the amount of interest in seeing Dudley get renovated, but he implored that there are more important things to handle first.

“I would say the concept of renovating a stadium, I know people want to see it, I know people write me about it all the time,” he said. “It has to get in the queue with everything else. I would say to you ‘Am I spending time at night looking at stadium designs and thinking about how I’m going to raise $158 million to do a stadium?’ No. I’m not.”

Williams denied reports that Vanderbilt was discussing financing the construction of the stadium or was part of the MLS group’s deal with the city to build the stadium. He also said they did not make their stance on the stadium clear sooner because they did not want to hurt the city’s chances of winning an MLS franchise.

“Our plan is we want to help Nashville get this soccer franchise, but we’re not going to let it be done on the backs of Vanderbilt,” he said.

What the school has on the table, according to Williams, is that Vanderbilt will agree, once the group gets their stadium plan approved, to negotiate a lease agreement with the MLS group that Vanderbilt will have a minimum of two events in the stadium each year for the first 10 years.

Williams cited a game like Vanderbilt’s matchup with Alabama A&M as the kind of game they’d take to the new stadium, but a game like this past weekend’s against Alabama would remain on campus. In addition, he also thought the Music City Invitational soccer tournament, featuring Vanderbilt’s women’s soccer team, could be a potential event in the new stadium, as well as an employee celebration day.

He also said the group will know in the first week of December if they have won one of the first two expansion franchises to begin play in 2021, or if they will have to wait for the next two franchises the following year.

Despite assurances that the school had no plans to move most or all football games off-campus, the Senate still passed the resolution as a way to ensure the university knows the student stance opposing moving the full-season slate of football games away from the campus going into the future.