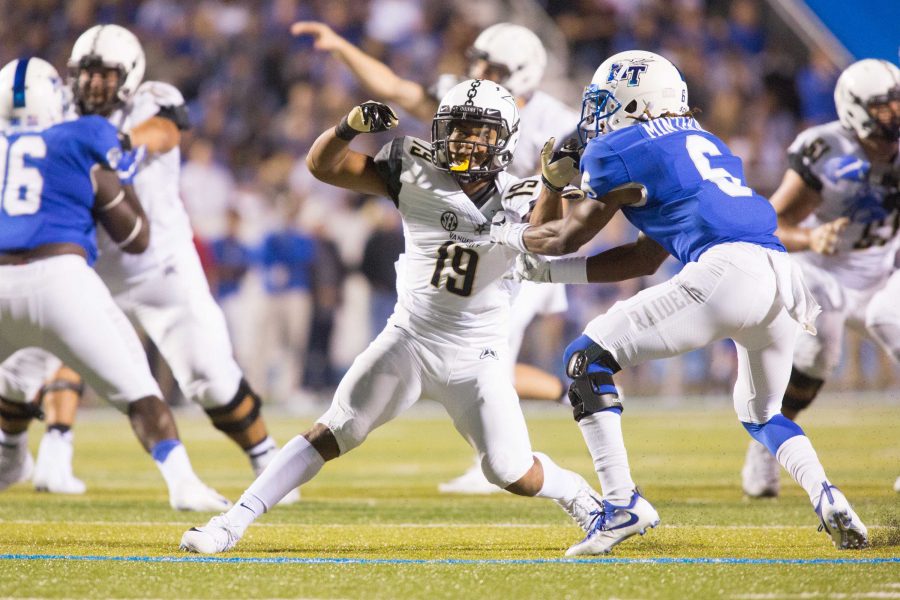 There was no torrential rain.

There was no key missed pass interference in the fourth quarter.

There was no puke (at least not on the field).

Vanderbilt just went out and won, beating Middle Tennessee State 28-6 in Murfreesboro, shaking some opening night demons in the process.

From the opening drive, it was clear that the Commodores had ice in their veins and fire in their eyes, both on the offensive and defensive sides of the ball. This team wanted to start 1-0, and were rewarded as such.

If this is any indication of what’s to come this season, we could be in for a fun season on West End.

Here’s our instant analysis from the field last night:

And here’s your Commodore Brunch menu for the first week of the 2017 season:
Shurmur Goes Scorched Earth
Head coach Derek Mason said he expected a good year for quarterback Kyle Shurmur, based on his confidence level and his mastery of the offense.

I don’t think even he expected the Kyle Shurmur he saw tonight.

From the first drive, Shurmur looked absolutely electric, making strong, confident throws through traffic and in all situations. He threw a passing touchdown on a deep 37-yard completion to Kalija Lipscomb in the first half, and threw a screen pass to Ralph Webb for a long touchdown in the second half.

So much for the “revamped” MTSU defense under Scott Shafer.

A lot of the success had to do with the stellar protection provided by a new-look offensive line. A line that featured a mixture of veterans and young players allowed just one sack. Shurmur was on his feet for most of the game, and that allowed him to be successful.

“They did a good job,” Mason said. “First time out. Again, against a pressure defense, I thought they handled the pressure. Kyle got hit one time, and that was a miscue.”

Put simply, this is a quarterback that is comfortable, confident and primed for a breakout season. Heck, he didn’t even need to establish the run game before he started balling out. He got right to it in the first quarter.

Shurmur showed signs of his true potential at the end of last season, but struggled to find his rhythm in the Independence Bowl.

Any concerns about his flukiness should be buried, along with that guy that Jared Pinkney truck sticked in the second quarter. Yowzers.

This has gotta hurt. pic.twitter.com/vjRsuGQKS7

Defense Strong Up Front
With the losses of Zach Cunningham and Adam Butler in the front seven, there were questions going into the season about this defense’s ability to stop the run and stifle quarterbacks.

Players like Oren Burks and Charles Wright gave Stockstill fits throughout the game. He was pressured play in and play out, was forced into some errant passes, had many passes blocked at the line and spent a good amount of time on the turf.

They found one of the few ways to neutralize an elite, mobile quarterback.

Mason made it a point to be hard on these defensive linemen, demanding more sacks and more pressure this season.

To say they delivered is an understatement.

“I talked about having better pass rushers in 2017 than I had in 2016, and I thought that tonight, those guys brought it and I’m extremely proud of that,” said Mason.

When Stockstill was able to get free and complete passes, Vanderbilt’ secondary had his number as well. Despite a few key mistakes and misses, the Commodore secondary held MTSU to just 9.2 yards per completion, and held them significantly beneath that through most of the contest.

While Vanderbilt may not have their “rib man” in Butler anymore, the current Commodores sure did feast on the Blue Raiders.
Special Teams Miscues
If there were any causes for concern in this game, they lied in special teams. Sam Loy was excellent at punter, averaging 41.9 yards per punt. He helped stifle the MTSU offense by pinning them deep.

However, kicker Tommy Openshaw, despite doing well on kickoffs, missed a 31-yard field goal late in the first half.

While one missed field goal is no cause for panic, it’s something to keep an eye on as this season progresses. The special teams looked better than they did last year, but missed field goals in closer games than this could be costly.
RIP Opener Losing Streak
This was Vanderbilt’s first opening-week victory since 2011, the first year of James Franklin’s tenure. Between 2011 and 2017, each of Vanderbilt’s openers ended in spectacular disasters for the Commodores.

Between Jordan Matthews puking on the field, a missed pass interference call late in the game, a miserably-failed two-point conversion in the final minute and a rainy night against Temple, Vanderbilt had its fair share of opening week misery.

Consider the chip successfully dumped off the shoulder.

Vanderbilt looks to go to 2-0 next Saturday when they take on Alabama A&M at Vanderbilt Stadium.