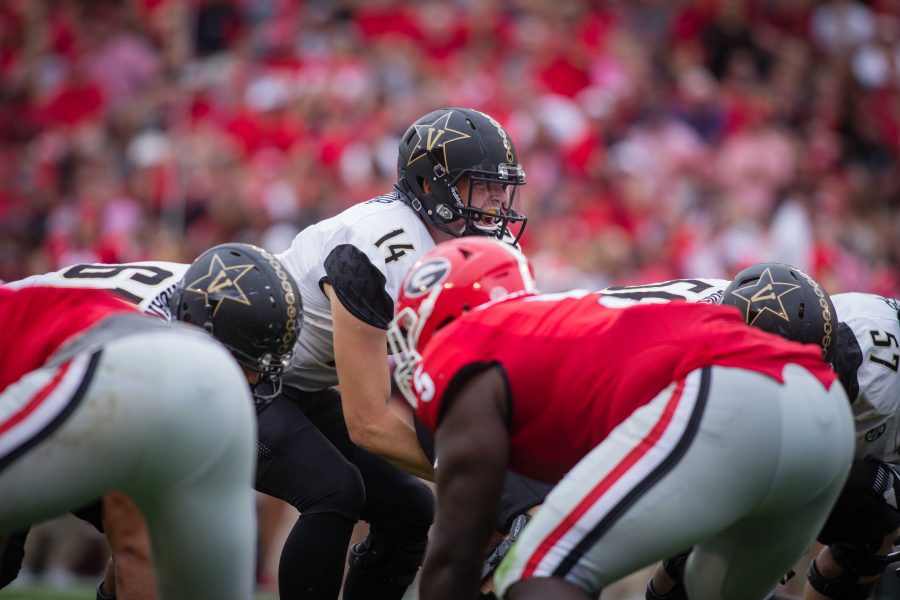 October 15th, 2016 – Kyle Shurmer on the line of scrimmage during the Commodores' 17-16 win against the University of Georgia in Sanford Stadium Saturday afternoon. Photo by Blake Dover.

After months of waiting impatiently, the time has finally come. No more waking up past noon on Saturdays. This weekend, we wake up at 11:00. It’s time for SEC football.

To continue our tradition, we, the staff of The Vanderbilt Hustler, feel as though it is our moral obligation to share our weekly power rankings with you all. This preseason edition is a special one—every SEC team will receive both a ranking and a comparison to a Nashville restaurant that we see as their counterpart.

Without further ado, here are our preseason power rankings:

No matter how much you may hate Alabama, you can’t argue with this ranking. Head Coach Nick Saban has built a dynasty; they are truly the crème de la crème of college football and will be playing with a chip on their shoulders after a heartbreaking loss in last year’s championship game. Etch shares a similar reputation as one of the best (and most pricey) restaurants in Nashville. Where else can you pay nearly ten dollars for a side and not feel bad about it?

Despite the popular opinion, we find it hard to rank LSU any lower. Both head coach Ed Orgeron and Veteran quarterback Danny Etling have a lot to prove, but the Tigers have the firepower (in the form of Junior running back Derrius Guice) to be elite. That firepower is about as dangerous as the lethal “Shut The Cluck Up” flavor of Hattie B’s Hot Chicken, thus their inevitable pairing.

Auburn is coming off a disappointing end to their last season, capped by a loss to Oklahoma in the Sugar Bowl. Filled with veterans, this team has plenty of experience, but to be a successful team, running back Kamryn Pettway needs to repeat his stellar performance from last season (122.4 yards per game, first in the SEC). Pettway and quarterback Jarrett Stidham could successfully pull off an old-school, ground and pound offense—their counterpart, Edley’s BBQ serves up tasty, old-school barbeque and they pride themselves on being “a tribute to all things southern”.

Like Auburn, Arkansas features a great run game in the form of quarterback Austin Allen and running back Devwah Whaley. They have the potential to break out, but their team is very one-dimensional. In his four seasons as head coach, Bret Bielema has only coached one elite defense. Any defensive mishaps will surely make it difficult to stop other SEC powerhouses. High upside, but not much depth—sounds a lot like Jeni’s. If you’re in the mood for ice cream, you really can’t go wrong with Jeni’s, but their roster is also quite thin. Don’t count on getting anything other than ice cream there.

Last season was a roller coaster for Kirby Smart in his first season as Georgia’s head coach. They were upset by teams like Nicholls State and Georgia Tech, but showed promise by finishing the season strong. The Dawgs’ claim to fame is their run defense—their entire front seven has returned from last season, adding experience to their incredible size and athleticism. These seven have a combined weight of over 1800 pounds, so it’s only fitting that we pair Georgia with Monell’s. Featuring family-style comfort food, Monell’s portion sizes are meant for sharing. That is, unless you eat with Georgia’s front seven.

The consensus in the sports world is that the Aggies coach Kevin Sumlin is on the hot seat. After a very strong start last year, they came crashing down towards the end and are in need of a strong year and a bowl game victory after a heartbreaking loss to Kansas State in the Texas Bowl.

However, despite losing #1 overall pick Myles Garrett and their starting quarterback, the Aggies have a lot to look forward to such as the potential emergence of quarterback Kellen Mond and another strong season from WR Christian Kirk. Clawson’s Pub & Deli is a deli known for their good food but their high prices could be seen as a reason to shut down. With a tough schedule this year that the Aggies are going against, they could also be seen as a team that could get shut down. However, their talent and spark on both sides of the ball could propel them to a strong season and another potential bowl game, maybe even a tier higher than the bowl they were in last year, much like how the quality of food at Clawson’s will likely keep it popular for years to come.

Like the hot spot Chuy’s, which struggles with their appetizers, Florida will get off to a slow start. An almost inevitable loss to Michigan is looming at the start of their season, especially due to the loss of 10 players to suspension (as of right now) including standout receiver Antonio Callaway.

Other than that, Florida seems solid, returning key players on the offensive side and bringing talent on both sides of the ball. Much like Chuy’s’ entrees, Florida seems poised to have a great midseason. They won’t disappoint unless they can’t get over what seems to be an almost certain 0-1 start, just like how Chuy’s won’t disappoint if people can get past their underwhelming appetizers.

Simply put, Mississippi State’s season will go as far as its offense can take it. They don’t have much help on defense, so their fate rests in the hands of junior quarterback Nick Fitzgerald and running back Aeris Williams. Given Fitzgerald’s incredible speed, they have the potential to make some noise.

Even as a quarterback, Fitzgerald finished last season comfortably atop all major rushing categories for Mississippi State. Much like Mississippi State’s offense, The Grilled Cheeserie is mobile. You can find this food truck in a different Nashville location every day, and it’s been voted best in the business for six straight years. Now that they’ve opened a stationary restaurant as well, its dual-threat approach draws a parallel to Fitzgerald’s playing style.

Despite returning highly touted sophomore quarterback Jake Bentley, South Carolina lacks the firepower necessary to bring them to the next level. With that being said, it is hard to knock their talent on both sides of the ball. In addition to Bentley, they return some big names such as linebacker Skai Moore and extremely athletic and underrated tight end Hayden Hurst.

Just like The Southern, which is known for their good food yet below-average service, teams will be able to pounce on their lack of speed. However, their leadership and experience could be what propels them into a bowl game just like how The Southern’s reputation and consistent food leads customers to look past their slow service.

Call us biased, but despite coming in with the lowest recruiting class in the SEC and losing stud linebacker Zach Cunningham, the Commodores look like they could be back in a bowl game this upcoming year. They come in with a strong return on both sides of the ball, keeping key offensive weapons in running back Ralph Webb, quarterback Kyle Shurmur and wide receiver Caleb Scott. Like the famous SATCO, Vanderbilt does well with the ingredients they’re given and tends to retain its status among fans as a consistently pretty solid force in the SEC and in college football in general.

Tennessee is the epitome of a team whose name carries more weight than their performance. A strong recruiting class highlights what could be a turnaround for the Vols, but the lack of return of key starters such as running back Alvin Kamara and a dependence on guys who didn’t step up for them last season makes it hard to picture them finishing well this upcoming season.

Cabana is a restaurant whose name too carries more weight than its performance. People tend to go there for their food and wine pairings yet their food is hard to classify as higher than mediocre. It’s hard to say that Tennessee’s performance this year will be nearly as high as their preseason rankings due to their dependence on unproven factors.

Just like a Chinese restaurant in the South, Kentucky just doesn’t belong. A historically basketball-minded powerhouse it just never fits in the conversation for SEC football. However, with that being said, they are fresh off an unexpected breakout year and return numbers on both side of the ball including quarteterback Stephen Johnson who led last year’s run.

It’ll be interesting to see how they turn out this year, but for now we decided to go with the safe pick as them regressing to their historical place in SEC football, similar to how PF Changs fits in with the Southern food down here. Because, hey, everyone could always good for a solid Chinese meal every now and then.

Missouri is a very interesting team to watch this year. Last year, they were relatively highly touted, yet finished a disappointing 4-8 under watch of new head coach Barry Odom. You could point out the retention of 10 starters as a reason for them to be higher up on this list, but it’s an offense that averaged just 22.6 points against SEC opponents and had 10+ point loses in 5 of its 6 conference losses.

The other side of the ball is a disaster as it was already bad enough last year and losing 8 starters is a huge loss to a defensive unit that can’t afford to be any worse. Shoney’s is also a restaurant that can’t afford to get much worse. Like Mizzou’s defense, the dinner side can’t lower its quality as inevitably, its lack of good non-breakfast food will catch up to it and jeopardize the success of the restaurant as a whole.

Olé Miss comes into the season fresh off of wild allegations involving former head coach Hugh Freeze, and therefore has little to nothing to really play for this year. In addition, it is hard to be successful after losing key offensive weapons such as quarterback Chad Kelly and athletic tight end Evan Engram and the overhaul of much of the coaching staff all while coming back from a losing season.

Hence why we chose the now-closed “Bar Luca”, a hot spot wine bar, as our restaurant comparison. While it was once popular, like Olé Miss, its time has come and gone, leaving it a bleak future for some time to come.