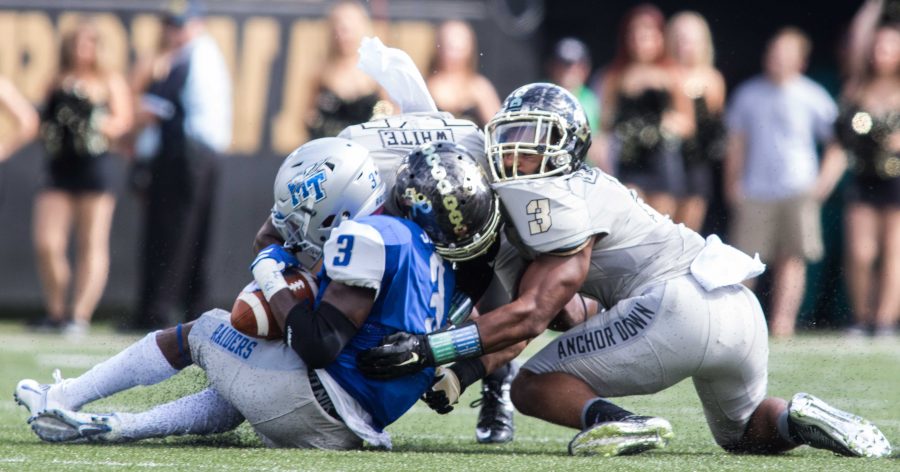 As the first game of the football season approaches, Vanderbilt is set to take on the Blue Raiders of Middle Tennessee State.

To get an inside look at MTSU, the Vanderbilt Hustler went behind enemy lines to chat with MTSU Sidelines sports editor Rusty Ellis about the Blue Raiders, as well as the matchup this weekend.

Vanderbilt Hustler: Brent Stockstill has made waves at quarterback for MTSU. How much has he been able to improve between last season and this season?

Rusty Ellis: One thing that has made Brent Stockstill so successful as a whole is his ability to take care of the ball. Many great quarterbacks have that quality, so the fact that he has thrown only 17 interceptions compared to 61 touchdowns in his first two seasons is something that has contributed to his growth as a player. As far as improvements from last season to this season, it’s mainly just that he’s gotten healthy. Many forget that he threw for over 400 yards and four touchdowns in the Hawaii Bowl when he wasn’t 100 percent healthy. Add in that he has more weapons than ever in the receiving corps and he could have his most productive season yet.

VH: MTSU has started each of the last five seasons against an FCS opponent, now they’re starting against an SEC opponent. What impact does that have on the trajectory of the whole season?

RE: This could have heavy ramifications. The way I have put it is that there isn’t an easy win on the schedule. This goes into the whole idea of Coach Stockstill wanting to improve the culture and overall talent of the program by playing tougher competition. This is a game that many people have marked on the schedule, along with the Western Kentucky game in November. I honestly believe that if they don’t win this game, the Blue Raiders have a very real possibility of starting the season 0-3 and that could come back to bite them in the latter part of the season.

VH: The Blue Raiders will be starting an entirely new defensive line this year, and they’ll have to try and stop Ralph Webb in their first game. How can the coaching staff prepare them for such a tall task right off the bat?

RE: With the hiring of Scott Shafer in the offseason, the Blue Raiders got a coach that is bringing a more aggressive mindset to this defense. It is no secret that while the offense thrived last season, the defense had more than its fair share of troubles. They have preached bringing an aggressive mindset of everyone attacking the ball and not shying away from contact. The play of newcomers on the line like Walter Brady, Malik Manciel and Rosheem Collins will be a big factor in how the run defense performs this season.

RE: This is certainly a game that both teams have circled on the calendar. For this to become a real rivalry, I think MT will have to take Saturday’s game, but there is certainly the feeling of disdain between the two teams. With how competitive the last meeting in Murfreesboro was, I expect this game to be even more testy as each team is going to give everything.

VH: What is your prediction for the game?

RE: This is a tough game to predict. On one hand, if the front four on the defensive line for MT can hold and get pressure, Vandy will need top-notch quarterback play. On the other side, if the front four doesn’t play well, Ralph Webb could have another field day. I believe that playing at home is what’s going to will Middle Tennessee to victory by a final score of 27-24. Make no mistake, this will be a great opening game to watch.