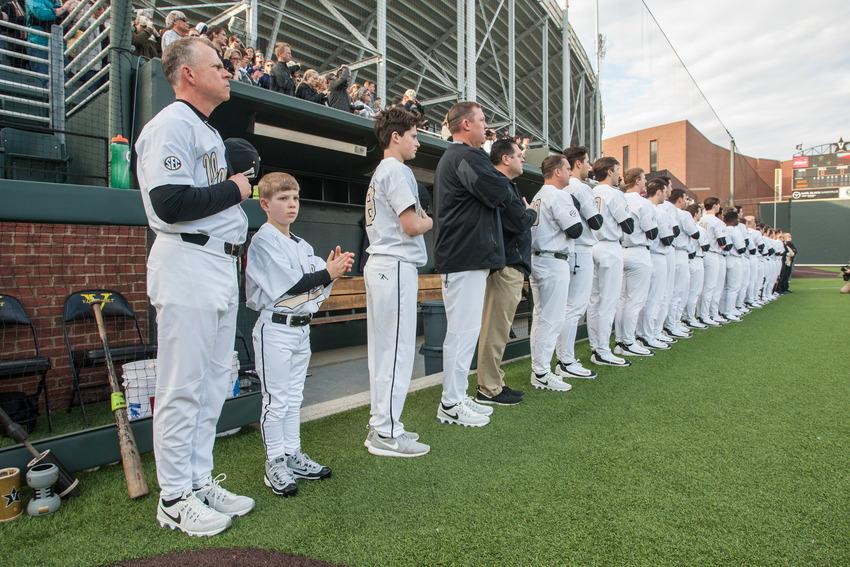 Once again ranked in the top 10 to start the season, Vanderbilt baseball will take the field Thursday for its season opener at San Diego with high hopes. Head coach Tim Corbin returns for his 15th season with a more experienced starting lineup than last year, and it’s got plenty of talent.

Here’s what you need to know about the team’s starters, arranged in what we expect the batting order to look like to start the year.

Wright is poised for a dominant year as the ace of the Vanderbilt staff and should be a top-10 pick in the MLB Draft this June. Wright’s four-pitch mix continues to improve as his changeup develops, complementing a mid-90s fastball, a sharp cutter and a slow curveball. Pitching behind 2016 first-round pick Jordan Sheffield last season, Wright posted a stellar 1.77 ERA in his 10 SEC regular-season starts, striking out 72 batters in 66.1 innings. This year, he’ll start on Friday nights and oppose fellow SEC aces, including Florida’s Alex Faedo and Missouri’s Tanner Houck, two more likely top-10 picks. — Max Herz, sports reporter

A four-year contributor for the Commodores, Coleman will get more opportunities in the field than ever due to Vanderbilt’s lack of outfield depth. Coleman hit a disappointing .236 in 2016 and drew only 15 walks in 166 at-bats, both of which he’d surely like to improve upon this year. Never a premier base-stealer, Coleman should nonetheless serve as a net positive on the base paths, and his small strike zone always frustrates opposing pitchers. If Coleman is to stay as the team’s leadoff hitter all year, however, he’ll need to post an on-base percentage better than last year’s .317 mark. — Robbie Weinstein, Sports Editor

If you’re looking for the leader of this team, look no further than center fielder Jeren Kendall. A junior from Holmen, Wisconsin, Kendall has emerged as one of the best players in college baseball, a preseason All-American and a projected top-five draft pick by all accounts. Kendall is coming off a breakout year in which he hit .332 with nine homers, 59 RBI and 28 stolen bases, leading the team in virtually every offensive category. If the team is going to make an impact in this year’s College World Series, it’ll be in part because of the bat of Kendall, who has already made his presence known in Omaha. Just ask Cal State Fullerton. — Max Schneider, sports reporter

After an impressive freshman year, Will Toffey regressed significantly on offense during his sophomore campaign. The lefty hitter saw his batting average drop from .294 to .227, while his slugging percentage slid from .420 to just .266, both team lows for everyday starters. However, Toffey demonstrated patience and a good eye at the plate, drawing a team-leading 51 walks that helped boost his on base percentage to .387. The Commodores will need Toffey to perform closer to his 2015 production, as he enters the season as one of the team’s most experienced players. A few weeks ago, Corbin mentioned during a press conference that Toffey has been taking initiative during the offseason and practices, which could be a sign of good things to come this season. — Josh Hamburger, Editor in Chief

After a delayed but productive freshman year, Infante returns for his sophomore season as Vanderbilt’s starting first baseman and a potential force in the middle of the lineup. A broken wrist kept Infante from making his collegiate debut until April 12, but he made up for lost time by providing the Commodores with some much-needed offense in the second half of the conference season. Infante finished third on the club with six homers despite playing just 26 of Vandy’s 62 games, and half of his 22 hits went for extra bases. It would be no surprise for Infante to lead the team in home runs this season. — Max Herz, sports reporter

One of two remaining contributors from the 2014 national championship team, Delay turned down an 11th-round selection from the San Francisco Giants to return for his senior season. After three years of sharing time behind the plate with Karl Ellison, Delay will play nearly every day following Ellison’s departure for Lynn University in Boca Raton, Florida. Delay saw the most action of his college career in 2016 when he started 42 games, hitting .248 with 31 runs batted in, tied for fourth-most on the team. Delay will have more freedom than ever while handling the young Commodore pitching staff and should contribute in the middle of the Vanderbilt batting order. — Max Herz, sports reporter

Paul was an instant contributor to the Commodores in his freshman campaign. He started 45 games, providing adequate defensive play at both shortstop and second base. Paul was primarily a weapon at the plate, batting .305 and hitting 31 RBI, good for fourth on the team. The promising sophomore will begin the year as the team’s DH, although he’s expected to spend time at second base as well. Look for Paul to improve on his impressive freshman season and become a team leader in 2017. — Torben Ginsberg, sports reporter

As a freshman, Jones started finding his way as a Commodore, playing a mixed role as an infielder and designated hitter. While a .285 batting average might not seem like a stellar year, he made great strides in his development. He had 47 hits, fourth-most on the team, including 15 doubles. However, more importantly, he showed off his incredible speed with 10 stolen bases, the most on the team aside from Kendall. In 2017, he should move to a more permanent role as a second baseman and see less time at DH. Between Jones and Coleman, the Commodores might have one of the fastest duos in the country. Look for Jones to find himself in a much bigger role than last season and to continue to torch the base paths. — Cutler Klein, Asst. Sports Editor

A big, athletic sophomore with great potential, Kaiser immediately staked his claim to the starting spot at shortstop as a freshman last year. Kaiser impressed defensively, but his early struggles at the plate led Corbin to take him out of the lineup in favor of other options like Paul and Jones. After returning to the lineup late in the season and boosting his batting average up from about .220 to .261, however, Kaiser looks like a potential breakout player for this year. With another offseason in the weight room, he should be able to contribute far more extra base hits this year after hitting only five in 119 at-bats in 2016. If nothing else, the Commodores know they’ll get consistent defense from Kaiser. — Robbie Weinstein, Sports Editor

As of now, it’s unclear what exactly Bleday will bring to the team, but he’s slated to start in right and bat toward the bottom of the order. Corbin describes the freshman as a well-rounded, confident and mature player for his age, and much of that has to do with his experience prior to Vanderbilt. Bleday played year-round in sunny Panama City Beach, and the San Diego Padres drafted him in the 39th round of the 2016 MLB Draft. Vanderbilt expects Bleday to contribute immediately at the plate, and he projects as a good enough defensive player to cement himself as a starter; Corbin feels he has the versatility to play in left, as well. With the Commodores’ relative lack of outfield depth, they’ll need Bleday to play well. — Robbie Weinstein, Sports Editor