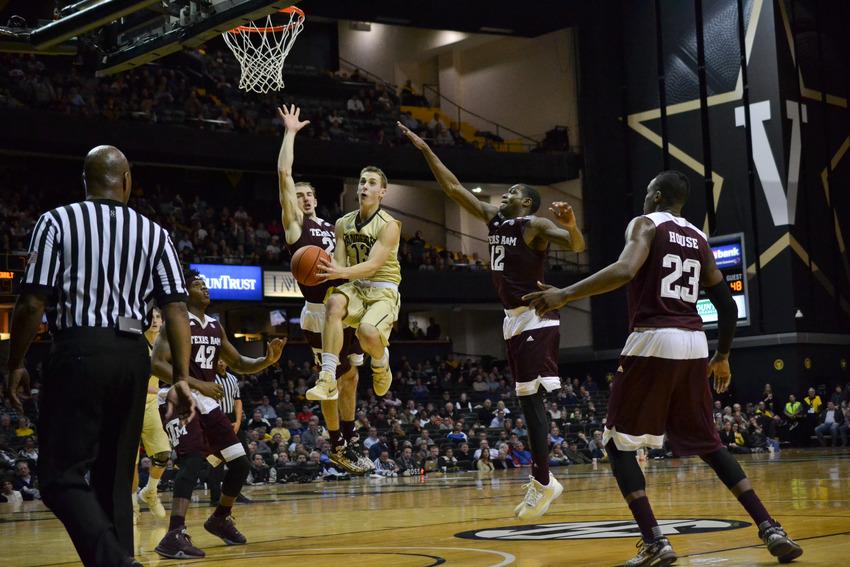 Vanderbilt will come into Thursday night’s matchup with Texas A&M desperate for a victory.

The men’s team has dropped two of its last three games, with the losses coming at the hands of SEC opponents Ole Miss and lowly Missouri. Barring a magical SEC Tournament run, a second consecutive NCAA Tournament berth is likely out of reach for the 12-13 Commodores. That being said, there are still several marquee conference matchups left this season, beginning Thursday night.

The Aggies have had their share of struggles this season as well. Despite making it to the Sweet 16 of the NCAA Tournament last year, they find themselves on the outside looking in at this point in the season. Sitting at just 5-7 in conference and 13-11 overall, they need a similarly unlikely SEC Tournament run to have any realistic shot at returning to March Madness.

This is a team with more talent than its record shows, however, and it has played tight with some of the best teams in the country this season, including losses to West Virginia, Arizona and UCLA by a combined 15 points.

Vandy took care of the Aggies in College Station a couple of weeks ago. In that first matchup, the Commodores got hot in the first half and never looked back. Five players scored in double figures as they took home the victory, 68-54.

Looking ahead to Thursday night’s game, expect the Aggies to continue to force the ball inside, much like they did the first time around. Sophomore center Tyler Davis had a field day in the paint against the Commodores the first time around, scoring 18 points on 8-of-9 shooting. Vandy will try to force the Aggies into jump shots, an area where they are a below average team. On the season, A&M is hitting 6.4 threes per game at a 33.6 percent clip. That places them in the 45th percentile nationally, according to Synergy Sports Technology.

The Commodores, meanwhile, often live and die by the three, hitting 10 per game at a 38.3 percent rate. Those numbers are some of the best in the country, putting them in the 85th percentile, per Synergy. What is promising for the Commodores about the first meeting between these teams is that Vandy was able to pick up a dominant win despite shooting poorly from beyond the arc. The Commodores shot just 9-of-27 from outside but outscored the Aggies in the paint 38-32 and won the rebounding battle.

Texas A&M is a team that relies on rebounding and post play. The Aggies out-rebound teams by 5.6 per game, which is the 37th-best mark in the nation. They also run post-up plays on 17.7 percent of their possessions and score .905 points per possession on those plays, which ranks in the 85th percentile nationally, according to Synergy. Neutralizing two of the A&M’s biggest strengths is what led to a Commodore victory in January.

Both teams should be comfortable with the slow pace of play in this one. Despite the fact that it is primarily a jump-shooting team, Synergy data shows Vandy generates only 68.3 possessions per game, which ranks 314th nationally. The Aggies aren’t much faster, sitting at 277th with 69.5 possessions per game.

The pace should be a slight edge in the Commodores’ favor, given how terrible they have been at defending against transition. Vandy has allowed a whopping 1.136 points per possession in transition according to Synergy, one of the worst marks in the country.

Should the Commodores contain the interior play of the Aggies, then expect another home victory. A&M showed no signs of being able to contain the Commodore offense the first time around, and that was on a cold shooting night from outside. Look for the ‘Dores to come out firing, hoping to bounce back with another in-conference victory.