With the right approach, Vanderbilt can roast the Hogs 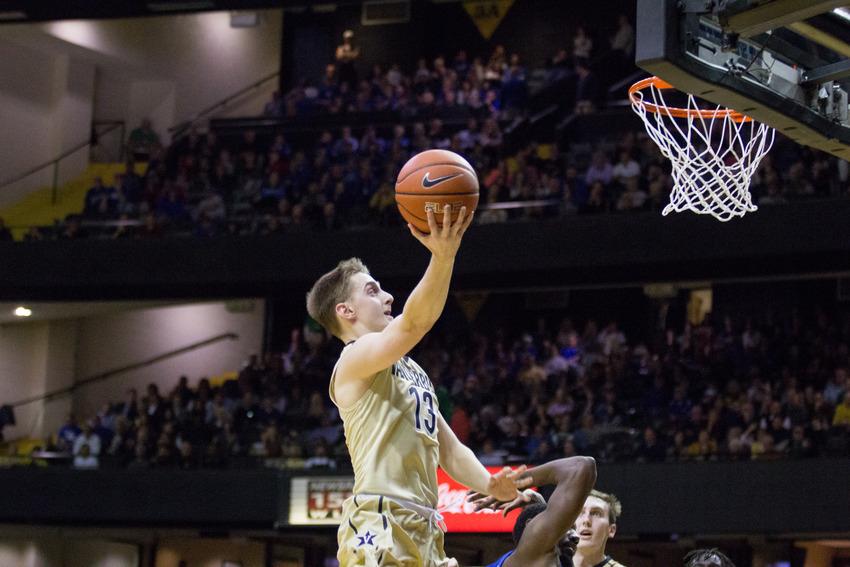 Vanderbilt will take the court Tuesday night against Arkansas with an opportunity to rack up a second straight quality win. The Commodores got strong games from a number of contributors in their big win at Florida over the weekend, but one player in particular will be key to their chances — or, LaChances — against the Razorbacks.

Surely you’ve guessed it: Riley LaChance has potential to light up Arkansas, and head coach Bryce Drew will need his new starting point guard to be at or near his best Tuesday.

LaChance’s promotion back to the starting five couldn’t have come at a much better time. Not only has the junior guard put together a tremendous season on the offensive end of the floor, but his refined point guard skills should cause Arkansas headaches.

“LaChance is playing like he did as a freshman. I think he’s kind of regained his confidence, and with a new coach it takes time,” Arkansas head coach Mike Anderson said. “… It’s gonna test our patience, especially on defense, because they don’t mind getting up and down the floor.”

The Razorbacks have put up so-so defensive numbers against a so-so schedule this year. While center Moses Kingsley locks down the interior — Arkansas ranks in the 85th percentile defensively around the basket, according to Synergy Sports Technology — Anderson’s squad struggles on the perimeter.

Specifically, Arkansas’ guards have trouble defending the pick and roll. According to Synergy, the team as a whole rates in the 12th percentile nationally in point per possession allowed against pick-and-roll ball handlers. Starting guards Jaylen Barford and Daryl Macon rate in the ninth and 30th percentiles, respectively, while bench contributor Manny Watkins rates in the 14th percentile.

Bad news for the Hogs: LaChance is one of the best pick-and-roll ball handlers, rating in the 98th percentile by Synergy’s database. On any given play, he’s a threat to launch a three-pointer, knock down a one- or two-dribble pull-up or get all the way to the rim.

Although Arkansas’ Anton Beard ranks in the 83rd percentile at defending the pick and roll, he only averages 22 minutes per game. LaChance will surely end up getting his fair share of opportunities against Arkansas’ weaker defenders, and he’s a threat to roast each of them every time down the court.

LaChance has also done well as a passer this year, leading the team in assists with 4.1 per game. The Razorbacks are putrid defensively against hand-offs and when opposing players come off screens, rating in the seventh and ninth percentiles, respectively, according to Synergy. LaChance has both the passing skills and understanding of the offense to get the ball to Vanderbilt’s shooters in these situations, which makes this matchup even worse for Arkansas.

What’s more, Drew has utilized sets with more planned, intricate off-ball movement as the year has gone on. This hybrid of sorts between Drew’s self-described free-flowing offense and former coach Kevin Stallings’ highly organized philosophy has allowed shooters like Matthew Fisher-Davis and Nolan Cressler to find shots that are more comfortable for them. Running shooters off screens via sets like these seems the perfect strategy against the Razorbacks, and Vanderbilt shouldn’t be starved for open shots on Tuesday.

“I’m hoping [opponents’ three-point shooting] probably the thing that’s come to our attention, that we gotta do a much better job of guarding the perimeter, because we’ve had teams that have kind of torched us,” Anderson said. “Going in, we know this team can certainly shoot the basketball. They can put the ball on the floor. So we’re gonna have to be at our best on defense. We’re gonna have to in line and talking when we switch; we gotta be on the same page defensively.”

While the Commodores’ defense needs to be ready too — Arkansas’ offense rates similarly to Vanderbilt’s in adjusted efficiency, according to Ken Pomeroy — excellent offense could be enough. If Vanderbilt takes full advantage of its matchup advantages on the perimeter, especially with LaChance, then the ‘Dores can win in a shootout.