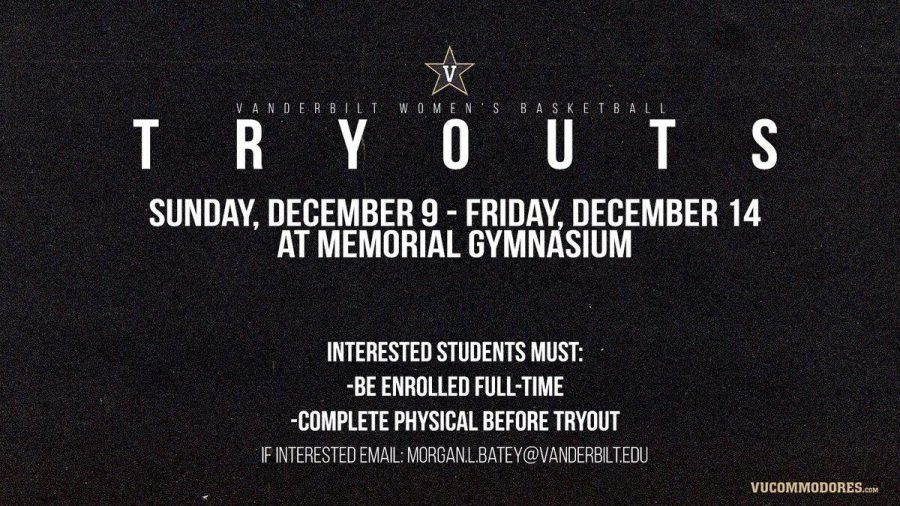 Graphic pulled from @VandyWBB on Tiwtter

The Vanderbilt Women’s Basketball team will hold an open tryout for students from Sunday, December 9th to Friday, December 14th, the team announced on Twitter.

Interested students must be enrolled full-time at Vanderbilt and complete a physical before trying out. Anyone interested should email Morgan Batey ([email protected]).

The Commodores began the season with just 10 active players, nine of whom are on scholarship, after losing many key players to graduation or transfer in the offseason. Despite working with a shorthanded roster, the team has shown promise. So far, their 3-5 record includes decisive wins against Tennessee State, Austin Peay, and Presbyterian.

Regardless of the game’s outcome, transfer student Mariella Fasoula, sophomore Chelsie Hall, and freshman Brinae Alexander have made the most of their opportunities. Those three players have scored as many as 25, 23, and 22 points, respectively. There’s certainly potential on this roster, but their individual season highs in minutes played have reached a worrisome 38 (or in the case of Chelsie Hall, 40), which sheds light on one pressing issue: the lack of depth.

In their last game, a road loss to Kansas State, Hall and freshman Jordyn Cambridge did not play. With center Bree Horrocks still out with blood clots, the team was down to just seven players, six of whom are on scholarship.

If their last matchup against Kansas State tells us anything, it’s that this team is in serious need of more bodies. Without Hall and her consistent 35 or more minutes played, only five players other than Alexander and Fasoula made appearances against the Wildcats: Autumn Newby, Cierra Walker, Kaleigh Clemons-Green, Isabella Paldrmic and LeaLea Carter.

In fact, Isabella Paldrmic, a walk-on player herself, logged just two minutes in this game.

The good news for the Commodores is that they have an incoming freshman class with six players that could make a tremendous impact next season, so these depth issues could be more of a short-term problem.

Now, the Commodores are looking for their next walk on to make an impact. Whichever lucky students get a call-back from head coach Stephanie White could be able to make a real impact.

Opportunities to walk onto a legitimate SEC basketball team are sparse, so White should have plenty to choose from come Sunday.