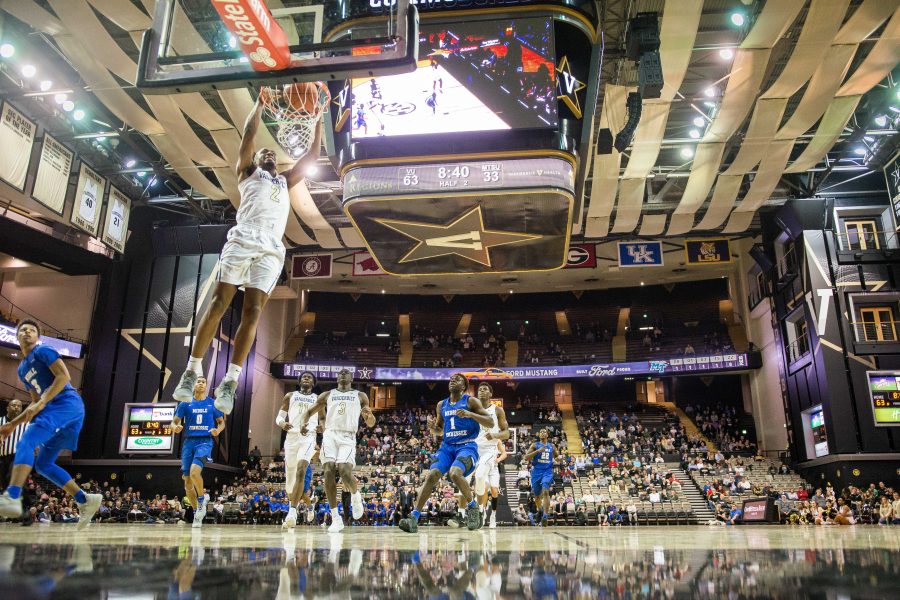 The Vanderbilt Commodores put on a show in Memorial Gym on Wednesday night, handily beating the Middle Tennessee Blue Raiders 79-51, effectively bringing the magic back to Memorial Gym.

After a tough loss to NC State that made Commodore fans worried that the team might be doomed from the loss of Garland, Vanderbilt bounced back in a big way. The outcome was never in doubt, and at least for one night, Bryce Drew and his team showed that this is a lot more than one star freshman.  There are a lot of newcomers with the potential to make this team special.  Simisola Shittu (15 points) and Matthew Moyer (14 points) showed that against Middle Tennessee.

The game started out slow offensively, with Middle Tennessee up 3-2 going into the first media timeout.

“We’re learning how to play again without someone who has been there the whole year for us, so it is a process,” Drew said.

But, this was the first and only lead for the Blue Raiders as Vanderbilt came storming back. Back-to-back 3 pointers from Matthew Moyer and Saben Lee, along with a monster dunk from Aaron Nesmith gave the Commodores a 10-5 lead.

The Commodores never looked back after that initial lead and continued to widen the gap throughout the rest of the game.

It was a game of runs for the Commodores, as they went on a 6-0 run with just over 3 minutes remaining in the first half, and then went on an 8-0 run to end the first half.

The second half brought similar results. Going on a 9-0 run with 11 minutes to play in the second half, the Commodores extended their lead to 32, up 65-33.

The Commodores finished the game strong, never giving Middle Tennessee a chance to come back.

“Coach Drew has faith in me to take them and make them,” Moyer said. “I keep putting in the work and will keep on getting better and better.”

While the three point percentage was strong from the Commodores, the name of the game on Wednesday night was free throws. The Commodores scored 17 free throws in a row, missing only with 12 minutes and 31 seconds remaining in the second half.

The Commodores went on to go 18-19 overall from the free throw line, a 94.7% shooting percentage. This compares to the Commodores last game against NC State, where they shot just 60 percent from the line.

“We’ve been designating a lot of time during practice to make sure they’re getting a lot of free throws in,” Coach Drew said. “They were a lot more confident from the free throw line tonight than they have been.”

Defense also played a critical role in the Commodore’s success over the Blue Raiders. Vanderbilt ended the game with seven steals and forced 14 turnovers.

“Leading up to the game we put in a lot of work on the defensive in,” said Max Evans. “It all just translated to the game and it was all planned.”

The Commodores shined bright at home on Wednesday night, but now face a 12 day break until their next game as the Commodores face another tough battle: final exam week.

“It is scientifically proven that exercise helps your studying,” Coach Drew said. “We won’t run them too much, but we will get some practice time in.”

After exams, the Commodores look towards their next game at home versus Arizona State on December 17th at 6 pm CT.