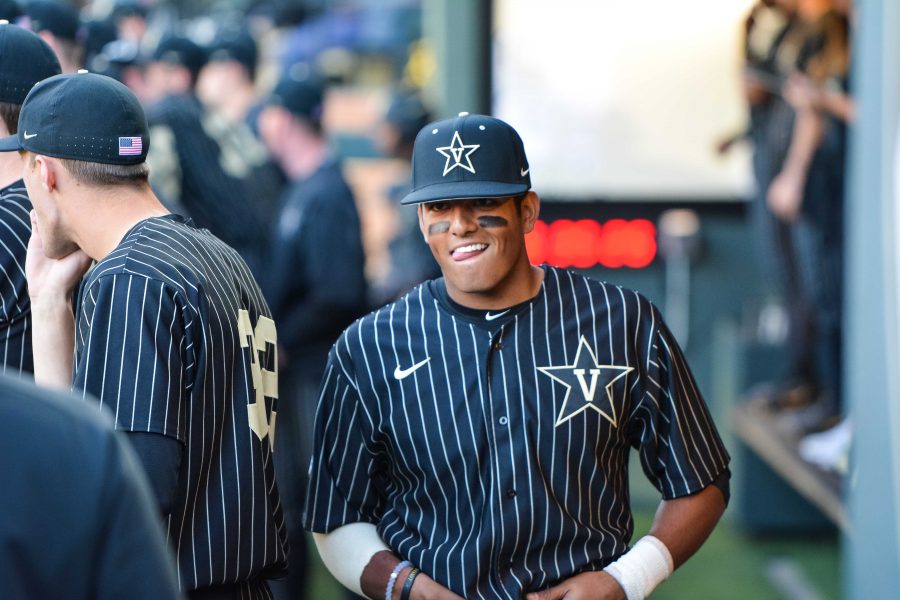 We have reached the Sports Equinox here at Vanderbilt.

In a week where football takes on Missouri with bowl aspirations on the line, basketball tips off its most anticipated season in years, and soccer hosts its opening round NCAA Tournament game with its season on the line, the Vanderbilt baseball team has a little action of its own.

That comes in the form of the Black and Gold Series, which kicked off Thursday night at Hawkins Field.

In the annual intersquad three-game set, it was the Gold Team that took game one in seven innings by a score of 4-2.

And while it might have been one of the colder days of fall season, that didn’t stop the Vanderbilt bats from coming alive.  The Vandy Boys clubbed three homeruns, picking up where they left off at the end of last season.  Two of those came from catchers Dominic Keegan and Philip Clarke, continuing the Commodore tradition of power behind the plate.

On the mound, Vanderbilt’s ace in Drake Fellows dueled it out with sophomore Tyler Brown.  Fellows looked sharp, save for a couple mistake pitches, showing life on a fastball that sat around 93-94 for most of his outing.  He threw five innings, giving up just three hits and two runs, while striking out four.  His counterpart hurled four innings, allowing four hits and two runs, striking out five.  Both pitchers earned no decisions.

After zeros in the first from both sides, Keegan opened the scoring in the top of the second.  The freshman backstop turned around a Brown fastball deep into the left-center field seats, inciting an eruption of cheers from the Gold dugout.

Fellows continued to move smoothly through the second and the third, retiring the Black Team in order.

After Gold failed to take advantage of a one-out infield single from Cooper Davis in the third, Julian Infante doubled down the first base line to give his team another one-out baserunner in the fourth.  This time, the Gold Team capitalized.  Harrison Ray pulled a double into the left field corner to score Infante and double the lead.

Down 2-0, Black’s bats came alive in the fourth.  After Pat DeMarco struck out to start the inning, Clarke launched one over the right field fence to cut into the lead.  He ended Fellows’s streak of nine straight batters retired with the long ball.

Not to be outdone, Jayson Gonzalez drove a fastball just over the wall in right center just two batters later, showing tremendous opposite field power to knot the game up at two.

Hugh Fisher relieved Brown in the fifth to face Kiambu Frentress, who promptly reached on a throwing error by Gonzalez.  The big third baseman made a stellar play in the hole, laying out to make the stop, but a throw that pushed first baseman Sterling Hayes off the bag allowed Fentress to reach base.  Fentress then stole second and advanced to third on a groundout, but Fisher ultimately struck out Stephen Scott to strand the runner.

Fellows got his groove back in the bottom of the fifth, throwing a 1-2-3 inning, and Fisher quickly followed suit for Black in the top of the sixth.  Justin Willis replaced Fellows in the sixth, notching a clean inning of his own.

In the seventh and final inning, Gold started to get to Fisher.  Freshman third baseman Justyn-Henry Malloy laced a double to the base of the left center field wall, and Fentress singled to left and stole second. Davis drew a walk to load the bases with just one away, and Austin Martin walked on just five pitches, scoring the go-ahead run.  Scott tacked on an insurance run on a sacrifice fly to left to make it 4-2 in favor of Gold.

The Gold Team brought in AJ Franklin to close out the game in the bottom of the seventh, and he didn’t disappoint.  The junior left-hander from Lebanon, Tennessee induced a flyout off the bat of JJ Bleday before striking out Gonzalez and Ty Duvall to end the ballgame and give Gold a 1-0 lead in the series.

Game two will be played Friday at 5:00 at Hawkins Field under the lights.