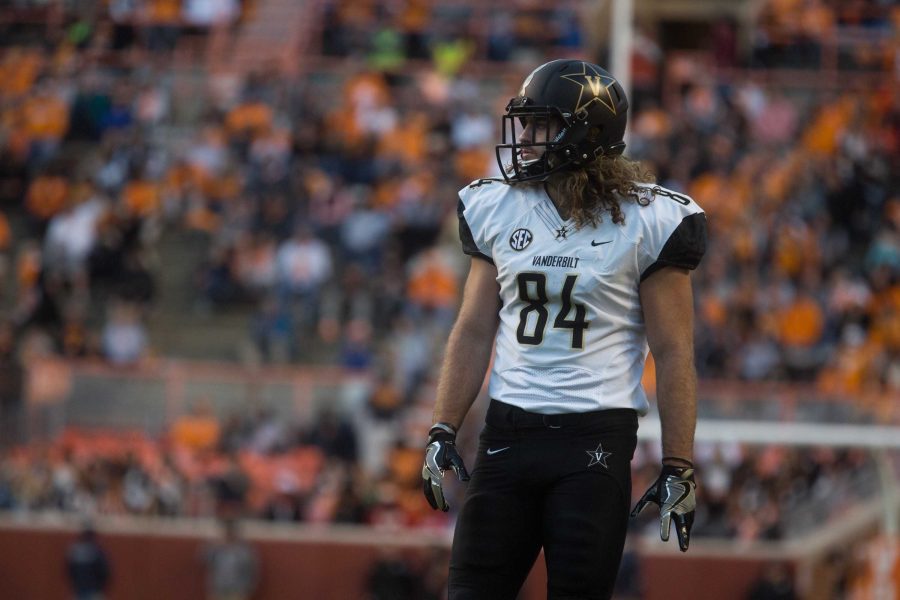 Sam Dobbs is not your average football player.

Rewind to November 26th, 2016. The bowl-eligible Vanderbilt Commodores are set to host the 17th-ranked Tennessee Volunteers in their final game of the season. The Commodores were on a mission. They wanted to prove to the nation that they were more than just a five-win team, eligible to go bowling thanks to a novel technicality.

Early in the second quarter, Kyle Shurmur dropped back in the pocket and fired a dart to his tight end, Sam Dobbs, for a touchdown. Turns out, Dobbs himself was on a mission. As the ensuing celebration revealed, he wanted to prove to the nation that he was not just a football player, but rather, a composition of two unique personae.

His on the field persona is unique in itself.

Dobbs is a 6′ 4″, 230-pound tight end with a vast array of skills. In games, the versatile threat can be recognized by his long, curly hair, which covers the name on his jersey and falls just above his number. He can be seen blocking in front of a monstrous SEC defensive line, or as a legitimate receiving threat.

As for off the field?

“Honestly, I can play any instrument with strings,” Dobbs said. “Just to name a few of my favorites, I play the guitar, ukulele, violin, and mandolin. I also play the piano. And of course, I can play the drums. But you can’t forget about the sub-categories; I can play bongo drums and those kinds of things. Oh, and I also have some experience with wind instruments like the flute.”

“Ever since I started making my own music videos, I’ve just loved the process of making a movie,” he said. “I love doing each and every step myself; recording a song, writing a script, then shooting a video of myself doing whatever it may be. Then I love spending hours editing the video to create something I can promote on social media and Youtube.”

If you were to ask Dobbs himself, he’d get carried away describing everything he does off the field.

So on that cold November evening, when Dobbs caught a twenty-yard touchdown against Tennessee, how could he possibly show the world his two sides?

“That was the easiest celebration I’ve ever come up with,” Dobbs said. “My first half scored a touchdown, while my other half strummed an air guitar in the end zone. Obvious choice.”

Lucky for Dobbs, Vanderbilt provides the perfect intersection between his two halves.
Football in the SEC: The First Half

Dobbs has football in his blood.

His father, John Dobbs, played football at Auburn University and encouraged Sam to get involved at an early age.

“My dad has always been a huge influence on me, especially with him playing in Auburn back in the day,” he said. “He would always tell me these amazing stories about his experiences; one of my favorites was about how he’d get run over by Bo Jackson time and time again.”

In fourth grade, his father decided it was time for Sam to get his foot in the door. However, after one season in pee-wee football, Sam thought it wasn’t meant to be. He quit football, for now.

His hiatus lasted no more than a few months.

“I realized just how much I missed it,” he said. “Being on a team, being with my friends, getting out there and having another family. I went right back to it because I felt like I needed to.”

Eventually, his journey landed him a spot on the Commodores. When he arrived his freshman year, offensive coordinator Andy Ludwig was impressed with what he saw.

Dobbs had played lots of wide receiver in high school, making him an intriguing tool for this offense. However, Ludwig knew he had the size to play tight end. It was not going to be an easy switch to make, but he knew Dobbs could handle it.

“It’s a difficult transition because he had to come straight in, bulk up a little, and handle tough blocking schemes,” said Ludwig. “That said, Sam is a tough, athletic guy so we all had faith. I’m very pleased with his growth and maturity, and we’re looking forward to him playing the best three games of his career this month.”

Dobbs was happy to make the transition, but when Commodore wide receivers went down with injuries his freshman year, he was ready for his number to be called.

His versatility shined bright during the adversity; despite practicing as a tight end, Dobbs stepped right into SEC competition as a true freshman to play wide receiver. Furthermore, Ludwig referred to him as “a big part of our offense that season.”

At Vanderbilt, Dobbs was given the perfect opportunity to do one of the many things he loves at the highest level: playing football in the Southeastern Conference.
Artistic Expression at Vanderbilt: The Second Half

Dobbs came into school as an engineering student, something he still gets a kick out of. He knew it was not meant to be, but luckily, Vanderbilt had a Film and Media Studies major that fit the mold.

Filmmaking has always played a role in his life. In fact, as a YouTube persona, it’s even found its way into his football career.

In Dobbs’ freshman year, former Vanderbilt linebacker and current Green Bay Packer Oren Burks, approached him about his talent. Burks mentioned a film-making competition at the annual Vanderbilt Athletics Banquet, and figured Sam would be the perfect person to approach.

“When Oren said that to me and complemented my videos, that was pretty cool to hear as a freshman,” he said. “The opportunity was even cooler, so I immediately wrote a script, and the rest was history.”

His script was a spoof that recreated stereotypes of different football players. He took full autonomy of the project from writing the script, to directing, to shooting the footage, all the way to editing. It ended up as a hit on YouTube, racking up over 40,000 views, but Dobbs was not content.

Dobbs rebounded at the next Black and Gold banquet with another short-film. If the last one made people laugh, this one would make them laugh until they cried.

He created another priceless spoof with his teammates, only this time, it was a sorority recruitment video. The video took off within a week; after being picked up by CBS Sports, Yahoo Sports, Bleacher Report, and many other major media outlets, it tallied over half a million views.

“I think being at Vanderbilt is a huge blessing for me,” he said. “I can use Vanderbilt as a platform to promote myself as a student and as an athlete, while also promoting my skills. Whether it be making funny videos with the team, or making music and using Music City as my method of promotion, it’s a really huge combo.”

Dobbs’ musical talents are not to be overshadowed by his film. He seems to play the same number of instruments as views on that video, and lucky for him, he’s in the Music City.

He records music at his home-made studio back in Georgia, posting many of his favorites on YouTube. Every time Dobbs visits home, he stays up all night to record and edit his footage. Recently, he posted his own rendition of Drake’s “Nice For What”; in the cover, he DJ’s with electronic turntables, plays the drums, the piano, and the guitar. In pure Sam Dobbs fashion, he then edited the video to overlap each of the rhythms, making an incredibly unique piece.

“That video sort of sums me up as a whole,” he said. “I couldn’t possible perform all of those instruments at once in a live show, nor could I possibly chase my NFL dream, filmmaking dream, and musical dream at once. For now, I’m just doing as much as I can until I graduate, which is when I will start working towards my NFL dream. I just wish I had multiple lives to tackle it all.”

Regardless of where Dobbs may end up, offensive coordinator Andy Ludwig knows that he’ll be successful.

“I can’t think of a way for this kid to fail. I really can’t. He’s going to be successful, no doubt about that. He’s ultra-talented in so many things, has a diverse set of interests, and such a great passion about each one.”

Sam Dobbs is a marvel of Music City: he is a football player at a gritty SEC school, a musician in the heart of Music City, and a filmmaker in the perfect place to express himself.

Sam Dobbs is the epitome of “The Vanderbilt Man.”