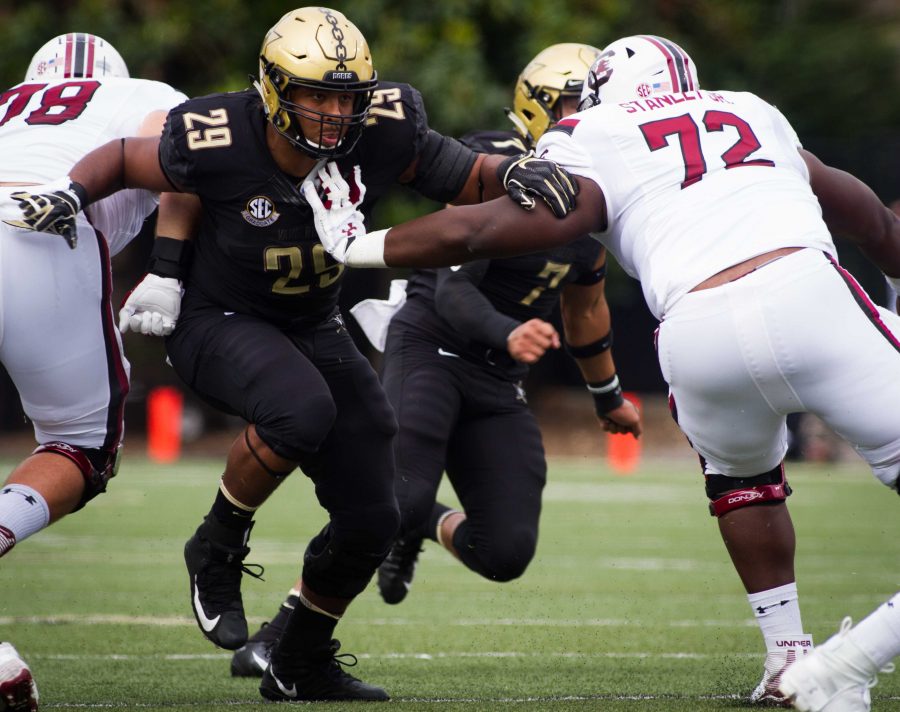 Louis Vecchio (29) bursts through the line of scrimmage against South Carolina. (Photo by Hunter Long)

Louis Vecchio is used to 4 AM wake-ups.

For him and so many other Wall Street professionals, the workday starts in the wee hours of the morning.  Vecchio has to prep for his morning meetings and work on projects all before the market opens at 9:30.  After that, coding classes, portfolio management, and stock pitches line up his schedule.  It’s all in a day’s work at Weiss Multi-Strategy Advisors, an asset management firm in Manhattan where he spent his 2017 summer.

Those early morning wakeups now serve a different purpose.  Instead of donning a white button down with a sport jacket, Vecchio is lacing up his cleats and throwing on shoulder pads.  He still has his morning meetings, but instead of looking at the stock market, he’s looking at game film.  And when that whistle sounds to begin Vanderbilt’s football practice, asset management is the last thing on Vecchio’s mind.

Vecchio’s shift between white collar and blue collar lifestyles is rare for any college athlete, let alone an SEC football player.  Sometimes he would have to squeeze in a workout before he got to the office just to keep up with everyone back on campus.

“It was definitely challenging but a total blessing,” he said.  “All the guys are still at school working out and I have to work a five to eight job and still make sure I get my workouts in to come back ready to go for the season.”

For Vecchio, academics have always come first.  His parents, Bonita and Louis Jr., have instilled that in him throughout his life.

“They said the door’s going to stay open down the road, God willing and everything, so just handle the academics first and just take it step by step,” said Vecchio.

That advice led Vecchio to turn down some of the powerhouse football programs that recruited him out of high school, like Colorado, California, Boise State, and even Stanford.  He instead opted to attend the University of Pennsylvania, enrolling in The Wharton School, the university’s top-ranked undergraduate business program.  It didn’t take long for Vecchio to find out why the school had earned such a distinction.

In his first year on campus, his calculus professor divided the room into groups.  When Vecchio looked around at his group, he noticed that everybody was speaking Chinese.  None of them were from America.  The trip from Villa Park, California was nothing compared to the one that a number of his classmates made to just be at Penn.  That only made him want to succeed more.

“All the students there are just so special and it creates a very competitive learning environment,” said Vecchio.  “Just like in football, the more competitive your team is the better you guys get from within.  So that’s kind of that same culture, just academically.”

On the field, Vecchio showcased that competitive nature right away.  He saw ample time on the defensive line as a freshmen at Penn, notching four tackles against the FCS’ sixth-ranked team in Villanova.  His role figured to grow in his sophomore campaign, but his season was brought to a screeching halt by a knee injury in Penn’s week two matchup against the same Villanova team, a team that Penn beat that game for the first time in more than 100 years.

Finally, things really started to click Vecchio’s junior year.  He earned First-Team All-Ivy honors, finishing the year with 5.5 sacks, 10.5 tackles for loss, a pair of forced fumbles and a pick-six.  He nearly replicated those numbers his senior year, again getting a First-Team All-Ivy nod.

In between football seasons, Vecchio spent his summer interning at Weiss Multi-Strategy Advisors, specializing in the tech sector.  With his football future in question, he had to use what he learned on Wall Street to prepare for job interviews.  Football games on the weekends were often followed with preparations for corporate interviews during the weeks.  Vecchio viewed his work on and off the field as an aide in the interview room.

“The amount of stuff that I could talk about in an interview just separated me from everyone else,” he said.  “Wharton and Wall Street, they prepare you for life.”

Because of his knee injury that derailed his sophomore season, Vecchio still retained one year of eligibility to continue his college football career.  However, according to Ivy League rules, varsity athletes cannot compete after they have graduated, meaning Vecchio, who graduated with a Bachelor of Science in Finance and Operational Management, would have to take his talents elsewhere.  Finding another school wouldn’t be an issue, though, as nearly all of the same universities that coveted Vecchio’s talent when he was coming out of high school were still interested in the Penn standout.

Enter Derek Mason, Stanford’s former defensive coordinator that pushed so hard for Vecchio five years back.  Now at Vanderbilt, Mason had kept tabs on the former Villa Park defensive lineman, and saw an opportunity to fill a void in his team’s defense.  He wasted no time getting Vecchio on the phone.

“Right when I opened [my recruitment] up, Vanderbilt was the first school and we started communicating, and that just made it simple because it felt like we were starting on a different level of communication than all the other schools,” said Vecchio.  “Coaching staffs change over time so you don’t really know everybody, but knowing Coach Mason, we just started out where we left off.”

Vanderbilt also fit perfectly into Vecchio’s post-graduate plans, and he enrolled in the Owen Graduate School of Management.

Vecchio was virtually unknown in the eyes of the Vanderbilt fan base when he took the field to open the 2018 season against Middle Tennessee.  Questions on the defensive line circled after a historically bad defensive year for the Commodores the year before, and both Mason and defensive coordinator Jason Tarver hoped that Vecchio could be a force on the end.

The 6’5, 270-pounder immediately answered the call in his first week of action, sacking Middle Tennessee quarterback Brent Stockstill on just his second possession.  He finished the game with four tackles, two for loss, and a sack, cementing his place as a vital member of the defense.

“At the end of the day, football is football,” said Vecchio on his early success.  “But it was kind of nice to have that change of pace and show the four years I’ve put in might have made me a little different than some of the younger guys.”

Since then, Vecchio has become a mainstay on Vanderbilt’s defensive line, while still making the difficult transition from the Ivy League to the SEC.  The environment may have changed, but his ability to produce at a high level on the field hasn’t.

“The biggest shock to me was when I was on the sideline and that’s when you really start hearing, wow it’s getting kind of loud,” said Vecchio of the team’s trip to Notre Dame.

Despite the change of scenery, his consistency hasn’t gone unnoticed by the coaching staff.

“We talked about the talent on this roster and it’s a talented roster.  Lot of new guys, new faces,” said Mason.  “Vecchio has been doing a great job.  I think he’s been as consistent as we thought he’d be.”

With five games under his belt, Vecchio has at least seven more before his college career comes to a close.  For him and his family, it’s still unclear whether or not football will be in his future.  But whether it’s his pads or his suit jacket that the Villa Park native will throw over his shoulders, he’ll be up bright and early, ready for a full day’s work.

Because for Louis Vecchio, it’s just business as usual.