For Vanderbilt Football, there are no moral victories. At all. 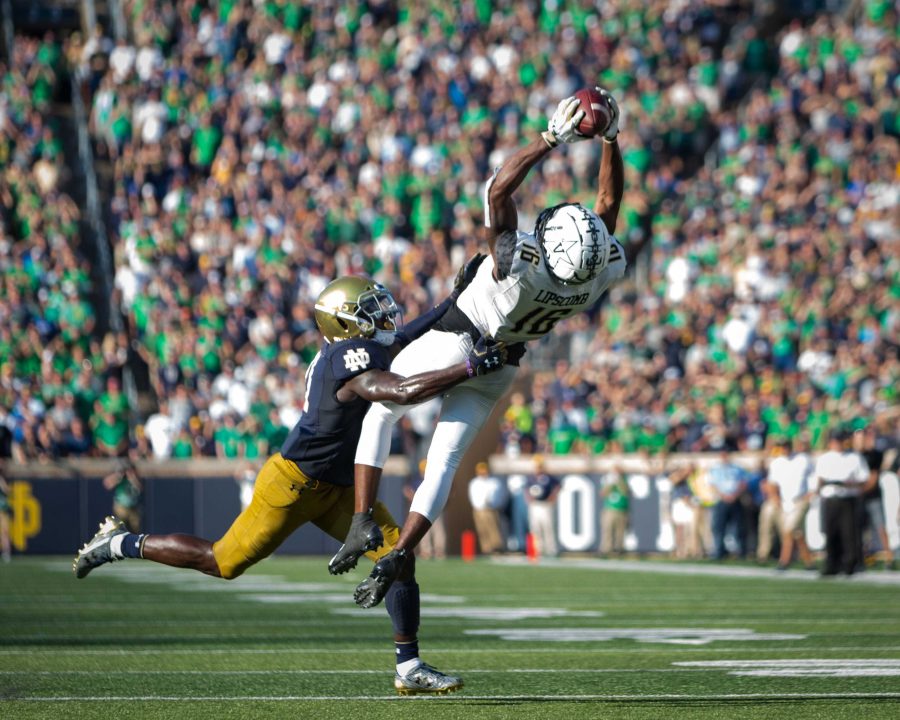 Saturday’s game against the Notre Dame Fighting Irish ended with another tally in the Notre Dame win column. Players, coaches and Commodore Faithful had high hopes it would end differently, but very few were taken aback by the loss.

The winning team may not have come as a surprise, but all things considered, the outcome of the game did. College football fans across the nation had their eyes on Vanderbilt.

Notre Dame is not to be taken lightly—they entered the game with over 1,000 votes on the coaches poll, ranking them eighth in the nation. Vanderbilt, the visiting team, hadn’t been ranked in the top 10 since 1947. They had a meager three votes in the coaches poll, placing them well outside the top 25 looking in. The Commodores were coming off decisive back-to-back wins against MTSU and Nevada, but were still the 14-point underdogs.

They played a mistake-ridden game and lost by just five points.

They suffered from two fumbles and an interception. Notre Dame didn’t turn the ball over once. Vanderbilt lost by just five points.

They fumbled on the one-yard line. Shortly thereafter, they were forced to settle for three after Donaven Tennyson dropped a very short, touchdown-destined pass from Kyle Shurmur. Vanderbilt lost by just five points.

Yes, the Commodores may have lost, but they sure did make a statement in this game. They impressed reporters everywhere, both those with and without previous ties to the school.

Proud of my school Vanderbilt for doing everything but winning at Notre Dame. Irish know they were lucky to survive. Anchor down.

(Is Vandy the second-best team in the SEC East?)

If one thing’s for sure, it’s that Vanderbilt could’ve won that ballgame. People now see the Commodores in a new light, as a team on the rise. That has to be worth something.

“If people feel good about that, great,” head coach Derek Mason said. “We don’t. We play the game to win. This isn’t little league baseball where everybody gets a trophy.”

Mason wants no praise from this game. Jared Pinkney said fans should be encouraged to attend the game because they “saw that we took a top-10 team to the ropes,” but for Mason, there’s no satisfaction unless there’s execution.

“It’s not like I can put a moral victory in my backpack, walk it down the street and get some energy from it. It doesn’t work that way. What you have to do is execute,” Mason said.

Kalija Lipscomb had himself a career day—his 11 receptions set a personal record. Lipscomb was one many Vanderbilt players to showcase great playmaking ability, drawing a large constituent of NFL scouts at Monday’s practice.

Surely, Lipscomb was wary of how impactful his performance would be on his NFL stock.

Lipscomb cited the 24-hour rule as reason to move on from this loss, but directly after the game, he had just one thought: his final target.

Lipscomb nearly made a miraculous fourth-down catch to keep Vanderbilt’s last drive, and hopes to win, alive. As he leapt and fully extended his body, he barely corralled the ball at the apex. On the descent, Notre Dame’s safety Jalen Elliot jarred the ball loose at the last possible moment. Lipscomb felt as though he deserved blame.

The Commodores may have turned heads with their performance, but turning heads was not enough.

“No moral victories. We play the game to win,” Lipscomb said. “On the bus back [I received] texts and calls that said, ‘good game’ or ‘good effort.’ I don’t want any of that. I’d rather hear ‘good win, you guys did your thing.’”

Kalija Lipscomb and Derek Mason would agree with the great Frank Robinson that “close only counts in horseshoes and hand grenades.” They came close, but Notre Dame is no longer at the forefront of their minds.

Their only focus is going 1-0 this week, a challenge that starts and ends at home against South Carolina.