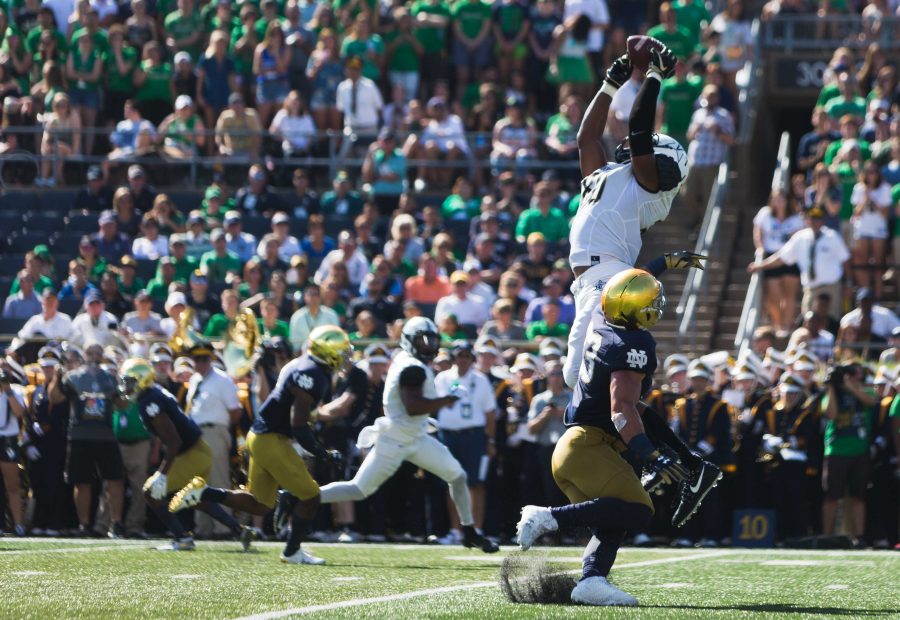 Vanderbilt lost 22-17 in a tight game to 8th-ranked Notre Dame in South Bend. The Commodores are now 2-1 on the season.

“There are no moral victories in this game. You win or you lose. That’s it,” said Coach Derek Mason.

The game didn’t start well for the Commodores. Notre Dame running back Tony Jones rushed for 19 yards on the very first play, as Notre Dame drove down the field for 74 yards before Justin Yoon made a 26-yard field goal. Vanderbilt’s defense stopped the Irish three times within eight yards of the goal line to force the field goal.

Vanderbilt responded with an eight-play, 41-yard drive that ended with a Parker Thome punt. Thome had an excellent day, punting 4 times for an average of 46 yards.

Vanderbilt’s defense missed countless tackles on Notre Dame’s next drive, a 94-yard drive ending with a Brandon Wimbush rushing touchdown to put the Irish up 10-0. The only good tackle on the drive was Donovan Sheffield’s tackle on a screen pass that stopped the Irish for a loss of a yard.

The Commodores’ response was less than ideal. Kyle Shurmur was hit as he threw the ball on third down, and he fumbled the ball. Vanderbilt recovered the fumble, but was forced to punt after a three-and-out.

Each team’s next two drives were three-and-outs. Vanderbilt’s defense buckled down, but Notre Dame also strayed away from their game plan on the first two drives, which was to use their speed advantage to gain large chunks of yardage by bouncing off the tackles and rushing on the outside of them.

Tony Jones ran for 20 yards up the middle on Notre Dame’s next drive. Dayo Odeyingbo was charged with a 15-yard unnecessary roughness penalty on the play. Jones picked up another 10 yards before Justin Yoon kicked a 33-yard field goal.

Vanderbilt’s next drive showed promise, but did not end with points on the scoreboard. On 1st-and-10 at Notre Dame’s 21-yard line, Kyle Shurmur completed a pass to Donaven Tennyson just shy of the goal line. Before Tennyson went down, he was stripped of the ball. The ball bounced into the end zone, where running back Khari Blasingame tried to fall on it, but the ball rolled out of the end zone. Notre Dame was awarded possession and a touchback on the fumble out of the end zone.

Justin Yoon made another field goal, this time a 46-yarder, to put Notre Dame ahead 16-0.

On the last drive of the half, Shurmur got into a groove with his receivers. He threw a 26-yard dart up the middle to tight end Jared Pinkney. Then, he found freshman wide receiver Cam Johnson open for a 13-yard gain before passing to Pinkney again for a 26-yard gain.

Mason said of Pinkney, “I think now he’s grown into the player he could be.”

With the ball at the Irish three-yard line and eight seconds to go in the first half, Derek Mason took a timeout. On the next play, Shurmur threw to a wide-open Donaven Tennyson, who let the ball go right through his hands, squandering an easy touchdown. Ryley Guay would make a 21-yard field goal to make the score 16-3 at halftime.

On the Commodore’s next drive, Shurmur completed three passes for thirty yards, and a roughing the passer penalty tacked on 15 more yards.

Shurmur finished the day with 326 passing yards on 26 completions.

He tried to throw to Lipscomb in the corner of the end zone, but he was double covered and the ball was underthrown. Troy Pride Jr. grabbed the interception for the Irish and returned the ball to the one-yard line.

After an Irish three-and-out, Trey Ellis returned a punt for 20 yards to set up the offense at the Notre Dame 47-yard line.

The offense took advantage of the short field. On the first play of the drive, C.J. Bolar managed to get open and caught a 30-yard pass just inside the numbers on the left side. Ke’Shawn Vaughn finished off the rest of the drive, running for 17 yards on three attempts, including a 3-yard touchdown run up the middle to move the Commodores within six points.

Notre Dame roared back with a touchdown drive of its own. Brandon Wimbush found Tony Jones on the right sideline for a 32-yard gain to put Notre Dame in the red zone. Backup quarterback Ian Book threw a two-yard touchdown pass to tight end Nic Weishar, who had no defenders nearby. Book threw an incomplete pass on the two-point attempt, so Notre Dame’s lead remained at 22-10.

Vanderbilt wasn’t going down without a fight. On a crucial 4th-and-eight on Notre Dame’s 41-yard line, Notre Dame’s Troy Price Jr. was called for pass interference, giving Vanderbilt the first down. Shurmur threw an 18-yard touchdown pass up the middle to Jared Pinkney. With Guay’s extra point, the game tightened to 22-17.

Vanderbilt got the ball back with 3:39 left in the game at their own 20. Jared Pinkney continued a career day with a 26-yard catch. Pinkney caught 5 passes for 111 yards in the game.

Pinkney said, “[the loss] is disappointing. We were supposed to win that game. We showed we were the better team.”

On 4th-and-10 at midfield, Notre Dame was called for defensive pass interference, giving Vanderbilt a fresh set of downs at Notre Dame’s 35-yard line. Vanderbilt was faced with another fourth down with 4th-and-4, but Kalija Lipscomb couldn’t come up with the catch on a high throw.

Shurmur said of the play, “I threw it a little high for him, and he had to make a great play. It just didn’t shake out.”