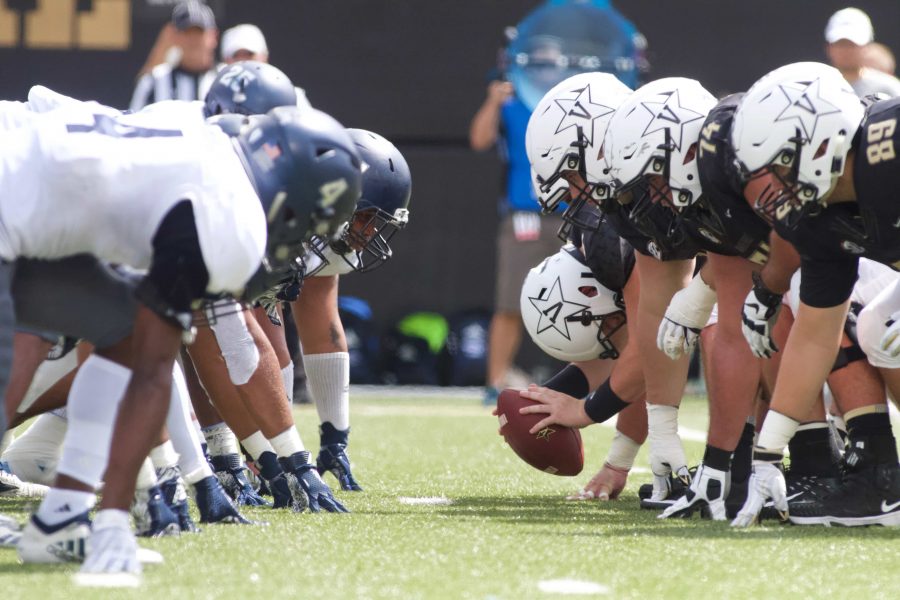 The Vanderbilt Commodores are off to an encouraging start after two blowout wins at home against Middle Tennessee State University and Nevada.

“I’m excited about the contest,” he said. “Our guys are ready. They understand what is in front of them.”

The Irish will be a large step up from the level of competition that the Commodores have throttled so far, and this game will be a good indication for how Vanderbilt will play as they start their SEC schedule the following week at home against South Carolina.

Here are three matchups to look forward to on Saturday.
WR Kalija Lipscomb vs. CB Julian Love
Junior wideout Kalija Lipscomb has been a big reason for Vanderbilt’s strong start to the season. He has already hauled in three touchdown passes and was incredibly reliable against Nevada, catching ten of his eleven targets. At 6’1”, 200 lbs, Lipscomb was simply a mismatch against that weaker competition, but he will have his hands full with Notre Dame’s Julian Love.

Love (5’11”, 193 lbs) matches up comparably with Lipscomb physically and is following his strong sophomore season with more dominant play this fall. Against Ball State last weekend, Love broke up four passes and will be Notre Dame’s best option to slow down Lipscomb.

Given Notre Dame’s size advantage on the defensive line, the passing game will need to be effective for the Commodores to consistently move the ball. If Vanderbilt is going to compete on Saturday, Lipscomb must win this matchup.
RB Ke’Shawn Vaughn vs. LB Te’Von Coney
While Coach Mason has remained committed to his tailbacks splitting the carries, eventually Vaughn’s production is going to merit an expanded workload. He is the team’s most elusive option, demonstrated last weekend on his 46-yard touchdown run against Nevada.

However, Notre Dame’s senior middle linebacker Te’Von Coney will present an immense challenge. At 240 pounds, Coney is one of college football’s top linebackers and has already racked up 24 tackles in Notre Dame’s first two games. Coney is unlikely to come off the field and is Notre Dame’s true game-changer on defense. Vanderbilt needs to get something out of its running game, and the previous two games show that Vaughn is the offense’s best option.
Notre Dame Offensive Line vs. Vanderbilt Defensive Line
While the offense has put up 35 and 41 points respectively through the first two games, arguably Vanderbilt’s biggest advantage has come from its front four. The line has already totaled nine sacks and two fumble recoveries and defense’s strongest unit. However, the Notre Dame line will be literally a much bigger task this weekend.

The Irish’s starting unit is on average 6’4” and 304 pounds. For reference, the Commodore defensive line on average is 6’3”, 279 pounds. If there is a weakness on the Notre Dame team, it is their Quarterback Brandon Wimbush. Wimbush has only completed 54% of his passes and already thrown four interceptions.

To win, the Vanderbilt defense will need to force him to make plays with his arm, but in order to do so, they must stop the run. That effort starts with the defensive line, which will need to overcome their size mismatch using speed and toughness in order to stop the run and turn the game over to Wimbush. If that happens, then an upset could be in the works.