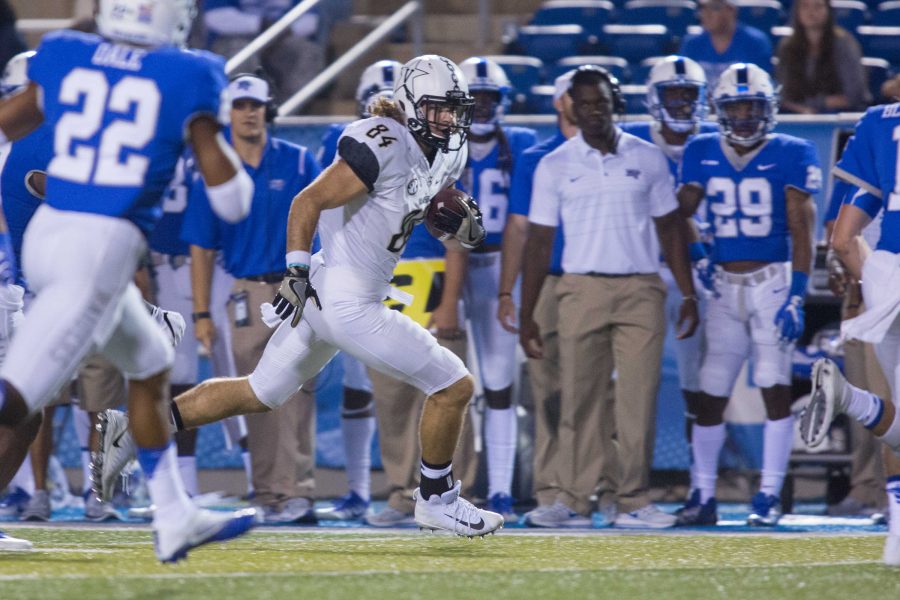 There are few things more enjoyable than waking up on a Saturday morning to constant college football, especially after such an exciting first week. Fans everywhere are eager to see what’s in store for the rest of the season after a great Vanderbilt win, a great Tennessee loss, and many touchdown-ridden games.

Saturday features the first SEC conference matchups of 2018. Before teams get a chance to face stiffer competition, we’d like to present our updated power rankings.

This year looks no different than their past, as the Crimson Tide are back with national championship savior, sophomore quarterback Tua Tagovailoa running the show.

It wasn’t just their offense getting it done, as Alabama also tacked on a defensive and special teams touchdown. Overall, they played exactly how you would expect the national champion to play. Don’t expect them to slow down anytime soon.

After Auburn lost back to back games at the Mercedes-Benz stadium, bringing their 2017 season to a bitter end, the Tigers returned to Atlanta with something to prove.

In a tough matchup against sixth ranked Washington, Auburn showed that they deserve to be in the national championship conversation. Washington boasts a very tough defense, but junior QB Jarrett Stidham remained poised, throwing for 273 yards and a touchdown. After a substantial win to start their season, Auburn finds themselves ranked 7th in the nation and 2nd in our SEC power rankings.

With star running backs Sony Michel and Nick Chubb entering the NFL draft, there was some concern that the Georgia offense wouldn’t be the same as last season. In their first game of the season, they put that skepticism to bed.

They may have played a weak opponent in Austin Peay, but they still managed to rack up 45 points, 38 of which came in the first half. The Bulldogs pulled quarterback Jake Fromm at halftime, but the defense managed to shut down Austin Peay. Georgia will have the chance to face a more perennial program this week, as they head to South Carolina to play the 24th ranked Gamecocks on Saturday.

LSU had a primetime game against a tough, 8th ranked Miami Hurricanes team, providing the stage to show they are among the best in college football.

The Tigers came out and put on a clinic.

They never trailed once in this matchup and by halftime, the Tigers led 27-3. It became obvious they were better than their initial 25th ranking. After running behind some of the best college running backs in his career at LSU, senior running back Nick Brossette took his first start and recorded more carries (and touchdowns) than he had in any game to date. He totaled 125 yards on 22 carries with two touchdowns.

On the defensive side of the ball, the Tigers played very well through three quarters, not allowing a touchdown. LSU is deserving of their increase of 14 spots in the AP poll and they will look to keep rolling against a much easier opponent in SE Louisiana next week.

475 total yards, 7 total touchdowns. No, that is not the combined offensive effort that Mississippi State put up, but the performance of sophomore QB Keytaon Thompson, who filled in for suspended QB Nick Fitzgerald.

Mississippi State mowed past Stephen F. Austin by a score of 63-6. One of the more underrated teams in the SEC, Mississippi State proved that they have an explosive offense. They can put up points with the best of them, even with a backup under center. This high powered offense is certainly something to keep an eye on as the season goes on.

After an underwhelming 2017 season began with Florida ranked 17th overall and ended with a 4-7 record, the Gators wanted to get off on the right foot. Sophomore quarterback Feleipe Franks pulled through, starting the season more poised than any point last year.

En route to a 53-6 win over Charleston Southern, Franks threw for five touchdowns, two of which went to junior wide receiver Van Jefferson. Unlike last season, Florida seems to have the firepower necessary to finish out games, something they struggled with last season.

As we enter week two, Florida was placed into the AP poll at 25th. That said, one game against an unproven team doesn’t define a season, and Florida will need to continue this streak and show their capability to beat top teams before they get ahead of themselves.

Rounding out the 7 SEC teams in the top 25, the South Carolina Gamecocks were matched up against an easy opponent in Coastal Carolina, winning by a score of 49-15. The Gamecocks showed off their balanced and up-tempo offense putting up 7 total touchdowns from 7 different position players.

The running back committee approach with Ty’Son Williams and Rico Dowdle worked wonders, as they combined for 187 yards and two touchdowns. The Gamecock defense, however, seems weaker than in years past, as they gave up 15 points to a clearly overmatched Coastal Carolina roster. In what should be a much tougher matchup against #3 Georgia next week, South Carolina will be challenged defensively and will have to rely on their offense to get the job done.

Much like the most of the rest of the SEC, the Texas A&M Aggies easily ran through a weaker opponent in Northwestern State 59-7. By the third quarter, the Aggies already held a 42-0 lead thanks to junior RB Trayveon Williams, who had 240 yards and three touchdowns. Sophomore QB Kellen Mond, now with a year at the collegiate level under his belt, seemed unfazed after offseason competition for the starting job. He threw for 3 touchdowns of his own, but the Aggies cannot be content about this game. In week two, they host #2 Clemson

In a game that seemed like an even matchup, Ole Miss showcased its talent.

Their offense looked very strong, carving up the Texas Tech defense with ease. Senior QB Jordan Ta’amu started the game off hot, throwing a 58 yard touchdown on just the second offensive play of the game. After Texas Tech tied it up, Jaylon Jones responded quickly, taking the ensuing kickoff to the house. If Ole Miss can continue to bolster their offensive weapons and carve up defenses like Texas Tech, they could be a dark horse candidate in the SEC.

Quarterback Drew Lock returns to Missouri with a vengeance after deciding not to enter the NFL draft. After bolstering the 8th ranked offense in college football last year, the Missouri Tigers held onto their two most important weapons, Lock and senior wide receiver Emanuel Hall. Once again, they could be one of the more elite offenses in the nation.

Both Lock and Hall had monster games in a 51-14 defeat of UT Martin. Lock threw for 289 yards and four touchdowns, while Hall had 171 receiving yards and two touchdowns of his own. This duo looks like a force to be reckoned with, but the problem in years past has not been on the offensive side of the ball. The Tigers defense needs plenty of improvement before they can be held in higher regards.

Despite a 35-20 win over Central Michigan, Kentucky seemed to be all over the place.

Early in the second quarter Kentucky was down 17-7, a start that cannot happen if Kentucky wants to compete against other SEC teams. In his first career start, sophomore QB Terry Wilson was pitiful, throwing 2 interceptions before getting hurt in the second quarter. Backup sophomore Gunnar Hoak took the reigns, but was not much better. Overall, the Wildcats didn’t look like a strong football team in any regard and probably won’t be able to compete against stronger competition. On the bright side, basketball season is just around the corner for Wildcat fans.

Vanderbilt entered this game with plenty of controversy surrounding their football stadium and donations, perhaps making this a statement game.

Vanderbilt went out (on their unrenovated field) and played a great game, defeating Middle Tennessee State 35-7. Senior QB Kyle Shurmur and the Commodore offense came out firing, scoring on the first possession of the game, and after that it was all Vanderbilt.

Defensively, the Commodores were stingy, recording six sacks and two turnovers, highlighted by Dayo Odeyingbo’s fumble recovery for a touchdown.

Overall, the Commodores played a great football game on both sides of the ball. They seem to have improved and MTSU head coach Rick Stockstill took note, noting that the Commodores are a “quality SEC team”. The words “quality” and “Vanderbilt football” don’t always go together, but head coach Derek Mason is actively trying to change the culture for the better and it seems to be working, but we’ll see just how long that lasts when they play tougher out of conference opponents in Nevada and Notre Dame.

Despite their 55-20 win over Eastern Illinois, the Arkansas Razorbacks didn’t turn many heads with their play.

They did have some success in the air, as their two quarterbacks combined for four touchdowns. That said, to perform consistently, they will need consistency on defense.

Scheduling tough, out of conference games is admirable. It’s a great way to increase national attention if you can pull out a victory, but Tennessee was not ready for their matchup with West Virginia.

The Volunteers were the only team in the SEC that lost, and the only team to score less than 35 points. Tennessee fell to #17 West Virginia at home 40-14. The Tennessee secondary was sliced up by quarterback Will Grier who threw for 429 yards and five touchdowns. Even after getting rid of head coach Butch Jones, new head coach and ex-Alabama defensive coordinator Jeremy Pruitt couldn’t help Tennessee get anything going. Expect a change at quarterback soon for Tennessee, as they slowly turn to Keller Chryst hoping he can turn things around for this team.