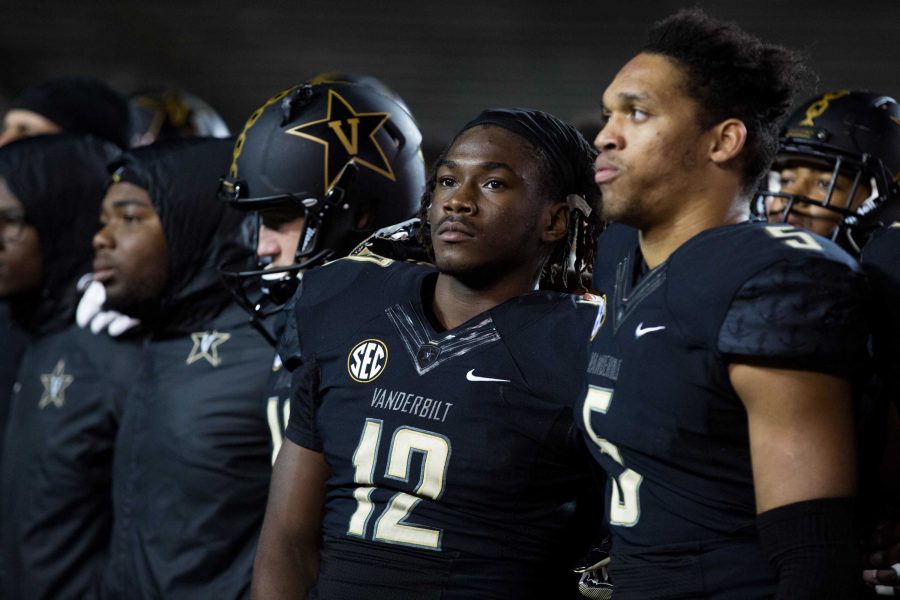 With their season opener against Middle Tennessee State on Saturday night, the Vanderbilt Commodores look forward to getting off to a strong start at home.

Despite their impressive 3-0 start last season, which included an exciting win at Vanderbilt Stadium against then 18th-ranked Kansas State, the Commodores struggled in SEC play, finishing the season 5-7 with just one in-conference win.

When asked about what could be carried over from last year’s season at Tuesday’s press conference, head coach Derek Mason said “It’s a new season. New opportunities. You can’t go forward looking at the rearview mirror.”

Mason’s outlook on the 2018 campaign is justified. With the return of starting quarterback Kyle Shurmur, there is plenty of reason for optimism. Shurmur, entering his senior season, is a three-year starter, providing an extent of experience and stability at quarterback that is a rarity in college football.

Presumptive starting running back Khari Blasingame spoke on Shurmur’s power in the huddle.

“He’s like having [offensive coordinator Andy] Ludwig on the field,” Blasingame said. “He knows exactly what we want to do in situations and that’s a big source of confidence for everyone on the offense.”

Shurmur will look to build on last year’s impressive season in which he commanded the SEC’s fourth-strongest passing offense. Individually, a strong season from Shurmur would allow him to rewrite the Vanderbilt history books, as he is within 3,000 passing yards of Jay Cutler’s record as all-time leading passer. The offense will especially be reliant on Shurmur, as the graduation of all-time leading rusher Ralph Webb has left a large void in the running game.

While Shurmur will provide stability on the field, Saturday night will be the first opportunity to see an overhauled coaching staff. During the offseason, Mason made four new additions to his staff: Jason Tarver (Defensive Coordinator), Shawn Mennenga (Special Teams Coordinator), Aaron Moorehead (Wide Receivers coach) and Terrence Brown (Cornerbacks Coach). Tarver’s hire is especially intruiging, as it spells the playcalling duties over from Mason to Tarver.

Mason said that this move “Opens him for business,” granting him more flexibility to spread his attention across all three phases of his team.

“I’m making my own notes so that I can meet with my coordinators during the week and give them a fresh take on what I have seen gameplan wise,” Mason said.

Tarver will look to turn around a defense that struggled last year, giving up over 30 points per game during conference play.

Mason enters his fifth season with limited expectations—numerous outlets have projected Vanderbilt to finish last in the SEC East—but nonetheless has a team that could emerge as a surprise success story. Behind the Georgia Bulldogs, who are the clear cut favorites to win the SEC East, there is a wide-open race for second place.

While the SEC is the nation’s most difficult conference, at a certain point Mason must show some improvement. He sounded excited about the team’s progression under his watch.

“It’s been fun to really see this team from the day that I got here look different, sound different, act different, play different,” he said.

Despite his optimism, eventually the difference that needs to be apparent is in the Win-Loss column. With an 18-31 record in his first four seasons, including just one bowl appearance, it is not outlandish to predict that another poor season could heat up Mason’s seat a little bit.

A bowl game could be an attainable goal, but according to starting Senior safety LaDarius Wiley, the team has a narrower mindset.