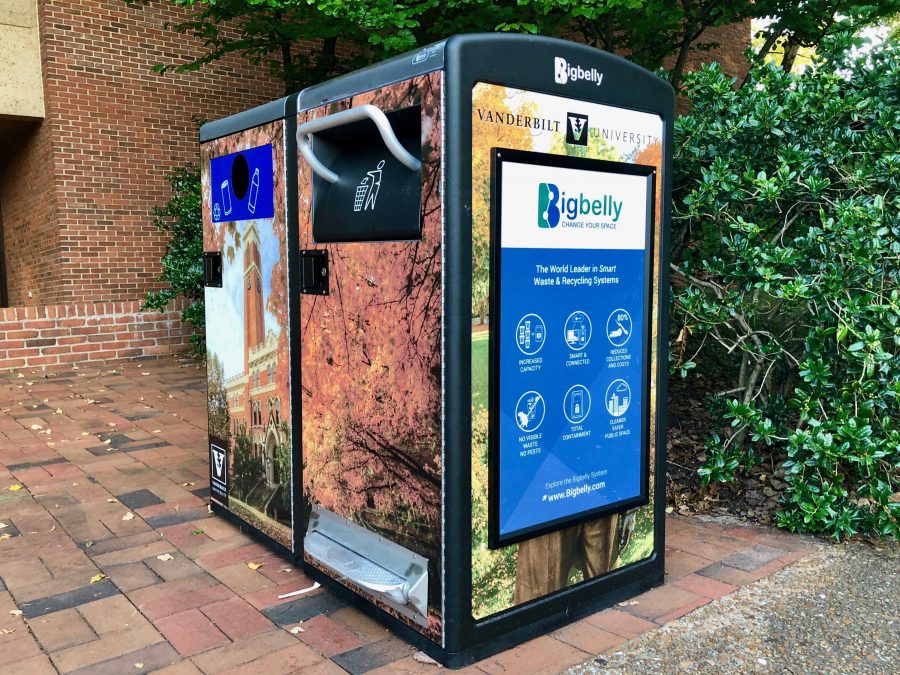 The collection bins are made by Bigbelly, a Massachusetts-based company that aims to transform the waste industry and promote cleaner and more efficient trash collection. Their trash and recycling cans are sensor-equipped to notify the Grounds Team when the bins are nearing capacity and are ready for pick-up. They also compact waste in order to maximize the volume of each load. Each set of bins, which includes a trash and recycling bin, is powered by a solar panel on top.

Vanderbilt decided to introduce this technology to streamline waste pick-up, Grounds Assistant Manager Ryan Storey said. The Grounds Team has to check standard bins twice a day, but the only have to attend to Bigbelly bins when they get a system notification on their phones. This typically averages to once a day or even every other day, depending on the bin.

“It’s a lot of manpower savings that can go towards something else on campus,” Storey said.

There are currently eight Bigbelly bins on campus. Seven are located around Rand and Sarratt. The eighth bin is portable and is currently located at the Hank Ingram Vandy Van stop.

Plant Operations is likely to expand implementation of the Bigbelly bins at more places on campus, Assistant Manager of Operations Matthew Buckley said. The team is currently assessing the possibility of introducing them to the Medical Center Plaza due to the high volume of people.

“We’re focusing on high traffic, high volume areas where it makes the most sense financially and also from a capacity standpoint” Buckley said. “We’re not just sitting them places where they’re not going to be utilized to the maximum benefit of everybody.”

Vanderbilt Plant Operations has been talking with Bigbelly for a few years, and the implementation of the cans came together for this year with the introduction of the lease program. Initially, the company only allowed purchases, but Buckley said that the lease program made more financial sense. The current machines are under a five year contract in which Vanderbilt pays monthly fees.

The bins are also a step-up from a typical waste bin. They have twice the capacity, as well as have a foot pedal to provide users hands-free use. Further, the bins have customized wrappings and message panels on the side.

The Grounds Team will be working with the Communications Office to facilitate the use of the additional display space. Storey said that the hope is to limit the amount of stickers and advertisements on trees.

The solar-powered smart waste collection bins add to a number of other solar-powered technologies on campus, including the use of solar panels on the roof of the Currey Tennis Center to heat the water of the building and generate electricity.

While the new-and-improved waste bins improve sustainability, increase efficiency, and provide new prospects for students, as of now, Buckley noted that they won’t be the new norm for every trash can.

“We’re looking at where it makes the most sense,” Buckley said. “We’re not going to replace every trash can on campus with one.”