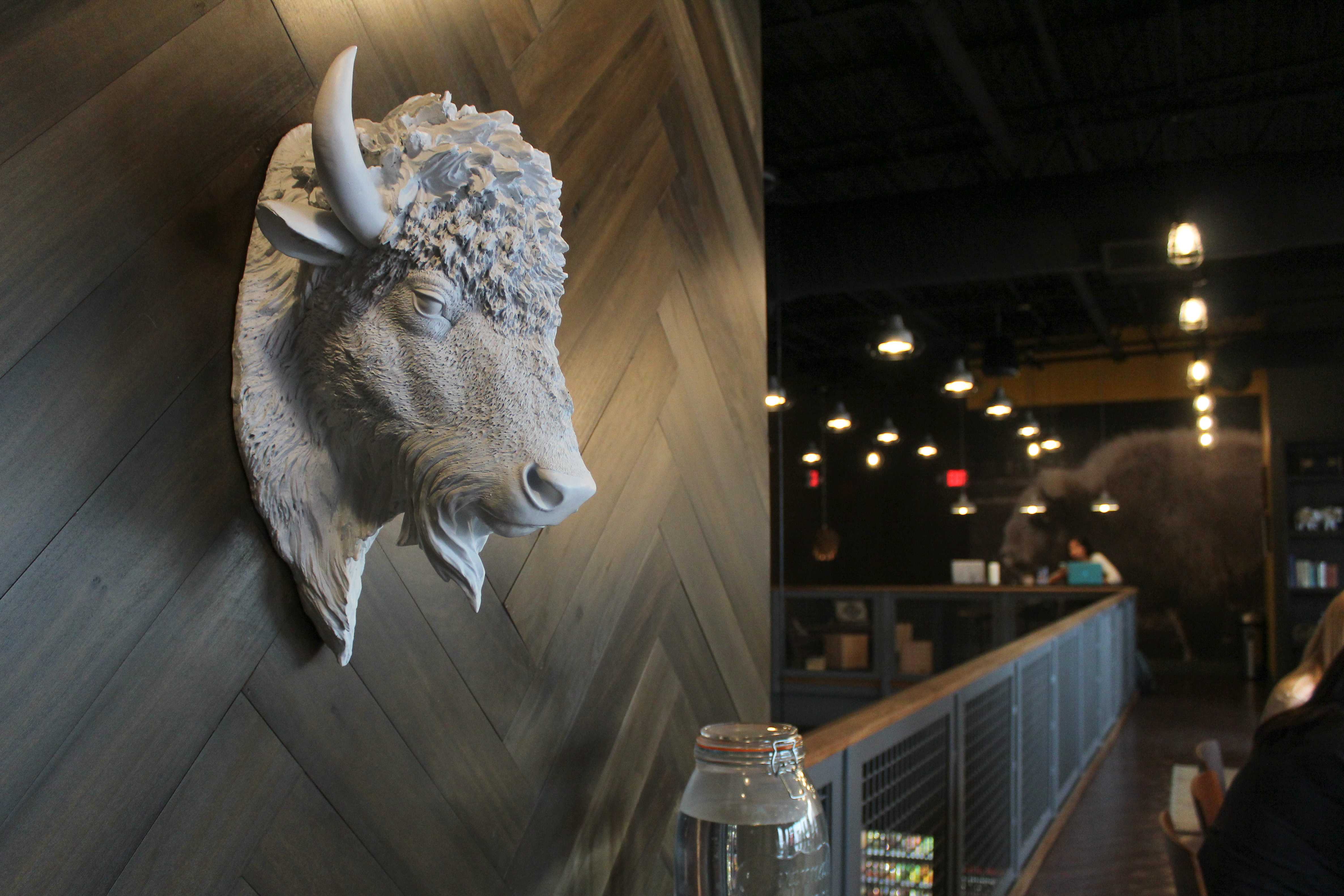 Friends and fellow coffee fanatics Alexa and Hannah review Nashville’s new and lesser-known coffee shops in their column “Alexa, Hannah and Joe.” Alexa writes, and Hannah is behind the camera. Check back each Tuesday to find your new favorite cup of joe!

If you’ve been to the 12 South neighborhood recently, you undoubtedly noticed one of its newest installments: the behemoth brown building that is White Bison Coffee.

The two-level coffee shop opened on Aug. 7 and is located between Portland Brew and Minor’s Jewelry. Its first location opened in the Nations Neighborhood in Nov. 2017, and it is one of nine locations of the expanding Middle Tennessee coffee franchise.

Upon walking inside, you will immediately notice that White Bison Coffee shares its space and is an extension of Twice Daily, a small convenience shop with a selection of snacks and beverages located on the right side of the first level. The Twice Daily section resembles an upscale 7-Eleven and feels slightly out-of-place in a coffee shop. However, it serves as the perfect pitstop for the hungry bachelorette party member weary from an afternoon of scouring the boutiques and stores along 12 South.

The coffee bar is on the left hand side of the first level. There, you can order a variety of specialty drinks, including coffee, espresso drinks, teas and frappes, as well as a small assortment of breakfast items from what closely resembles a standard Starbucks store. 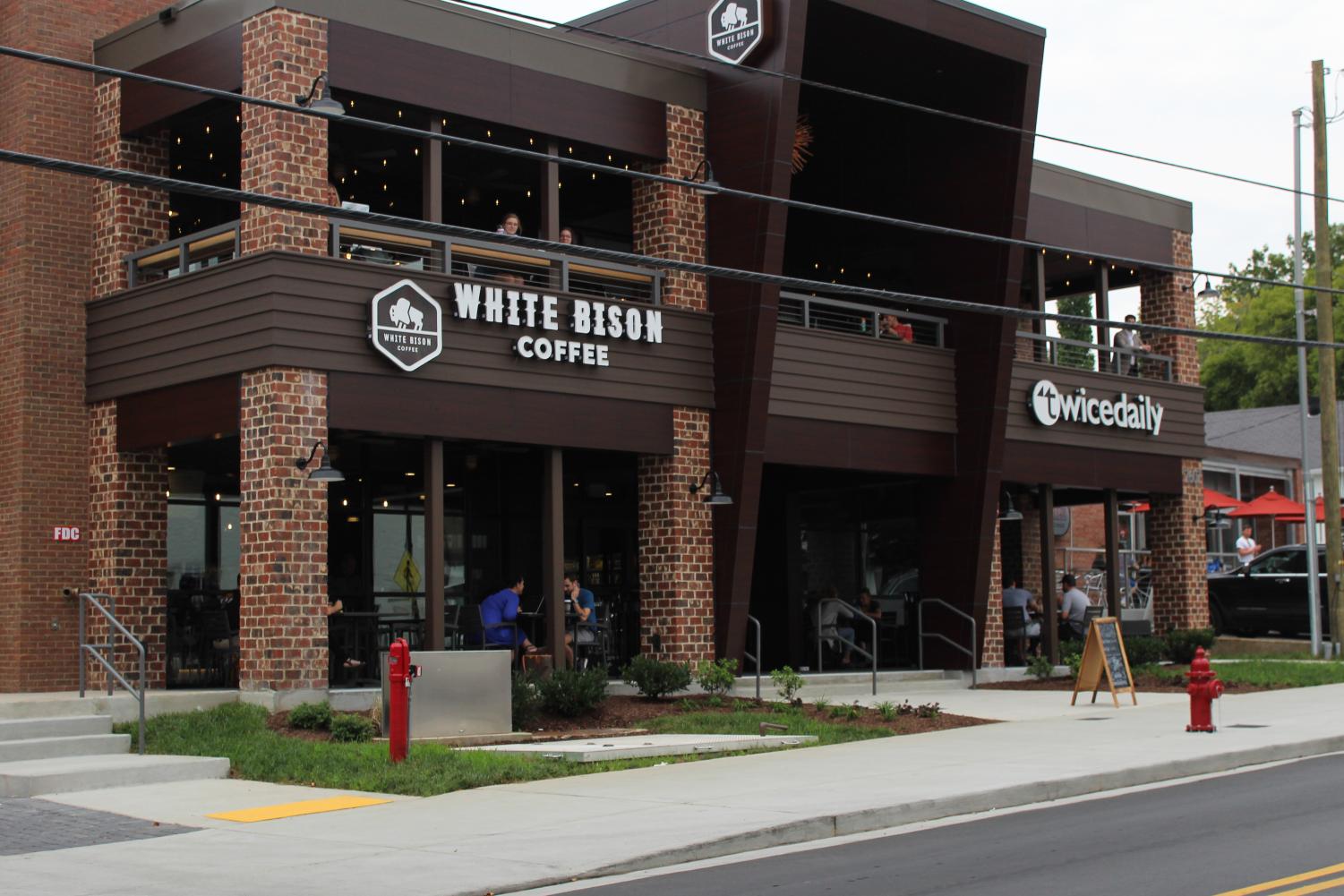 The interior of White Bison feels new yet cozy. A mixture of earth tones, relying heavily on deep browns with details in whites and beiges, creates this cozy atmosphere. The decor is immaculate and relies heavily on contrasting textures and coordinating tones.

Seating on the first level is limited to barstools, but the second level features a mix of standard tables and chairs, deep couches, armchairs and a few stools, which separate the space into different areas. Half of the second level is indoors, while the outside patio makes up the other half of the upstairs square footage. 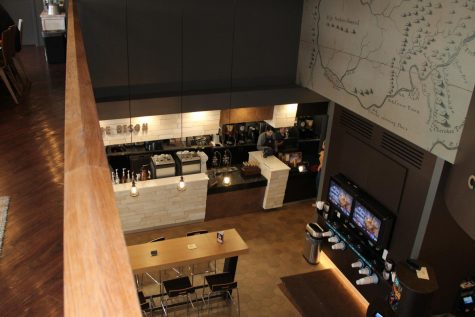 On a cloudy and muggy Friday afternoon, the patio offered a place to sit and work above the traffic and crowds of 12 South. Outdoor outlets are convenient and the decor creates a cozy atmosphere, but the noise of the street is inescapable. While this outdoor space may be impossible to utilize in winter weather, lounging around in mid-August was bearable. One does have to wonder if this outdoor space can be utilized at all during the winter months, though. 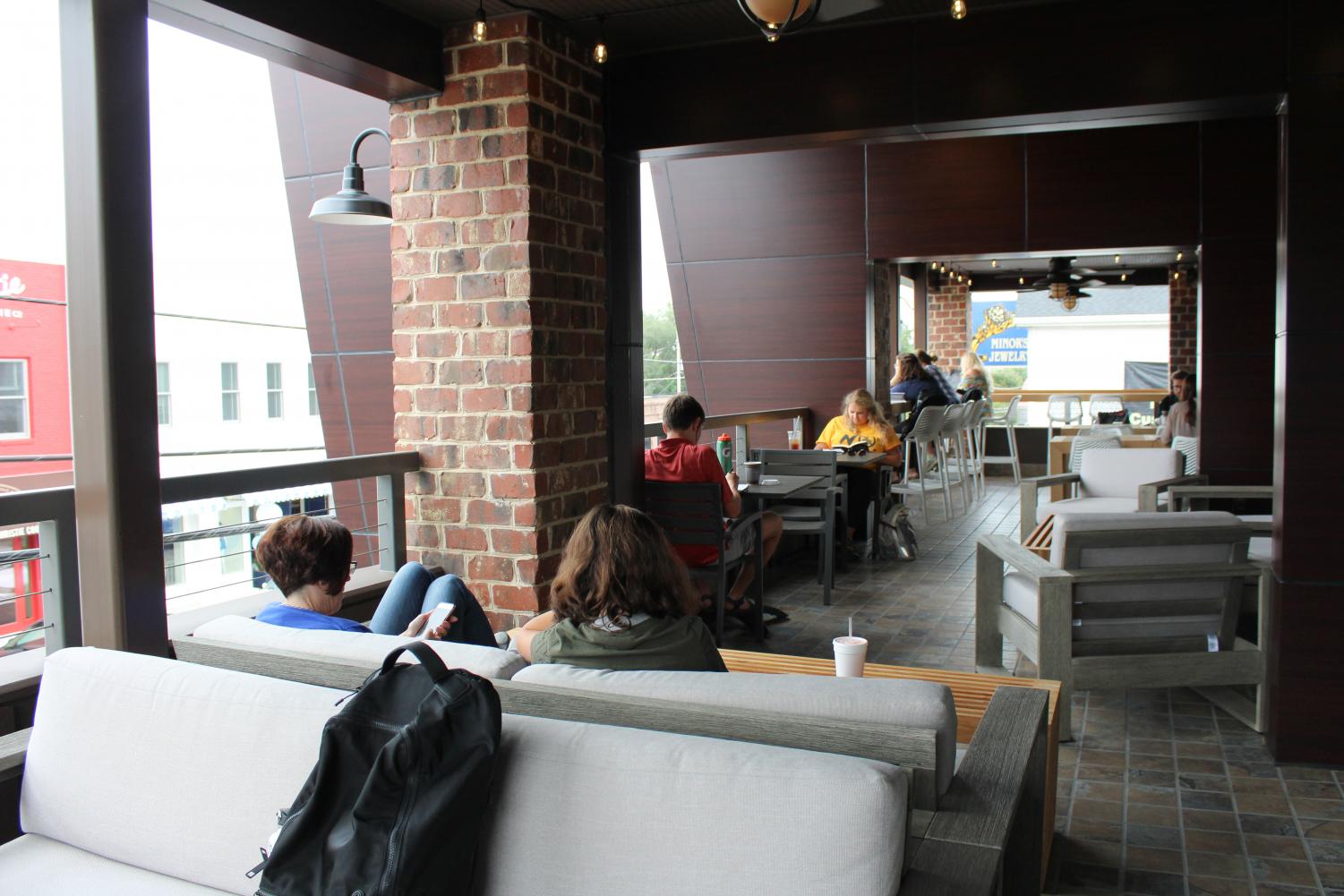 Alexa’s order: I ordered the signature drink, the White Bison Mocha, which features white chocolate. I was disappointed that my drink came in a to-go cup rather than a mug. This was pretty standard as far as mochas go—it was very sweet with little caffeine. Starbucks offers very similar options, and I expected a more unique drink for the price at such an aesthetic coffee shop. 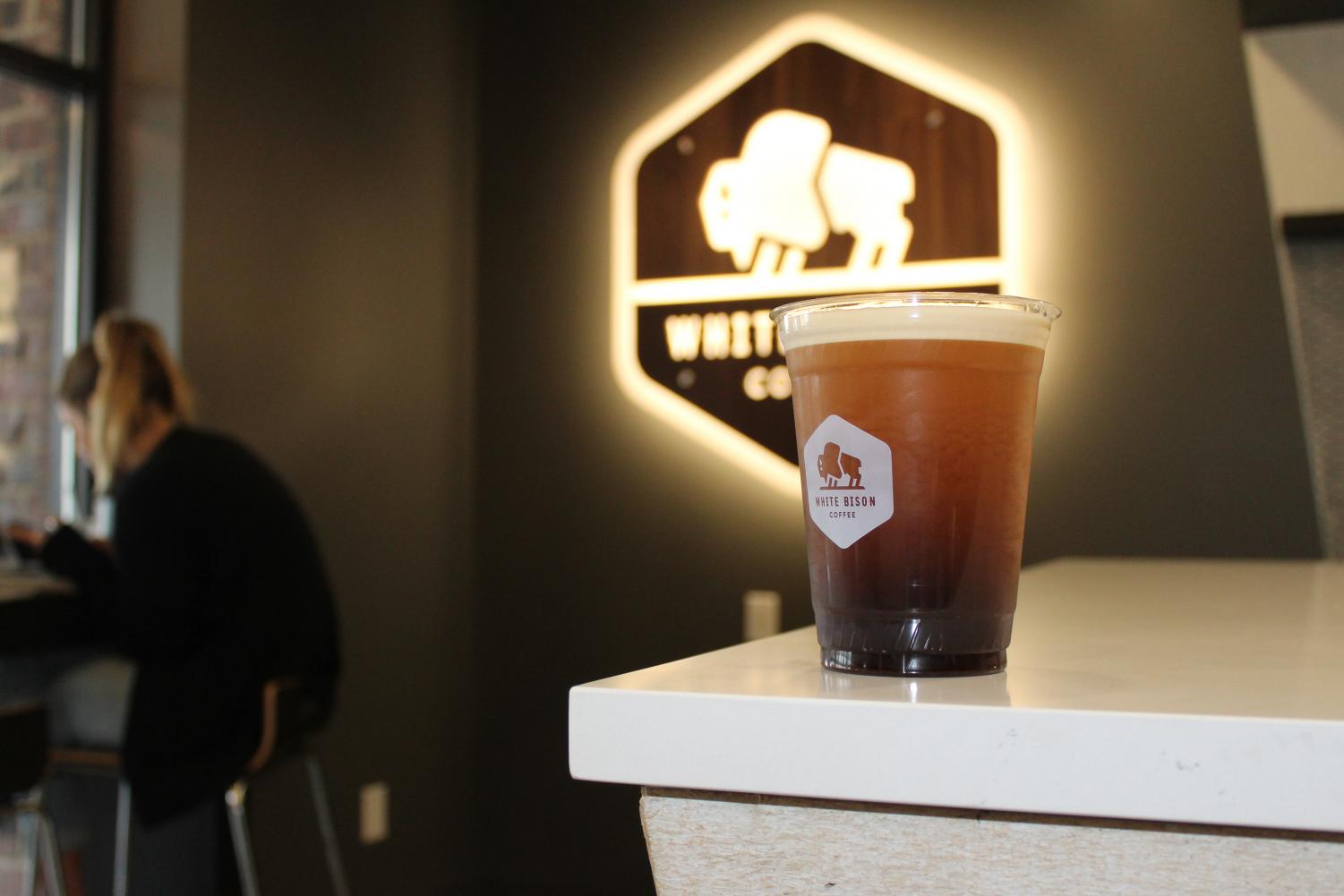 Hannah’s order: I had the Nitrogen Cold Brew Coffee. Although I typically enjoy this spin on black coffee, with each sip my optimism faded and was replaced by the almost metallic flavor of my visually appealing but sub-par drink. After the classic creamy top layer, it tasted less and less like coffee and instead simply provided a jolt of caffeine—I could only finish about half. Like Alexa, I expected something more refined and was left disappointed. 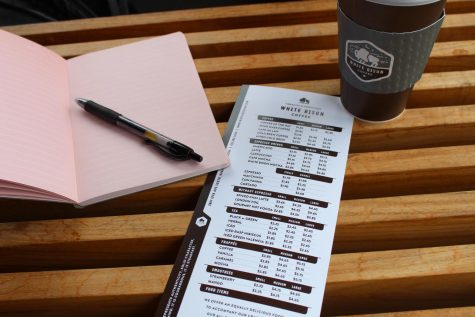 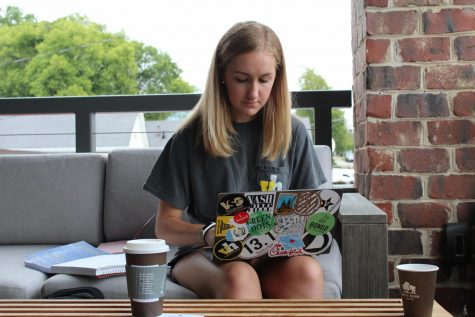 If you can get past the 7-Eleven meets Starbucks vibe of the first level, White Bison Coffee could be a great study spot if you want to get off campus, but the line at nearby Frothy Monkey is out the door. However, you’ll pay prices similar to what you would at the Starbucks on 21st.

And we can’t forget the elephant (or shall we say, bison) in the room: Portland Brew now sits in the shadow of White Bison Coffee. It would be a shame if this local coffee shop suffered because of a corporate coffee shop that resembles an upscale gas station.

White Bison Coffee is worth a try, even if you just want to experience what it is like to order a medium vanilla latte in what some have said feels like a Munchie Mart. Maybe this is what a Munchie Mart in E. Bronson Ingram would be like? 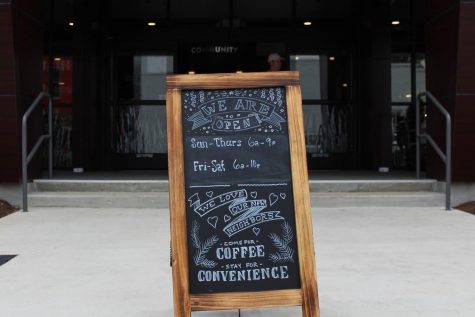