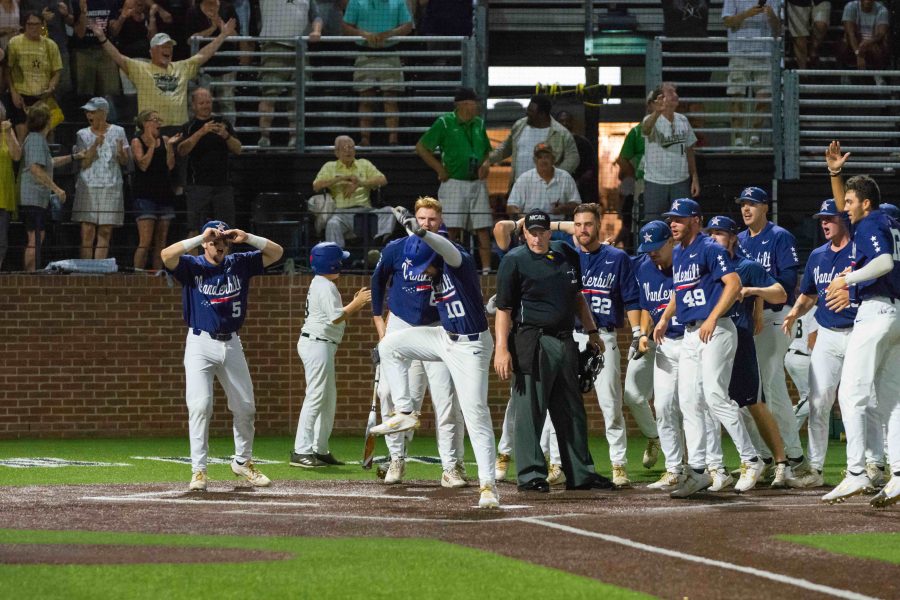 What happens when an unstoppable force meets an immovable object?

That’s supposed to be a paradox, but it appears the Mississippi State Bulldogs and Vanderbilt Commodores answered the question quite thoroughly over the last 53 hours.

It was an epic series, and it was a shame someone had to lose it. That losing team was Vanderbilt as they couldn’t overcome a 10-6 deficit in extra innings.

When Mississippi State took a three-run lead in the top of the ninth, it looked as if they were the team destined for the miracle season. After Ethan Paul tied the game in the ninth inning on a two-run home run, Vanderbilt seemed like the team of destiny.

Two magical, unexpected runs collided. And they produced a supernova that might never be matched in college baseball, or in any level of baseball.

“You play in these environments right here, their crowd, our crowd, these Super Regionals, they can play professional baseball, but they won’t play in meaningful games like this,” Vanderbilt head coach Tim Corbin said. “Unless they go to the World Series themselves at the next level, these games right here have a lot of meaning to them. They’re relevant, they’re relevant to a lot of people. There’s deep meaning to them. That’s why people care so much about what the kids are doing and the kids care so much.

“I just wish they would realize that when they look at college baseball and understand that they won’t get this again. This won’t happen again. You go off and play professional baseball, you think that’s something special? Not like this.”

It will certainly be hard for Vanderbilt’s players to appreciate what happened this weekend right now. That’s understandable. They fought harder than anyone expected only to come up short. By the end of the series, no deficit seemed insurmountable. After all, the Commodores had just walked off on a ninth-inning home run on Saturday and tied Sunday’s game with two ninth-inning homers.

That’s the beauty and the tragedy of sports: one team has to have an L next to its name, the other team gets a W.

“Even after Game One, there was constant talk within the team between ourselves about seeing ourselves doing this and winning the whole thing,” an emotional Paul said. “From day one, before the season even started, we just had a feeling between each other that we were just a mentally tough team. We just didn’t think that we’d ever go down this way. We always believed in ourselves.”

Corbin has told a story before of Vanderbilt alum David Price’s journey from giving up the go-ahead home run in the 2007 Regional Final to helping the Tampa Bay Rays clinch a berth in the 2008 World Series. When Corbin spoke to Price after the regional loss, he said that the game would come around to him someday.

Fast forward 11 years, and Vanderbilt’s young core of players finds itself in Price’s shoes. Despite giving everything they had to this game of baseball, all they got was heartbreak in return. Some might say it’s not fair. Some might not be able to see past what happened on the turf in Nashville over this epic weekend right now.

But, when at least eight of these nine Vanderbilt starters are battling for a spot in Omaha in about 365 days, they’ll be thankful for what they went through between June 8 and June 11, 2018.

“It’s just right now, I can’t put words together for them right now,” Corbin said. “It’s just very difficult from an emotional standpoint. When you play a game like this, you get to the edge and you can feel it and sometimes when you feel it, you squeeze a little bit too hard and I think what they will do as they reflect upon that is they’ll understand how routines and breathing and controlling adrenaline is so important in sport when you play a tight game. That was kind of the case tonight, we did in certain circumstances, in other circumstances we did not.”

The person who knows that more than anyone is the almost-hero Paul. Between the high of his home run in the ninth and the low of the final out in the 11th, Paul might have gained more wisdom in an hour’s time than most would gain in a lifetime.

No matter what the future holds for him and this team, these kids will be better because they played in what will be remembered as one of the most improbable, sensational and heart-wrenching weekends of baseball in the history of the game.

“It’s just going to build the team going forward,” Paul said. “It’s the same thing, experience is like that. They go a long way in the future, so it’s going to be a positive thing in the end for us.”