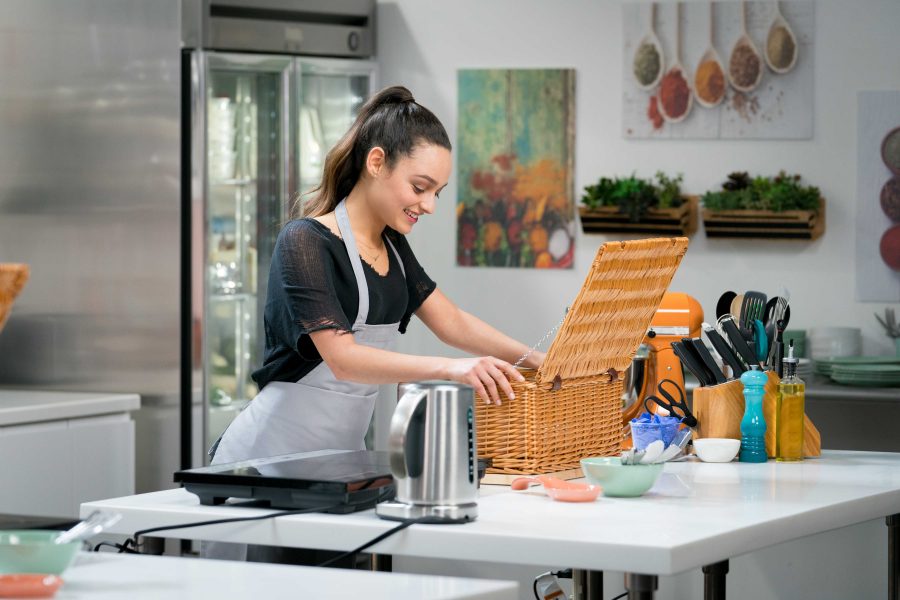 Vanderbilt junior Sloane Chmara was selected to compete on Food Network’s new Snapchat cooking show, ChoppedU. Her drive for entrepreneurship took off through Sloane’s Sweets & Treats, a homemade dessert business she began in 2013. She has now expanded into the health food realm with her brand Kale & Kravings (@kaleandkravings on Instagram).

Chmara hopes to continue her education by pursuing a master’s degree in nutrition and learning about other wellness practices. The Hustler was able to hear via email about Chmara’s experience with ChoppedU while she studies abroad in Australia.

Vanderbilt Hustler: Can you talk a little bit about what ChoppedU is for those who are not familiar with it?

Sloane Chmara: Chopped U is the Food Network’s brand new Snapchat cooking competition hosted and judged by Lazarus Lynch. You can find it in the Discover page on Snapchat and online eventually. The first season includes six episodes featuring young chefs competing head to head, and my episode on April 22 was the finale. In each episode, two chefs get a mystery basket with four ingredients that they must use in a dish that they have 30 minutes to prepare, very much like the regular Chopped show on the Food Network. This is the first season of the show, and I’m so honored that I got to be a part of such a new and exciting project.

VH: How did the process of getting featured on ChoppedU work?

SC: So the way I ended up on Chopped U is actually kind of a crazy story, and it was all very serendipitous. One of my dreams is to have my own cooking/talk TV show, and I’ve worked on set at Tastemade and my own show, The Vandy Cookbook. While I was home for winter break in January, one of my mom’s friends tagged her in a Facebook post written by a casting director advertising for the show. Not really knowing what it was all about, my mom sent me a screenshot of the message, and I instantly knew something amazing was about to happen. I got in touch with the casting director a couple of hours later, and she asked me to throw together an audition tape. It all happened so fast! Within 24 hours, my mom and I—she was honestly such a rock star for helping me—filmed a short video to send to the agency. A week later, I got a call that I got on the show. Filming was in Los Angeles, which is where I live, in late January, and I happened to be home because I was preparing to study abroad in Sydney, Australia, where I am right now, and the program doesn’t start until mid-February…it was truly all meant to be.

VH: How do you think the platform of Snapchat is helpful or challenging to the show?

SC: I think that having Chopped U on Snapchat is a good move for the Food Network. The episodes are short, quirky, fun and super entertaining. Because the contestants are younger, using a social media platform dominated by a younger demographic makes a lot of sense. Also, it’s evident that people are switching to using Netflix, Hulu and other streaming apps as their primary source of television entertainment instead of regular cable TV. Snapchat is a great way to spread content that is easily consumable by a large number of people, so I think they’ll have a lot of success with the show. My only problem is that my grandparents won’t be able to watch it on the app and will have to wait until the web links come out.

VH: What was the highlight of your ChoppedU experience?

SC: Honestly, being on set doing what I absolutely love was the best feeling ever, and I left the studio that day exhausted but absolutely high on life and truly inspired. I love being in front of a camera—I’ve been dancing, singing, and acting for most of my life, and cooking will always be one of my number one passions. I also loved being surrounded by so many talented and creative individuals. I really believe that surrounding yourself with like-minded people who inspire and push you outside of your comfort zone is one of the best ways to learn and grow as a person. I am constantly looking for ways to expand my knowledge, perspectives and experiences, and being on ChoppedU really ticked all of those boxes.

VH: What would you like aspiring foodies to know?

SC: Play, experiment and trust yourself. I always start out with recipes and then end up adding my own twists. Most of the time it works, but sometimes I make something that simply does not taste good. It’s during those moments that I learn the most though. If you love food and want to get more into cooking, just get in the kitchen. Find a cookbook or even some YouTube videos and start playing. I also recommend learning more about your ingredients – farmer’s markets can be great places to explore. If you ever need someone to wander around a market or grocery store with you, let me know because I’m your girl.