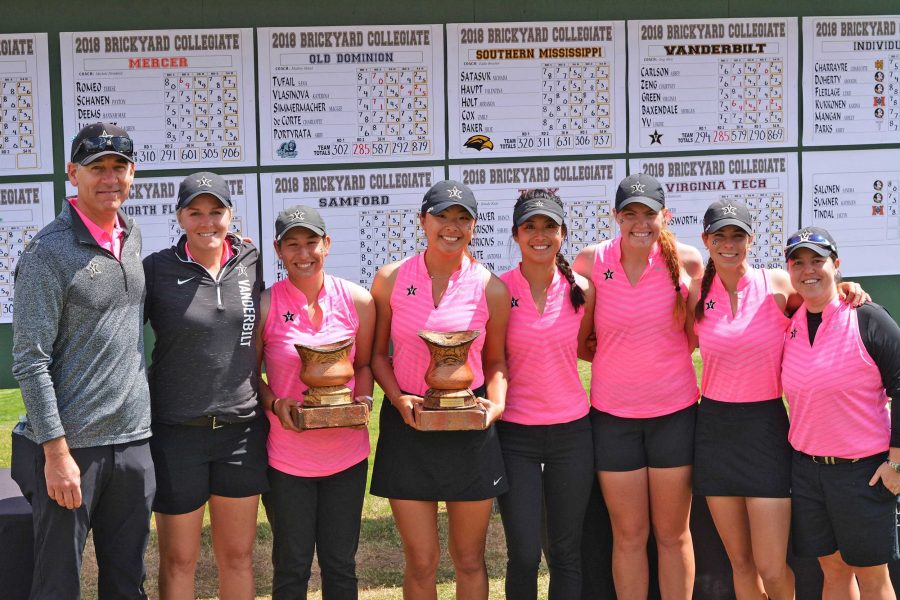 The SEC Women’s Golf Championships begins this Wednesday in Birmingham, and the Commodores have some crucial momentum after winning the Brickyard Collegiate last week.

“I think anytime you’ve got momentum on your side, it just gives you a chance to go and play really well,” said coach Greg Allen.

Vanderbilt, which is ranked No. 25 in nation, took home both team and individual honors, as freshman Morgan Baxendale placed first out of 78 golfers in the field. Baxendale shot a 3-under 213 over three rounds and won SEC Freshman of the Week honors for her performance.

“That girl doesn’t slow down, doesn’t stop,” said Allen of Baxendale. “And she’s one of the hardest workers I’ve ever been around in my 20 years of coaching.”

Sophomore Abbey Carlson and freshman Louise Yu tied for fourth place at 3-over 219.

Even with an impressive showing at the Brickyard, Allen thinks this team still has room to get better and reach their potential.

Carlson leads the team with a stroke average of 73.04 and Baxendale is close behind with an average of 73.33. Louise Yu’s average of 73.52 and Courtney Zeng’s 73.54 average are also remarkable.

The sophomore has improved the most in the past year, taking almost a stroke and a half off her average.

“Her ball striking is unbelievable,” Allen said of Carlson. “But I would say the biggest thing for Abbey is that her chipping has improved.”

The SEC Championships have a different format this year. In addition to the traditional 54 holes of stroke play, the conference championship will now feature a second round in which the top eight teams from stroke play compete in match play for up to three additional rounds.

Allen said, “I’m excited about the possibility of match play. It mirrors the national championship now, and it mirrors what the guys do.”

While the team has not played in match play in any tournaments this season, Allen emphasized that they play matches in practice, and match play is very common on the summer amateur tours.

Greystone Golf and Country Club hosts the tournament on its Legacy course.

Carlson, who played the course at last year’s SEC Championships, said, “it’s a course that all around tests your game, but you’re rewarded for good shots.”

The competition will be tough, as Arkansas and Alabama are both top-five teams and South Carolina, Florida, and Auburn are also fellow top-25 teams.

This team’s chemistry could play a factor in keeping the Commodores loose in a competitive and pressure-packed tournament.

“This is probably one of the best teams I’ve had in terms of chemistry in a really long time,” said Allen, who has coached 11 seasons at Vanderbilt after leading Arizona’s squad for seven years.

Carlson said, “Our team just all around gels really well. Last tournament, we all got ice cream after a round and just sat and talked in the van for 20 minutes.”