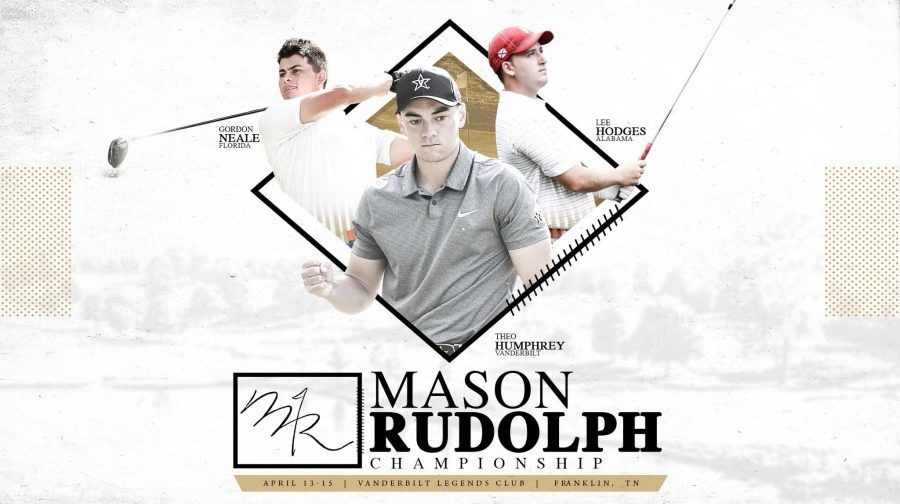 After winning two major tournaments and several individual honors, the Vanderbilt Men’s Golf team comes home this weekend to play the Mason Rudolph Championship at the Vanderbilt Legends Club in Franklin in what could become a triumph parade of sorts in their last regular season outing.

As of the publication of this article, Vanderbilt Men’s golf ranks 4th in the nation according to the NCAA, only behind Georgia Tech, Texas A&M, and Oklahoma St. With the exception of California, it’s worth noting that all of the schools in the top 10 are in the Southeast because Vanderbilt has faced most of them already this season.

Whether you can’t make the drive out to Franklin this weekend or simply want more golf, fear not: Vanderbilt is likely to get a nearby Regional location during the D1 Men’s Golf Selection Show (May 2nd, 5:30 PM on the Golf Channel.) But until then, here’s a quick recap of the season so far and a primer of what to watch this weekend.
“The Alligator Bit My Hand Off!”
The Spring season started out with some off-course excitement when a committee of professionals associated with college golf named Will Gordon, Theo Humphrey, and Patrick Martin to the Ben Hogan Award Watch List, the first step in a process that evaluates a player’s performance from June-May after their success in the fall season. (The list of ten semifinalists will be announced on April 11.)

Individual honors aside, Vanderbilt had work to do as a team going in the SunTrust Gator Invitational in Gainesville, Florida. After jumping to the lead on the first day of competition, the Commodores held on to a -18 team victory, which was 8 strokes better than second-place Florida, the tournament host. Gordon and John Augustein tied for fourth, with Humphrey finishing 8th overall—suprising, considering that Humphrey is the consensus star of the Vanderbilt squad this year, but still not far behind.
Spring Breakers
Like most spring breakers who visit the Mexican seaside resort town, the Vanderbilt Men’s Golf team hoped that the losses that happened in Cabo would stay in Cabo.

To be fair, the Querencia Cabo Intercollegiate tournament was practically an early season simulation for later rounds of the NCAA Tournament with all the top programs in attendance. In the proud Vanderbilt tradition of playing difficult non-conference games early in the season (seriously, compare the schedules of Baseball, Golf, and both Men’s and Women’s Basketball and you’ll see it), the Commodores were southbound for a real test. Vanderbilt finished 11th as a team after the first day of competition with Humphrey tied for third place. They were still 11th after the following day, though Humphrey moved up to second place but still trailed the leaders by three shots.

Humphrey would finish third, but the Vanderbilt team would improve their own fortunes to place eigth in a tournament that went down to the wire between Cal Berkeley and Oklahoma St. with the Cowboys winning it. Cooper Sears, the redshirt freshman playing in the contested sixth slot, wavered with the high scores of 80 and 81 over the first two days, respectively, but rallied on Sunday to post a 76. Gordon and Augustein both contributed scores of 69 in the final round, which was critical in the Commodores’ rally.

Though echoing the team’s disappointment, Limbaugh said he was impressed by the team’s maturity when it came to making up for lost ground. He also memorably said in an interview with VUCommodores.com “We have learned that our good is pretty good and our average has not been good enough. The biggest challenge for any team is to continue to own who they are and their results.”
(No More) Statesboro Blues
After Cabo, the Commodores would fly northward to the Forrest Heights CC in Statesboro, GA for the Schenkle Invitational. Vanderbilt finished third in the 49-year-old tournament last season, but forecasts were optimistic for an even more favorable finish given the Vanderbilt squad was without their top player last year, All-American Matthias Schwab, who was off winning awards at the Palmer Cup in England at the time. Coach Limbaugh said outright the Statesboro tournament was a team favorite when he said, “We love this event because of how the community wraps their arms around us and makes it so special for all of us.”

That mutual affinity shined ever so brightly that weekend for the “golden golfers.” Vanderbilt held a commanding nine-shot team lead over second-place Kentucky after the first round of play. Vanderbilt clearly fed off of the individual lead of Humphrey. Surprisingly, the senior, whose chipping is normally the cornerstone of his game, struggled from 90 feet-and-in throughout the tournament. Ultimately, he was able to retain his composure enough to hold on to a sweet score of 66.

Not much changed during the second and final round of play that Sunday, as the Commodores cruised to victory as a team with an eight-shot, 29-under par victory over tournament hosts Georgia Southern.

Freshman Harrison Ott, who is the Commodore’s sixth man (a position that competes individually and does not contribute to the team score) at the moment, shot a respectable 75 on the final day after struggling on Saturday. Vanderbilt’s top three finishers, who all were in the tournament’s top 20, were Augenstein (T-17th, -2), Gordon (T-5, -9) and the individual tournament champion Humphrey with an impressive, -29. The individual race was far closer than Vanderbilt’s team landslide, with Humphrey barely beating out contenders from NC State and Georgia Southern by two strokes. Nevertheless, the senior would be named co-SEC Player of the Week for his performance.

After what seemed to be a concise, critical look at the team’s mid-season makeup in the post-Cabo conference, Coach Limbaugh was unafraid to sing the player’s well-earned praises after Statesboro.

“I am so proud of this group,” Limbaugh said, “and how they responded to the challenge this week. I want the guys to enjoy this because they earned it.”

In the manner of a consummate coach’s coach, Limbaugh soon turned his focus forward, adding “The challenge is for us to continue to have a group mentality so we can have a group identity and I want us to embrace that.”

The phrase doesn’t exactly affix itself to a bumper sticker like Form Follows Function, but it’ll do for the rest of the season. But what does it mean for the golfers? Gordon thinks that every member of this particular squad, even more so than in years past, is called on to contribute consistently good outings.

“Mattias (Schwab) isn’t on the team anymore, but I think this year’s team can still be excellent. Theo’s been great to look up to,” Gordon added.

After helping build up a program, Humphrey was able to look at the matter from the atmospheric perspective of a senior, saying, “Sure, every team is going to be a little different, but I think this team is really similar to the one we had last year, in a positive way.”

On leadership, Humphrey added that, “As a senior, I feel that I have to be more careful about what I say because people are listening or, I should say, I hope they are. Because I know that’s what I wish I had done more of as a freshman—I mean I listened a lot, but coming in I thought I had a lot more figured out than I actually did.”

Limbaugh, who is in his sixth season as Vanderbilt’s head coach after a stint as an assistant at Alabama, unsurprisingly also emphasized this season as the continuation of a longer process.

Although not necessarily done with intent and certainly biased towards the magnetic poles of amateur golf, the geographical diversity of the Men’s Golf team is fairly representative of Vanderbilt’s student body as a whole. Gordon hails from Davidson, NC, while Humphrey, a Phil Mickleson fan, is from Connecticut (like many Vanderbilt students, he says ‘New York City suburbs’ to save time.)

But getting back to the point, former basketball coach Kevin Stallings was a master recruiter, and yet Vanderbilt struggled to make runs in the NCAA tournament for fifteen years. While Limbaugh will talk about a “day-to-day mentality” like most coaches, it’s evident he actually believes in it.

Take this quote from Limbaugh after Vanderbilt struggled on Friday in Cabo: “Tomorrow is important for us because it affects where we want to go as a team.”

Sports are, or at least should be, about the actions of the players on the field, which can lead to some pretty formulaic press conferences. But sometimes, a quote recorded by a camera can speak volumes about the inner workings of a program playing in front of it, which in the case of the most successful ones, is a carefully cultivated environment.

The quote seems incredibly vague at first glance, and that’s because it is, but there lies the importance. Where the team is going doesn’t refer to the rest of the Cabo weekend, or even the rest of the season, but to this grander, multi-year strategy of achievement –whatever that might mean on a group or individual level—that everyone on the team seems to be articulating in their own words.

The Commodores’ success on the links suggests that Limbaugh doesn’t give himself, or his staff, enough credit when it comes to the value that they add to each day in that “day-to-day” approach, especially when one looks at them in the context of years.

Limbaugh, alongside Vice Chancellor David Williams, has presided over the construction of a new state-of-the-art clubhouse for both the men’s and women’s golf programs, which puts both Vanderbilt and the Legends course on the map of amateur golf. Additionally, Vanderbilt has scored sposnorships from major golf brands like Nike, Bridgestone and PXG, though players are granted a degree of leeway when selecting what goes into their golf bags.

A key piece to the chemistry puzzle came this off-season when Limbaugh named Gator Todd (yes, that might be the best golf name ever) as assistant coach. Todd, who was an Alabama golfer during Limbaugh’s tenure there and coached on the competitive courses of Wisconsin with Marquette University, has been a fine addition to Vanderbilt’s coaching tree for his golf know-how as well as sharing the experience of golfing under Limbaugh. Todd stepped in to fill the position left vacant following Dusty Smith’s departure for the head coaching job at Mississippi State.
Run Run Rudolph
The Mason Rudolph Championship will take place this weekend with the matches lasting all day Friday, Saturday, and Sunday. The tournament, which bears the name of a legendary golf coach who worked with Vanderbilt players from 1992-2011, will take place at the Vanderbilt Legends Club in Franklin, TN, which is about 30 minutes away from campus if you take the highway.

Though there are storms in the forecast, skies should be clear enough to make for pleasant spring days with temperatures in the low 70s.

“We finished 3rd last year, and won the whole thing my freshman and sophomore years,” Humphrey said, “so it should be a good opportunity for the team to show what we’re truly capable of.”