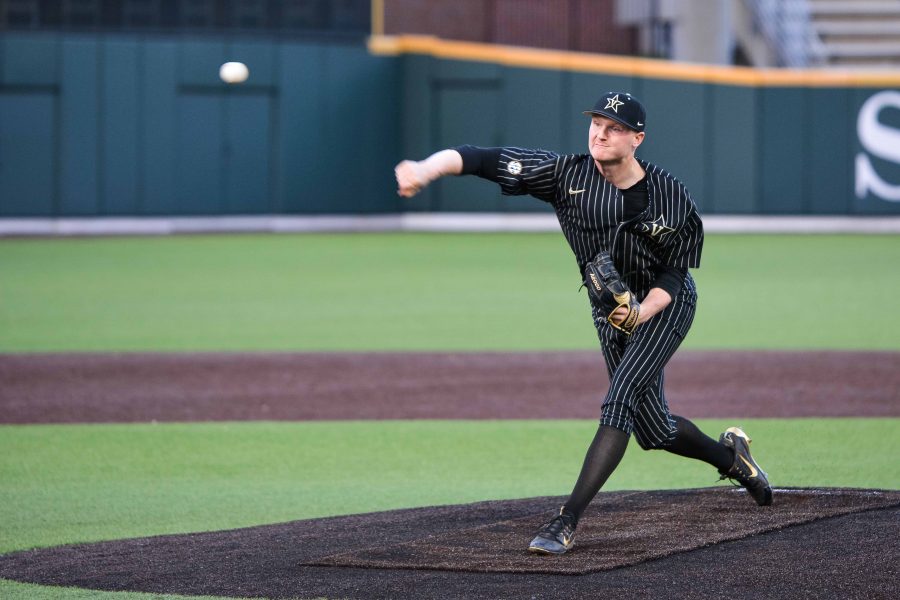 On Tuesday, an Act of God cost Vanderbilt a come-from-behind victory at MTSU.

On Saturday, it was Act of Bad Bounces that cost them a lead and a win.

Two eighth-inning errors led to all three Georgia runs, and that would be all they needed as the Bulldogs defeated the Commodores 3-2. A lot went wrong for Vanderbilt, but a lot still went right.

Here are some thoughts on Vanderbilt’s series-opening loss to Georgia.
Stranded on the Basepaths
A huge problem for Vanderbilt this season has been runners left on base. Going into Thursday’s game, Vanderbilt had stranded 252 baserunners, the fifth-most in the conference and only less than Alabama, Mississippi State, Arkansas and Missouri.

Add another 11 to that number after Thursday.

It was a problem from the get go in this game, but it was most blatant in the eighth inning. Vanderbilt had two runners in scoring position with one out before Walker Grisanti struck out and Julian Infante flew out to end the inning.

It’s the kind of problem that’s so blatant that it doesn’t even warrant discussion from head coach Tim Corbin.

“I’m not emphasizing it,” Corbin said. “I’m not talking about it. It’s like poor foul shooting. I’m not going to talk about it. We’ll do better. That’s all there is to it.”

Quite simply, the Commodores had a chance to win this game if they plated even a fraction of those 11 baserunners. But, they didn’t, and couldn’t finish the game off as a result. In SEC games against very tough opponents, every baserunner counts. You have to be able to bring guys home. If this problem continues to plague Vanderbilt, it could be a very brutal end to the regular season.
GoodFellows
Perhaps one of the few bright spots in this game was the performance of starting pitcher Drake Fellows. He was lights-out from the start, fanning five batters and allowing just six hits over seven innings of work. He stayed in to start the eighth inning and walked the first batter on four pitches. That batter eventually scored, giving him just one earned run.

It was the type of performance that deserved a “W” next to it. Corbin thought so too.

“I thought he was good,” Corbin said. “He gave us a chance to win. I thought he pitched really well. I’m proud of him. He did a nice job.”

Much like last year, Vanderbilt’s starting pitching has been their saving grace. Fellows saved Vanderbilt’s skin multiple times in this game. After giving up a leadoff double in the fifth inning, Fellows threw three straight swinging strikeouts to get out of the inning and preserve Vanderbilt’s lead.

In the seventh inning, a walk and a single put two men on with no outs. Then, a line-out, throw-em-out double-play from Ethan Paul and Julian Infante plus a foul-out to catcher Stephen Scott got the Commodores out of the jam.

Fellows looked brilliant and showed why he’s the lead starter on this team.
What the Funk
It’s a slump. A funk.

Whatever you want to call it, the Commodores are losing a lot. They haven’t lost this many in a row since Tim Corbin was in his first year as head coach.

This is a young team. A team that perhaps was riding a bit too high to start the season. Maybe the confidence just isn’t there. However, Corbin doesn’t like to see it as a trend. Each game is its own entity.

And tomorrow is a new day.

“It’s a flip of the coin sometimes with kids, but they’ve got school tomorrow, you’ve got to get right back in class and then they’ve got to arrive tomorrow with a little bit of an attitude,” Corbin said. “Sometimes, that’s what it takes. You’ve got to have that feeling inside of you that you can do certain things, and that’s where we’re going to have to get to mentally before things start moving in the direction that they need to be.”

Whatever feeling Corbin is referring to, the Commodores better find it fast or they could slide towards the bottom of the SEC faster than Alonzo Jones stealing second.