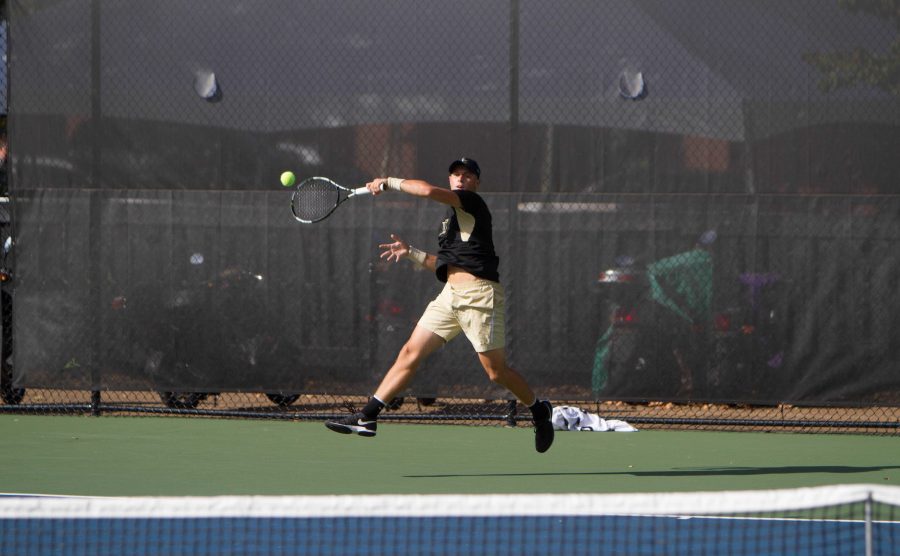 The Women’s tennis team is an early favorite to win the NCAA tournament again this year, but their male counterparts on the court are also deserving of attention for their first half of the season.

With an impressive overall record of 12-2, Vanderbilt became 3-0 in SEC play on Friday after defeating South Carolina 5-2. The Gamecocks; two match-points came after Vanderbilt had already clinched the team win at four, and even so, they went into a third set or a tie-breaker. This was the first home game that Vanderbilt was able to play outdoors, and with 70-degree weather combined with a lack of other Vanderbilt sports competing at home, the turnout was larger than usual.

Vanderbilt won 2/3 of the doubles matches against South Carolina, by all accounts, so they went into singles play with a 1-0 advantage. On the center court, Vanderbilt front man Cameron Klinger had a showdown with South Carolina’s top player Gabriel Friedrich. In the first set, Klinger and Frederich traded the lead before Klinger went on a streak, sealing the deal with a satisfying 6-3 differential. Both players were so skilled and equally matched that the majority of points scored were on balls hit just outside the out-of-bounds lines.

Because of the abundance of close calls, some of the game’s many rules of decorum were overstepped. Supported by a vocal clique of teammates, Klinger exchanged some words about a line call with Friedrich. Later in the set, Friedrich would protest (unsuccessfully) to the line judge about the crowd being too rowdy, after which he said something inaudible to the students sitting behind him. Throughout all the drama, however, there was still a compelling game of tennis being played. Klinger would go ahead 2-0 in the following set, and despite giving Friedrich life by going under 40-30 following a botched slam, Klinger would win two consecutive points to make the score 3-0. Friedrich took one back to make it a dicier 3-1, but Klinger heated up enough to make the second set score a convincing 6-1, which drew the match to a close. Vanderbilt 2, South Carolina 0.

There was never much doubt about who was going to win the match between Vanderbilt’s Baker Newman and Yancy Dennis of South Carolina. Newman went ahead 5-0 in the first set, dropped a game and then won one last one to win the 6-1 set. Dennis finally found some life in the second set with a 3-1 start. Newman was quick to close the gap, however, and soon surpassed Newman 4-3. Dennis regained his footing for a game, but just as the lights came on, Newman aced a serve and then was able to win the final match 5-3. Vanderbilt 3, South Carolina 0.

George Harwell, the Freshman sixth man who won the deciding match against MTSU this February, had the opportunity to finish the job once again, and he took it. He struggled early on in the first set when he dropped two games behind, but he rallied to tie it 4-4 before surging ahead to win 7-4. After a lull off long volleys and the score vacillating between South Carolina and Vanderbilt, Harwell was able to draw a roar of applause with his 5-3 victory in the final set. Vanderbilt 4, South Carolina 0.

Maxwell Freeman and Thomas Mayronne was a game tucked away behind the barrier, and with so many intriguing games on the right side of the court, certain observers didn’t notice what appeared to be a scrimmage-type match until they looked at the scoreboard moments before it ended. But in any case, Freeman won. Vanderbilt 5, South Carolina 0.

Court Five, which hosted the match between Billy Rowe of Vanderbilt and South Carolina’s Harrison O’Keefe, was incredibly level as the duo battled into a 6-6 deadlock in the first set before O’Keefe finished ahead 7-6. They played a ten-game time breaker instead of a third set in the interest of time. O’Keefe won 10-6. Vanderbilt 5, South Carolina 1.

Vanderbilt’s number two player, Danny Valent, had what was arguably the most exciting match of the evening. The junior won his first game in dramatic fashion, returning a soft shot and then cut off his opponent’s scorching return. This exchange would ignite a streak that would carry Valent through the first set to a 6-1 victory over Paul Jubb of Hull, England. One could nearly picture, or at least hear the two competing on a major stage as they yelled after almost every swing of the racket.

Jubb managed to hang on in the second set with some funky backspins. Valent seemed poised to have a repeat of the first set when he went 2-1, but Jubb went on a three-game winning streak that forced Valent to concede a 6-3 victory in the second set. Because the number two game started early enough, the judge allowed it to go into a third set playoff. Jubb won the first one, but Valent won the following game 40-30. Soon after, Harwell won his game, which made the contest between Valent and Jubb have significantly lower stakes.

Jubb nearly put Valent’s back against the fence by taking a 3-2 lead, but the Vanderbilt junior would rally to tie the score up 4-4. Drama ensued in the next game when Valent was leading 30-15 as a ball Valent hit barely went out of bounds. With no call from the official, Valent called over to Jubb, whose expression that while unsure was accompanied by two hands close together as if to say, “missed it by that much.” In the same pivotal game, Judd hit a ball on the back line that Valent called out-of-bounds, an assessment that was overturned by the judge. The game ended rather anti-climatically as Valent, who had already used his fault, served the ball into the net. Yet while Vanderbilt’s final individual match against USC ended in defeat, the Commodores would still win 5-2 as a team.

On Sunday, Vanderbilt looked to continue their hot streak in a matchup with the 12th-ranked Florida Gators. It was not meant to be as the Gators held off a late Commodore surge to win 4-3. Florida easily grabbed the the doubles point, utilizing their three top-15 doubles pairs to cruise to two easy wins and a lead in the third at the clinch.

After taking a 2-0 lead, the Gators conceded a point thanks to a Freeman singles victory. The Gators moved in front 3-1 before Vanderbilt started roaring back. Valent upset the sixth-best player in the country, Johannes Ingildsen, before Rowe handled his business to tie the match at 3.

It all came down to Newman on court three. After coming from behind to take the second set, Newman couldn’t hold off No. 93 Oliver Crawford, who took the third set to clinch the Florida victory.

With the loss, Vanderbilt moves to 14-3 on the season.