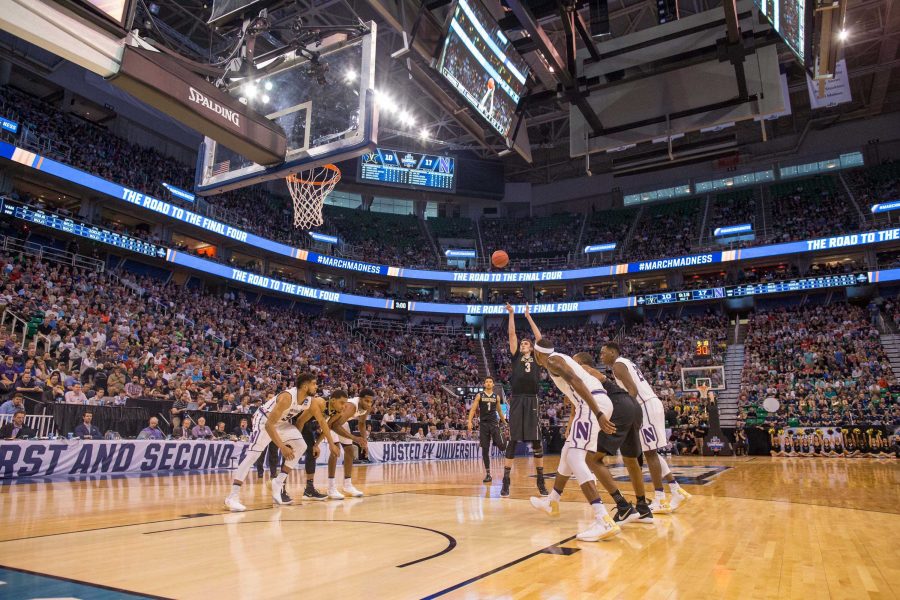 The NCAA Tournament begins this week and so our staff has been hard at work putting together their brackets in our Vanderbilt Hustler pool. It’s a tough year without Vanderbilt in the Big Dance, but we still have a lot to say about this tournament.

Some of our staff went live on Periscope to talk about it. You can check out our show here:

The Hustler Sports Staff breaks down their NCAA Tournament picks. Join us! https://t.co/e8qAfg53OP

Our staff submitted their brackets and talked about why they made the picks that they made. Here’s how our staff has the bracket shaking out.
Cutler Klein, Sports Editor

This was a tough bracket to pick because there are so many good matchups in the first and second rounds. The South region could be particularly fun, especially with a Kentucky-Arizona showdown in round two. I think the early tests for good teams leaves plenty of chances for Tennessee to get ahead and make a run (boo me, I know).

In the West, the only reason Xavier gets past the Sweet 16 is a matchup with my big upset pick, the South Dakota State Jackrabbits. Ultimately, I have Michigan out of that region because they’re the hot team with a weak one-seed. In the East, if Villanova doesn’t make it out, something crazy must have happened. In the Midwest, Duke is the strongest team and will ride depth and skill past Michigan State and Kansas.

In the Final Four, I don’t see another team beating Virginia. They have depth and defensive prowess. No other team can hang with them defensively. The only way to beat them is to rain threes on them and become a team of sharpshooters, and I cannot see any other team in the Final Four being able to do that. I have Virginia taking it all as the top overall seed.
Max Schneider, Assistant Sports Editor

There are a few things I look for in an eventual tournament champion.  I have faith in teams that have ideal size, that shoot the three at a high mark, that are coming into the tournament playing their best basketball of the season, and perhaps most importantly, I love teams that are led by a veteran point guard.  Villanova checks every box, and then double checks them for good measure.  West Virginia is the only teams that scares me on Villanova’s road to the Final Four (led by senior point-guard Jevon Carter), but the possible Player of the Year in Jalen Brunson is more than capable of handling WVU’s signature full court press and igniting the Wildcats’ offense.  Every player in Villanova’s rotation can hit from deep, and several of these guys have been in this moment just two years ago.

Virginia, Michigan State, and Gonzaga round out my Final Four.  Virginia’s defensive prowess is impossible to deny, and I truly believe Tony Bennett is the best coach in college basketball.  In a tournament where anything can happen, teams have to bring their A-game every night.  Guys can have off nights shooting the basketball, but defense never has an off night, so I fully expect Virginia to be there right at the end.  Michigan State has a very tough draw, but if any team can stop Marvin Bagley III and Wendell Carter on the way to the Final Four, it’s a team with the Big Ten Defensive Player of the Year and soon to be lottery pick in Jaren Jackson Jr.  The Spartans have the size to combat Duke’s post play and overwhelm Kansas in the Elite Eight.  Gonzaga is the wildcard here, but this team is an offensive juggernaut, led by a veteran point guard in Josh Perkins and two dominant post-players in Jonathan Williams and Killian Tillie.  The Zags also hit 37.4% of their threes.

Double-digit seeds to look out for include New Mexico State, Providence, Charleston, and San Diego State.  New Mexico State has a signature win over Miami, and rebounds the ball extremely well thanks to 6’5 guard Jemerrio Jones, who totals 13 boards a game.  Providence has a Sweet 16 aura about them, and Ed Cooley has his guys playing their best basketball in March.  Look for them to potentially take down an over-seeded North Carolina squad.  Charleston and its trio of scorers will look to take advantage of an injured and skidding Auburn team, and San Diego State is riding a nine-game win streak, and has the size to overwhelm Houston.
Betsy Goodfriend

I have a couple big upset picks, namely Nevada in the Elite Eight. Nevada averages 83.3 points per game and is led by six upperclassmen who are among the team’s top seven contributors. Additionally, Nevada was 12-3 in true road games this season, which is tied for the most wins of any team in the country. Nevada’s quick tempo and success on the road should allow the Wolfpack to reel off a few wins. I also have Stephen F. Austin beating Texas Tech in the first round. I like Stephen F. Austin’s tournament experience and excellent offense, which are two things I look for when picking upsets. Also, the Lumberjacks lead the nation in defensive turnover rate. Texas Tech went 1-2 against West Virginia this year, a team with similar defensive strengths to Stephen F. Austin.

I also have St. Bonaventure making it to the Sweet 16. I don’t trust Florida’s shooting, because when the Gators’ shots aren’t falling, they are extremely vulnerable to upsets. I think Missouri knocks off Xavier in the Round of 32 because Michael Porter, Jr. is more talented than anyone on Xavier’s roster. While he has missed basically the entire season, the fact that Missouri still safely made the tournament is impressive and shows that the Tigers are not solely dependent on him like Oklahoma is on Trae Young. Porter also has barely any college game tape, and he could catch Xavier off guard in the two-day turnaround between the first and second rounds. I have Michigan making it to the National Championship game because they are a hot team on a nine-game win streak and only allow 63.5 points per game (8th best in the nation). But, I think Duke is hard to bet against in March. Duke is also incredible balanced as one of only two teams in the country to rank among Ken Pomeroy’s top 10 in both offensive and defensive efficiency (7th in defense and 3rd in offense).
Simon Gibbs

My East region is a hot take to say the least, but hear me out: West Virginia is a dangerous team seeking revenge. Last season, they showed just how effective their full-court press can be—they beat Bucknell and Notre Dame, only to lose by 3 points to Gonzaga. Obviously, Gonzaga lost to North Carolina in the National Championship, so that team was no joke. This season, “Press Virginia” comes into the tournament rather hot, after overcoming their midseason woes. Lastly, ‘Nova nearly lost to (should have lost to) Providence in the finals of the Big East tournament… Scary. My final four includes Virginia, UNC (how could you possibly root against a 2-seeded Roy Williams team?), West Virginia, and Michigan State. Despite looming allegations, I expect Tom Izzo’s talented Spartans team to overcome the likes of Duke and Kansas in the Midwest region. Ultimately, I’m rolling with a UVA vs. Michigan State final, where Virginia’s defense will overpower Miles Bridges and Jaren Jackson Jr, giving Virginia their first national title.
Alyssa Muir

It was tough for me to pick Michigan State to win it all because they are in the extremely talented Midwest region. However, I think the Spartans experience and depth combined with the start power of Miles Bridges will carry them to a championship. This year, I surprisingly did not end up putting a single number one seed in my final four because I think the two and three seeds are equally as talented. My big upset picks are UNC and Kansas getting knocked out during the first weekend.
Will Wang

I am pulling up from deep with my first-round picks, picking 11 upsets (not including #9 Alabama over #8 Virginia Tech). The greatest number of upsets that has occurred historically in the first round is 10, happening in 2016, meaning my bracket is definitely hoping for a crazy first couple of days of action. However, I tried not to pick against teams that could make a strong run deep into the tournament in order to minimize the damage to my bracket when some of my upset picks do not pan out.

I played it safe in the second round, picking just one upset, Nevada, a team I am riding all the way to the Final Four on the back of their up-tempo team with versatile sweet-shooting wings. I focused on pushing forward safe bets in Villanova, University of North Carolina, Purdue, and my projected winner, Duke, four teams that profiled well compared to previous national champions. Each of these four teams ranks highly in offensive and defensive rating, relies on a senior or experienced player, has a great point guard, and has a go-to crunch-time player.

Personally, I am most excited to watch how NBA draft prospects perform under the spotlight in these big games.

If you get nothing else out of this bracket here it is: Davidson over Kentucky in the first round. The more times I say it, the more likely it is to become true. While almost a lukewarm take at this point because so many people also have this upset, I still encounter my fair share of naysayers. though a not insignificant number of them admitted that their distaste for tours of the Davidson campus in high school influenced their choices. I suppose that’s a more logical method of choosing picks than mascots or team colors, but there’s a reason why the girlfriends, often but not always having wasted few hours each year in front of a TV screen watching college basketball, always end up winning the bracket pool: March Madness is unpredictable. So, with this in mind, I will try not to embarrass myself on the world wide web with incorrect takes and bracket picks, but my hope is that you’ve already filled out your bracket by this point and thus can’t hold me responsible.

But more on this Davidson-Kentucky matchup. I grew up in Nashville as a die-hard Commodores fan, and I have to say, after seeing Memorial get invaded by Big Blue nation every year, I’m not exactly a #Catsby90 kind of guy. The same goes for the Volunteers, but I have them going to the Sweet Sixteen. Sigh.

But for a moment, let’s consider Davidson. The diminutive Charlotte, NC college produced Steph Curry and a baseball team that by making it to the Super Regionals, captivated a small percentage of the country who watched the College World Series. The basketball team upset URI in the always competitive A10 tournament in MSG. The point is, Davidson is the underdog’s underdog. If you enjoy watching Vanderbilt’s 3-pointers, this is a must watch team in a must watch game.

I figure if I chose a bunch of upsets, one of them is going to be right and make me look smart. Montana, Providence, Loyola-Chicago, and St. Bonaventure are my upsets.

I’m basic so I picked UVA to win the championship. But how could I not? They made Vanderbilt look like my rec-ball team and embarrassed the defending champion Tar-Heels. I heard some protests from the hosts of VandyRadio sports-talk show On the Road with Max & Ax (Tuesdays at 4, after Riley’s Rock Radio,) that discussed Virginia’s injuries, but unlike Kentucky’s high-flying offense, the wall that is Virginia’s defense can stand to lose a few bricks.