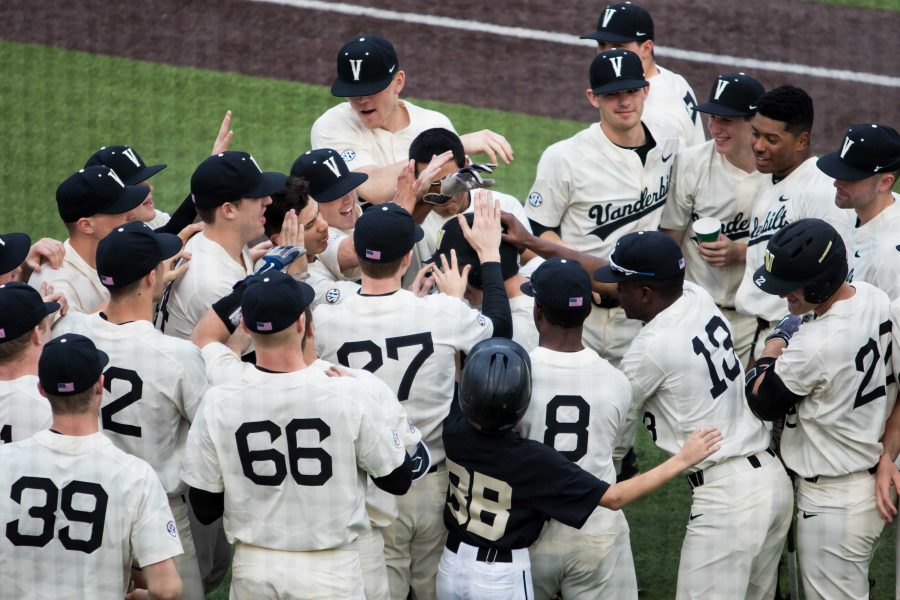 After shining in the opening weekend against Duke, the Vanderbilt Commodore freshmen continued to dominate every aspect of the game in a 15-2 shellacking of Presbyterian College. Vanderbilt moves to 4-1 on the season with the victory.

Jake Eder made his first collegiate start and allowed just one hit through four scoreless innings of work. The lefty had four strikeouts and was in control the entire time. Eder was credited with the win.

“He’s got a good arm He’s got a nice delivery. He’s strong,” said Corbin of Eder. “That’s a starting pitcher in the making. You find him in the pitching lab all the time.”

The offense took an early lead with freshman Philip Clarke’s three-run homer to right field in the bottom of the first.

Vanderbilt tallied ten walks and stole six bases. This small-ball approach plated a run in both the third and fourth innings to put the Commodores up 5-0 through four innings.

The six stolen bases were Vanderbilt’s most since stealing seven bags against Auburn in May 2016.

In the third inning, Julian Infante hit an RBI groundout to score Ethan Paul from third base. In the fourth frame, Alonzo Jones, Jr. scored an unearned run after Connor Kaiser reached first on an error.

Eder was relieved by another freshman, right hander Justin Willis, to start the fifth inning.

Willis got into a jam in the top of the sixth inning, and AJ Franklin replaced him.

Franklin, a redshirt sophomore making his first appearance in black and gold, entered the game with runners on first and second and one out. Franklin forced Presbyterian’s Nick Wise to ground into a double play to end the inning.

Austin Martin had a terrific game as the leadoff hitter. Martin went 1-for-2 with two walks and stole three bases. He scored on a wild pitch by Presbyterian’s Grayson Stoneking in the bottom of the sixth inning.

Martin said, “over the fall, we worked on our jumps and our leads,” and this helped the team steal bases with ease.

Freshman Pat DeMarco entered the matchup with a .647 batting average, but went 1-for-4. He found other ways to contribute and had a diving catch in the top of the fourth inning that was worthy of any highlight reel.

DeMarco, after going 0-for-3 to start the game, crushed an RBI double in the sixth to plate Connor Kaiser and put Vanderbilt ahead 7-0.

Paxton Stover relieved Franklin to begin the seventh inning. Stover, a senior, had a 6.41 ERA in 19.2 innings of work last season. He threw two strikeouts in one perfect inning of work.

Julian Infante led off the bottom of the seventh with an RBI double over center fielder Guy Casaceli’s head. He was thrown out at home on a fielder’s choice.

Most of Vanderbilt’s starters were either replaced or pinch hit for in the seventh frame.

Kaiser lined an RBI single up the middle to score Garrett Blaylock and Walker Grisanti to widen the Commodores’ lead to 9-0.

Justin Wilson entered to pitch in the top of the eighth. After missing all of last year with an elbow injury, Wilson pitched a clean 1-2-3 inning.

In the eighth, Ty Duvall scored on a Blaylock double to right field. An error by Rob Greco allowed Grisanti, who singled earlier in the inning, to score and make the score 11-0.

The lead stretched to 13 when Garrett Blaylock scored on a throwing error, and Cooper Davis scored on a wild pitch.

Freshman Aaron Brown allowed two runs to the Blue Hose in the ninth, but still earned the save.