Luke Kornet enjoying transition from Vanderbilt to the pros 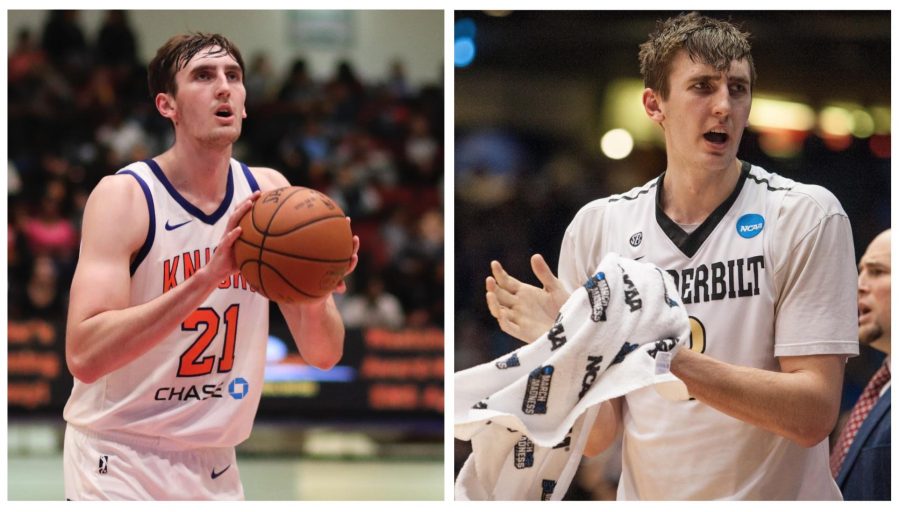 Kornet is injured and will not play in the evening’s contest with the Salt Lake City Stars, but he’s still up and at ’em, making his way to the Westchester County Center for a film session and shootaround.

Just nine months ago, Kornet was a fixture for Bryce Drew’s Commodores, helping to lead the team to a surprise NCAA Tournament appearance. Now, he’s a major force for Westchester on a two-way contract, and he’s working his way towards a spot on the NBA roster.

“It’s been great,” Kornet told The Vanderbilt Hustler at the Westchester County Center, home of the Westchester Knicks. “The basketball is so much different just with the rules and spacing and everything on the court and stuff like that.”

“I loved playing at Vandy and all that time. I’m really enjoying basketball here and the whole schedule and everything. It’s a lot different than college because I can focus on just basketball as opposed to having everything with school and all of that. It’s fun to be able to really just focus on basketball.”
The Transition
Leaving college in the heart of the south to play professional basketball in suburban New York sounds like a daunting change.

However, for Kornet, there wasn’t too much of an adjustment period because all he was doing was picking up a basketball and playing.

“Honestly, you go throughout the summer from pre-draft stuff to the summer league and it’s really easy because you’re just playing basketball,” he said. “The adjustment was more like what are you going to do with the free time that you have, as opposed to college where your whole day is scheduled. The adjustment period really was nothing compared to going from high school to college.”

After going undrafted in the 2017 NBA Draft, Kornet signed a two-way deal with the Knicks. This is the first year that teams can sign players to two-way contracts, which allow the player to spend the season in the G League while also being able to spend 45 days with the NBA club.

While he hasn’t seen any NBA game action yet, Kornet said he has spent time practicing with the big club throughout the season. He also got to spend training camp and the preseason with New York. That time helped Kornet learn just by watching how the pros handle their business on and off the court.

One of the guys he’s learning from is 7’3” Knicks star Kristaps Porzingis, who has been called a “unicorn” because of his versatility on the perimeter in spite of his massive size. Kornet has a very similar skill set, and had the chance to emulate some of the things Porzingis does on a nightly basis.

“Being able to guard him some in training camp and just watch him play throughout it,” he said of Porzingis. “I started trying to apply some of the stuff in terms of like, he’s so great in mid-range facing up and I think just being able to shoot over guys is something.”

“He’s a little bit taller than me, but honestly I can kind of do it to guys down here as much as he can. I’m just trying to get better in just my comfort in shooting over guys and also just using my dribble more because I tend to be more primarily catch-and-shoot, but I can definitely dribble more to get some better, cleaner looks. That’s something I watched in him and try to do.” 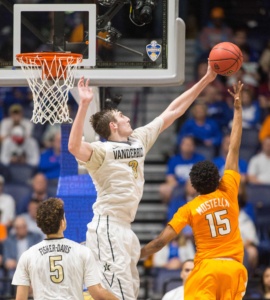 This offensive prowess that Kornet is learning from Porzingis is just half the battle. In the professional ranks, defense is at a premium and in order to make it at the highest level, you cannot be a defensive liability. According to Westchester head coach Mike Miller, that has been one of the many areas in which Kornet has significantly improved.

“I think it’s across the board,” Miller said. “I can’t say one thing. I see a lot of things. I see his defensive presence and rim protection and the verticality plays and the thing that maybe doesn’t stick out, it’s not on the box score is what he does to facilitate offense for guys. Not only does he stretch the floor because he makes shots, but he keeps the offense flowing and moving and does a lot of different things. He’s got a very high IQ for that.”
The Nashville Connection
Despite being away from Music City, Kornet still feels a bond with Nashville, and with Vanderbilt. He’ll still watch his old Commodore teammates play on the hardwood like any member of Commodore Nation.

It was a bit weird to be watching from afar at first, though.

“It’s kinda funny being the alum-type thing of just watching them on TV and especially with Matt [Fisher-Davis], Riley [LaChance], Jeff [Roberson], Joe [Toye] and Djery [Baptiste] and all of the guys I’ve played with,” he said. “I’m still very much invested in them and once you’re kind of a teammate with them, you’re teammates for good. I’ll watch and keep track and even with football and everything like that, I still watch.” 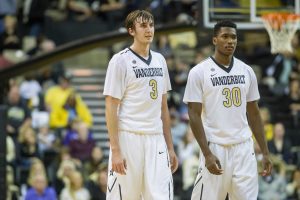 There’s an idea that no matter where you are, there’s always a Nashville connection.  Nowhere is that more true than the ranks of professional basketball, both in the United States and abroad. Some of Kornet’s teammates, like Wade Baldwin IV and Damian Jones, are still in professional basketball in the U.S., while many alumni have played or are currently playing around the world, such as John Jenkins, Jeffrey Taylor, Festus Ezeli, Lance Goulbourne, Brad Tinsley, Jermaine Beal, A.J. Ogilvy, Shan Foster and Derrick Byars.

Vanderbilt basketball is a family in that regard, and Kornet feels honored to be a part of that legacy of ‘Dores in the Pros.

“There’s a lot of guys that I’ve been in contact with and are close with,” he said. “That class of Jeff and Lance and Festus and John. Those are all people that I talk to and I’m grateful for. Older guys like Shan and [Matt] Freije and even them, DB [Byars] and stuff. There’s a lot of guys that have had the experience of playing professional basketball and we’ve had some really talented players at Vanderbilt.”
Big-league goals
It’s now 4:00 PM, and even though he’s not playing in the game, Kornet gets back to the arena to get loose and warm up. After he takes the floor, he stretches out with the other big men on his team. He then proceeds to take his warmup shots from the perimeter and inside.

When he is healthy and playing, it’s just business as usual for Kornet. Even though he has the goal of eventually playing in the NBA, he doesn’t go into a game trying to flex his skill set or emphasize something he’s working to improve on.

He just played basketball like only Luke Kornet knows how.

“Honestly, the biggest thing I think about with like getting ready for other games is I should be playing the same type of basketball you would no matter who you’re playing with,” Kornet said.

“Especially now, I want to be able to space the floor and shoot the ball, but I think being able to make plays for others and if action is dead, being able to start something with a handoff or being someone to throw to, get some motion going, is something that I really try to do. Also defensively just guarding ball screens, those are the biggest emphasis for me on a daily basis.”

The Knicks didn’t need Kornet to dismantle the Stars by a score of 98-83. Kornet would return for their next game, and in the week after returning, he put up a whopping 31 points in a loss to the Wisconsin Herd. 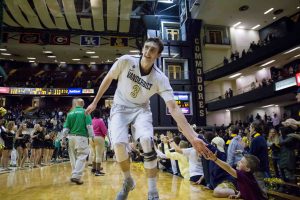 Knicks guard and former Michigan star Trey Burke put up 28 points in Westchester’s win over the Stars. Even with the stellar performance, he knew he could have had a much easier time taking care of the Stars with Kornet on the floor.

“It’s so good to have him because he stretches the floor so well,” Burke said. “His IQ, he’s able to move the ball. He gets off the ball and if he doesn’t have his shot, he might pass it to one of the guards and he sets the screen. He can roll to the basket and get a dunk or he can pop. A lot of bigs his size don’t have that skill set.”

NBA fans, especially Knicks fans, have been spoiled by rookies that make it to the big league instantly and take it by storm. However, Kornet knows that his journey to the NBA will be about trusting the process.

With that being said, he wants to use this year as a springboard to make the NBA next season.

“Getting all of this game experience here I think is great for me to pick stuff up going into next year, I’ll be even more established of a player and know what a big guy needs to know in this league,” he said. “I definitely want to put myself in a situation where I’ll be able to play with the NBA team next year.”

“I’m feeling great with the Knicks and I feel like they’re definitely invested in my development and stuff like that. After the end of this season, you kind of see where it is, but right now it’s just focusing and getting better day by day and I think I’ve been able to do that for the most part, which is great.”

Based on his numbers, that goal is most definitely in reach. And as he continues on his journey to the NBA, his biggest supporters who were in the stands night in and night out at Memorial Gym will still be there: his family. While Kornet had to be a spectator for his team’s victory over Salt Lake City, another Kornet also got to be a spectator: his sister Nicole. Later in the week, his mom Tracy came to town to see her son play, much like she used to every night when he was a Commodore.

“They don’t really care how I play, they’re just going to be your family there at the end of the day,” he said. “They were always there and watching, whether it was my sister or brother away from town and stuff.”

“It’s something that’s really important and that I don’t take for granted.”